Just a brief post today about another new bike (and wheel) recall. Trek has announced a safety recall of their 2015 - 2017 720 touring model equipped with disc brakes and Bontrager 24 spoke wheels. Apparently the front wheels have been suffering many broken spokes, and the concern is that the broken spokes can lodge in the front brake caliper, causing an immediate stop and likely a "header." The Bontrager TLR 24H disc wheels, which are standard equipment on the 720, but are also available separately as aftermarket wheels, are part of the recall.

You know the drill. Immediately stop riding the bike (or the wheels) and go to the nearest Trek dealer for replacement. After new wheels are installed, the affected owners will be given a coupon worth $100 in Trek/Bontrager merchandise. Hooray.

The full text of the recall notice can be found at Trek Bicycles.

I don't know how many Retrogrouch readers would be riding the latest 720, but I assume they're more likely to be on a 720 than the latest carpet fiber Madone. Readers might recall that I wrote about the current 720 and compared it with the original 720 grand touring machine last year. If I were presented with a choice between the old and the new, I (and most readers) would probably choose the 1980s original. 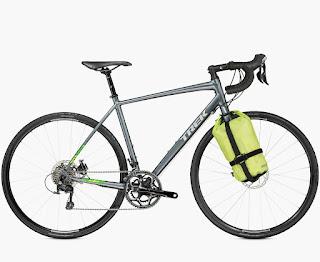 One thing that this recall brings to my mind is the sense of using 24 spoke wheels on a "touring" bike. Seriously - who thought that was a good idea? Yes, compared with a lot of the latest high-end boutique racing wheels (where as few as 16 spokes is becoming commonplace), 24 spokes might seem like a "sensible" choice. But to me, it's just another case of "racer mindset" working its way into bikes where it doesn't belong, and having 24 spoke wheels makes me question whether the bike is really intended for touring.

It's worth mentioning that the replacement wheels are also 24 spokes. Pssshh.

Realistically, I know that the spoke breakage problem isn't necessarily the result of the spoke count. There are a variety of factors that could be leading to the rash of breakages - but it does make a person wonder. Also, keep in mind that the stresses on a bicycle wheel with disc brakes are different from those on a bike with rim brakes, so that may be a contributor.

Obviously I'm pretty conservative when it comes to wheel design. My "ideal" set of wheels for a touring bike would use 36 spokes front/40 rear. For general road use, I love 32 front/36 rear. If I still weighed what I did in college (125 lbs!) and wanted a real killer set of racing wheels, I might have gone for 28/32, and still I would have saved them only for racing, and only on good roads. Readers may notice that I favor using slightly fewer spokes on the front wheel than the rear, as I like to balance the number of spokes with the weight distribution or load that each part of the bike carries. Some people are big on symmetry and go with equal numbers front and rear (and of course, hubs are usually sold in "matching" sets like that - so if you want to mix it up like I do, that sometimes creates a little extra work in sourcing components). But to my mind (and eye), having the spoke count match the load presents its own kind of symmetry.

Okay - I guess this wasn't that brief of a post after all.
Posted by Brooks at 12:43 PM