As a sport, bicycling has a woman problem. Long considered primarily a sport for men, bicycling has struggled to attract women in recent years, and every time the sport, or the industry, takes what appear to be positive steps to make it more inclusive, something else will crop up to show just how far there still is to go.

Remember these?
Or this?
One questionable element of bicycle racing that has come under fire in recent years is the tradition of the "podium girls" (or "hostesses" as they are officially known). It's a familiar sight at the end of any major bicycle race to see a couple of beauty queens planting kisses on the winner -- a blatant display of objectification and pandering if there ever was one. The fact that it is still commonplace in the current era is a bit of a head-scratcher anyhow, but it seems to me that the curiosity graduated to outrage after the 2013 Tour of Flanders when 2nd place finisher Peter "Mr. McFeely" Sagan grabbed himself a handful of podium girl Maja Leye:
Leye later reported that her instinct was to slap Sagan, but stopped herself because she feared that such a reaction would probably result in more consequences for her than for her violator. She was probably right - and if that doesn't perfectly explain the problem, then I don't know how else to explain it.

And just to show how tone deaf people in the sport and industry can be, after that well-publicized groping incident, E3 Harelbeke decided to make it part of their promotional campaign in 2015.

One of the things that I think is really disappointing about the podium girl issue is that there are so few ways for women to distinguish themselves in bicycle racing -- the number of women's races being so much fewer than for men. UCI leadership has little to say about the issue of podium girls, but has all kinds of regulations and limitations on women's racing that almost seem to send the message that appearing as a "hostess" is somehow a more legitimate or acceptable way for women to stand on a winners' podium or to participate in the sport. 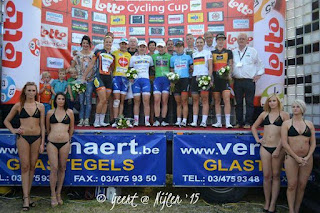 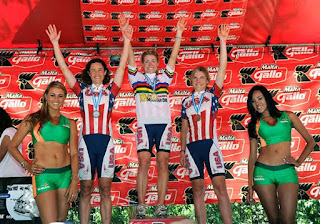 At some women's races, promoters have taken the "enlightened" step of having male "hosts" (podium boys?) to present awards to the victors:

So where am I going with all of this?

Well, it seems that somebody in the sport has decided to do something to address the issue. At this year's Tour Down Under in Australia, which is like the season opener of the UCI racing calendar, there will be no podium girls handing out the awards. The South Australian government, which apparently provides some funding and support for the race, withdrew support for having female models on the podium. Instead, junior-level cyclists will present awards -- a move that they hope may help to inspire young athletes far more effectively.

As a father of two girls, I can say that I would much prefer to see them aspire to making it onto a podium as race winners than as models to be ogled -- valued for their strength as much as for their looks.

Not all races on the UCI calendar will be taking this step. In fact, it's more than likely that most of the big races, like the Giro d'Italia and the Tour de France will still continue the outdated tradition. It may be a long time before the change becomes widespread.

Though it isn't saying much, we should at least take comfort that cycling's podium girls aren't treated like the women in professional motorsports like Formula One and Grand Prix racing:

In fact, it seems that humiliating the women on the podium in auto racing has become a major part of the "tradition." Run a Google Images search for "Grand Prix (or Formula One) Podium Girl" and the majority of the images that come up are of women being treated in similar fashion.

I know there are lots of people who think it's all just good fun, but just because there are women willing to sign up to be podium girls doesn't mean it isn't a problem. It's a question of value and opportunity. Looks are valued over other attributes to the extent that lots of girls grow up thinking that it's the only way to be accepted or valued. And the opportunities to prove themselves in other ways are limited or downplayed. It probably doesn't even occur to many that they could be the winner - and not just the prize.

I'm going to have to give "cheers" to the Tour Down Under for taking a stand, and hope that others may follow suit sooner rather than later.
Posted by Brooks at 12:55 PM