Remember Zwift, the computer-interactive stationary trainer for social-media-obsessed indoor cyclists? Well, why should adults be the only ones who get to pedal indoors while staring at an LCD display? As if to prove the point that nobody is too young to target with lobotomizing computer screens and hamster-wheel trainers, Fisher Price has just introduced the Think & Learn Smart Cycle for the preschool set. 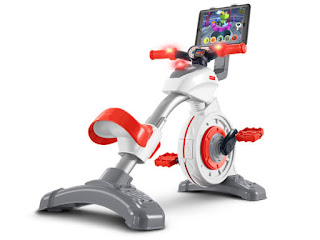 The Smart Cycle is a plastic stationary trainer that pairs up with a computer tablet - and might probably remind people of something like a toddler turbo trainer, or "Kiddie Zwift." Various learning/gaming apps will be made available to keep the kiddies occupied while they pedal.

Okay - I know that it's an unfortunate fact of life that a huge percentage of American kids today are already spending a disproportionate part of their day fixated on smartphones, tablets, computers, and television screens. No doubt they have screen-time overload. Do we really need to encourage it? And I get that having the little tots pedaling something as part of their entertainment - even a mini stationary bike - is probably better than having them lying around like couch slugs while they stare at their digital screens. But there's still something about this whole thing that I find really disappointing. Maybe even a bit unnerving. I don't believe we need another device to substitute virtual reality from actual reality.

Fisher Price claims that the Think & Learn apps will be educational (one of the games has kids pedaling down a cartoon-like road to find the letters of the alphabet, for example), and they cite research that says kids learn more and retain more when they're active. That might be so, but something tells me (and as a full-time teacher, I think I have some insight on this) that a child's learning and retention is better when they are active and interactive with an actual human being (parents come to mind -- studies show that most children have human parents) as opposed to an LCD screen. I'm also not convinced that many kids would be motivated enough by the apps to choose the Smart Cycle over the normal passive computerized entertainment.

Wouldn't it be better - physically, educationally, and socially - to actually take the kids out for a bike ride? Parents and children together - riding, talking, laughing, and interacting? I guess that would be asking too much of parents who can't break their own technology addictions.
Posted by Brooks at 2:13 PM