The cycling world has a new Hour Record champion to celebrate. No, Bradley Wiggins's record of 54.526 km is still standing (that's 33.88 mph for us Amuricans). But on Jan. 4, a diminutive 105-yr. old Frenchman, Robert Marchand, set a new world record of 22.547 km/hr (about 14 mph) for his age category. If I understand correctly, the 105+ age category had to be created just for Marchand. 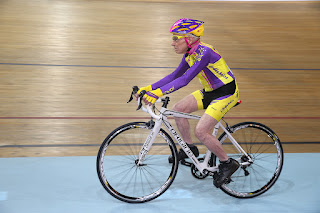 Marchand rode 92 laps at the Velodrome National near Paris and was surrounded by a large cheering crowd at the end of the hour ride.

According to reports, Marchand believes he could have done even better. He told the AP "I did not see the sign warning me I had 10 minutes left, otherwise I would have gone faster. I would have posted a better time." I don't know how many other people are out there capable of riding 14 miles in an hour at over 100 years of age, so who knows how long Marchand's record might stand.

Marchand is a former fireman who didn't really get active with cycling until he was 68 and retired. But since then, he has completed a number of impressive cycling feats. In 1992, at age 81, he rode from Paris to Moscow. And he previously held the hour record of 26.927 km for someone over age 100, and the record for the fastest 100 km for a man over age 100.


Just imagine all the things this man must have seen and experienced since his birth in 1911. And to think that he's up and riding nearly every day. That's something worth celebrating, and a great way to begin a new year.
Posted by Brooks at 12:11 PM