I started getting serious about bicycles back in the mid-1980s. At that time, Campagnolo Nuovo Record and Super Record were THE components to get. If you couldn't afford that, you got SunTour or Shimano (French choices from Simplex and Huret were already getting scarce, or at least that's how it seemed to me at the time). The SunTour derailleurs were among the most affordable, though they were also probably the best shifting ones of all at that time. Around 1985 or so, Shimano released their new and improved Dura Ace 7400 series derailleurs and shifters. Borrowing the basic geometry that had been patented by SunTour in 1964 (the patent had just expired), Shimano added a spring to the upper pivot, and with their special clicking shift levers, created their first SIS (Shimano Index Shifting) system that could reliably "click to shift" from one gear to the next. That derailleur was a real beauty -- and so was the whole group, for that matter. But with that Dura Ace system, the indexing era was born. Indexing begat the STI (Shimano Total Integration) of integrated brake/shift levers, and Ergo (Campagnolo's version of integrated brake/shift levers). Now, it's Electronic Shifting -- Di2, and EPS (Shimano and Campagnolo, respectively). Let's take a look at the mid 80s Dura Ace and the 2013 versions. . .

And compare the cranks. . .
The Di2 front derailleur is just downright scary-looking. 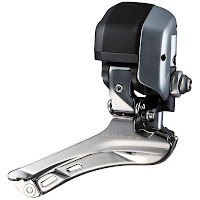 The components have just become so bloated-looking, and this goes for the whole group. The earlier versions have a compact, tidy look, with a great balance of crisp angles and curves. The new ones are huge, misshapen, and the electronic versions especially have these massive growths to house their servos. Then there are the battery packs and control boxes that have to be appended onto the frame like tumors.
As far as aesthetics goes, I don't think there's any comparison between the old and new. I'll talk about other aspects (like, is electronic shifting really such an improvement?) in a later post. Keep tuned. . .