Riding a Bike: You're Doing It Wrong

Look at some of the recent headlines you'll find in the mainstream cycling magazines and websites:

Why Everyone Should Take a VO2 Max Test

Get The Perfect Pedaling Stroke 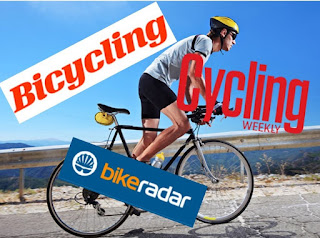 Pain Is The Cycling Coach You Didn't Know You Had

Why You Should Invest In A Bike Fit This Season

The Ultimate 30-Minute Get Fast Workout

Rookie Cycling Errors That Will Ruin Your Ride

Ten Cycling Accessories That Will Transform Your Ride

Why You Should Throw Your Rim Brakes In The Trash

Honestly, you'd think that riding a bike was some kind of ancient unsolved mystery, and the magazines, blogs, and websites seem determined to convince us that whatever we're doing, we're doing it wrong. We're using the wrong bike. The wrong accessories. The wrong wheels. The wrong tires. The wrong brakes. We're apparently pedaling wrong, and even breathing wrong.

I'm not going to say that there aren't certain skills involved in bicycling that can't be improved upon, but I really wonder how many people learn to improve upon them by reading these "self-help" articles. In fact, the people who are probably the most in need of help are probably those who would never read a cycling magazine or website in the first place. Certainly, riding in traffic requires not only a good bit of skill, but also a fair amount of nerve. Just understanding the rules of the road (and realizing that they apply to us cyclists as well as drivers) is a big part of it. The "nerve" aspect of it isn't something a person gets from reading articles, though. I've found that the people who are most comfortable in traffic are those who have the most experience in dealing with traffic - and those who started sharing the road with cars at a younger age are often more comfortable than those who avoided riding among cars until they were well into adulthood. Riding with a group requires certain skills too, but again, a lot of it comes from riding with groups.

The "go-fast" workout advice and coaching tips have always struck me as a waste of time, too. I've always gotten the impression that people who take that stuff seriously are still hacks on the bike, and annoying to talk to, much less ride with. They talk in numbers - RPMs, watts, intervals, heart rate, and O² levels. They talk about "spanking" the climbs, and take pictures of themselves at the end of a ride with their bikes held aloft as if they've just done something unique (Dude - you rode your bike, just like millions of other people who don't even own cars). The "victory" pictures get posted to Facebook, because if it's not on social media, it didn't happen.

Then there are the articles about how this component or that accessory will change your ride - or even change your life. Electronic shifting. Disc brakes. Smart phone integration. Power meters. Carbon fiber anything. What most of these things have in common is that they almost always require buying a whole new bike (perhaps I should say another whole new bike). The recent article about "Why you should throw your rim brakes in the trash," which appeared in Outside magazine, is pretty much the epitome of why I can't take such magazines seriously. Throw your rim brakes away - which means, by extension, throw your whole bike away too. If it doesn't have disc brakes, it's hopelessly obsolete and worthless, right? Never mind that the vast majority of bikes being ridden today have rim brakes, and somehow their owners are not careening out of control to their doom.

The Outside article cites a head-to-head comparison between a Trek Domane SLR 8 with carbon fiber rims and rim brakes and a Trek Domane SLR 7 with hydraulic disc brakes. Well, right there is a major problem, because rim brakes on carbon fiber rims are probably the worst braking combination a person could devise on a modern bike. And that's the head-to-head comparison model? They might as well have compared it with the braking of rock-hard 1970s-era brake pads on chromed steel rims. In the rain. Carbon fiber rims are probably the best justification for disc brakes on road bikes today. In trying to shave every gram of weight, wheel manufacturers have been pushing carbon fiber rims - but the braking on them is notoriously bad. So disc brakes are the solution to a problem that can largely be avoided by not "upgrading" to carbon rims. Modern dual-pivot brakes paired with high-quality aluminum rims work amazingly well with very little effort. Later generation higher-end single-pivot sidepulls also work great, and in my opinion, have better modulation. It's only a matter of time before disc brakes take over completely - but I'll never buy a bike specifically to get them.

Despite what the articles say, I'm also quite certain that I will not be getting a VO2 Max test this year, (or next year, or any year for that matter), nor would I recommend it for anyone who isn't getting paid by someone to win bike races. If I was making a significant investment in a brand new custom bike, I might opt for a fit session to make sure I get the best bike for my body, but otherwise I'm not going to shell out for one just because someone who doesn't know me thinks I should. Nor do I think a bike accessory has ever transformed my ride, much less my life.

Riding a bike is a deceptively simple thing -- so simple that people are always eager to overthink it, and to try to get us to do the same. I mean, most of us probably learned how to ride before we got out of the 1st grade, if not sooner. And there's some truth to the old saying that you never forget how. Millions of people enjoy riding on bikes that might be dismissed by some bike snobs as crap, but which get people where they're going cheaply and reliably. Most of us enjoy riding and get a lot out of our time on a bike, whether or not we know our O² levels, our heart rate, or how many watts we're expending. We're happy to use our thumb and forefinger to decide if our tire pressure is "about right" and leave it at that.

Enjoy your ride - don't overthink it. If you're not a danger to yourself and those around you, how "wrong" can you really be?
Posted by Brooks at 10:23 AM