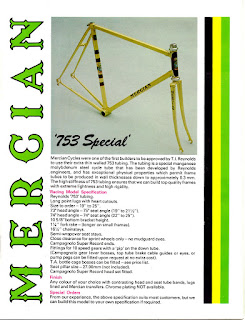 It's my spring break from work, so I've had some time this week to work on a pretty awesome project: a 1979 Mercian 753 Special. It's now mostly finished and ready for some photos.

As mentioned in an earlier post, I believe 1979 was the first year that Mercian offered a model built with Reynolds 753 tubing. According to the book The Custom Bicycle by Kolin and de la Rosa, by 1978 the only 753-certified builders in the U.K. were Raleigh, Bob Jackson, and Harry Quinn. At the time they were being interviewed for that book, Mercian owner Bill Betton said they were looking into using the special heat-treated tubing, but hadn't yet decided, and had not yet sought certification for it. But according to the serial number, this frame was built some time in 1979, and by 1980 the model was listed in the company's catalog. I suspect (but can't say for certain) that there can't have been many frames built with 753 prior to this example of mine.

When I got the frame last fall, it had a busted cable guide and would need new paint, but the price was low enough that I figured it was worthwhile even with the cost of the renovation added. I already had most of the parts needed to complete the bike, but I did want a top-level pair of tubular wheels for it, which I felt would be the right choice for a special racing frame. While the frame was off at Mercian Cycles being renovated, I spent some time sourcing the right vintage rims and hubs, then built the wheels last month.

Why did I go with Mercian for the renovations? There are very good painters much closer to home, but the price of renovations at Mercian is really competitive, and the exchange rate right now is as good as I've ever seen. The price of shipping back and forth to the U.K. is the big downside. Ultimately, the renovation itself was cheaper than keeping it in the U.S., but the shipping cost eliminated any savings so the price would have been about the same either way. But the idea of having the frame renovated by the same folks who originally built it was enough to tip the scale. 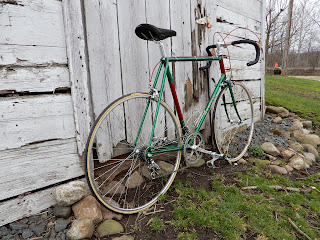 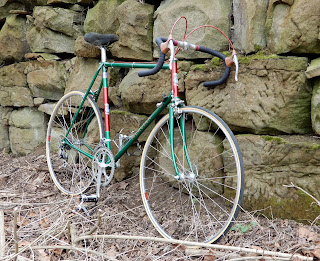 All assembled, the bike weighs around 20 lbs - not bad for a steel bike with a 60cm frame. In a post on 753 tubing, I pointed out that Reynolds offered the tubing in a couple of different gauges. The very thinnest gauge was generally reserved for smaller frames, below about 58cm, while larger frames would have tube walls that were not quite as extremely thin. Though there could be exceptions to that distinction, Mercian was (still is) a pretty conservative builder, and this one for sure uses the slightly thicker gauge. How can we tell? It takes a 26.8mm seatpost. Smaller frames, or any using the thinner gauge would take a 27.0mm post.

I still have to glue on tires before I can take it for a ride. When that happens, I'll put out a ride report.
Posted by Brooks at 7:53 AM