It's hard to imagine anything being more "retro" than friction shift levers. So how perfect that there are even friction levers called "Retrofriction"?

The Simplex company from France introduced their "Retrofriction" shift levers in the early 70s, and they quickly became a favorite among racers and tourists alike. The levers were sold for over 20 years, through several different generations, and under at least four different brand names (Simplex, Spidel, Gipiemme, and Mavic). There were bar-end versions, as well as clamp-on and brazed-on down-tube versions. What made the Simplex levers such a standout was the spring-clutch mechanism that held the levers (and the derailleur!) in place without slipping, but also allowed for a much lighter touch than other levers that were held in place purely with the friction of their bushings and a lot of bolt tension.

Many racers who had full-Campagnolo gruppos could be seen with the Simplex levers mounted on their bikes, and this included a lot of pros at the time, too. As much as racers in the 70s and early 80s may have preferred or coveted Campagnolo's derailleurs, brakes, cranks, hubs, and more, the Campy shift levers were nothing to brag about. Held in place with a 5mm d-ring screw and a nylon bushing, the Campy levers needed 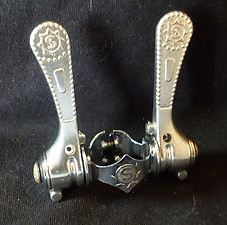 to be screwed seriously tightly to keep from slipping. If they were tight enough to stay put, they were a bear to move smoothly. If they could be moved smoothly, then they'd move on their own as the derailleur would pull itself down to smaller cogs -- usually as the rider was just starting a long climb. Installing the Simplex levers on an otherwise all-Campy bike build was a sign that the builder knew what he was doing.


Versions of the Simplex levers from the 70s, in the first couple of generations, are pretty easy to identify as they have an "S" in a sunburst logo imprinted on them. Most are aluminum, but there was even a plastic version to go along with Simplex's plastic "delrin" derailleurs. By roughly 1980 or so, the levers took on a smoother appearance with a large cutout in them -- this is the version that I probably see the most often and is the style that I have. The version made for Gipiemme is a little harder to find than the others. It has almost a spoon-like appearance that I assume would have a nice feel to it. I've even seen them referred to as "coke spoons," but I won't go there. All of them come up from
time to time on eBay, and prices seem to vary. I checked eBay prices as I was writing this and found them listed between $90 - $125. Bargains can be had, as I've sometimes seen (and bought) clean used examples for far less.

The Simplex levers, along with other friction systems, eventually got pushed out of the market by Shimano's indexing system. The hype at the time (forgive the cliche) was "if it don't click, it don't sell." Nevertheless, I understand that Mavic still offered a variant in the early 90s, but the Simplex company went out of business by about 1995. Too bad, really. A commenter on one of my other posts pointed out that the French were probably the original Retrogrouches. There's probably some truth to that. I've heard it said, and I have no doubt, that the French component makers likely saw indexed shifting as a fad that wouldn't catch on. If they were making any effort to make their own version, they kept it a pretty good secret. Campagnolo's first effort at marketing an indexed system failed miserably, and if not for the racers' loyalty to their other road racing components, who knows what might have happened to them?

The Simplex Retrofriction levers, under their various names and guises, are widely considered the best friction levers. The amount of control at the rider's fingertips is, in my opinion, better than with indexed and integrated shifters. Unlike the various click-to-shift systems that are supposed to be superior, cable tension and adjustment are no issue at all with a friction system, unless the derailleur cable is just so slack that you'd run out of lever travel before hitting the last cogs. Trimming the front derailleur for rear shifts is a simple matter and one has almost infinite fine-tuning ability. Those last couple of points are supposed to be some of the great benefits of the new electronic shifting systems, yet those have always been benefits of full friction shifting.

Is there a down side? Fast and precise shifting is a matter of user skill, but I don't really accept that as a downside. Lots of things require skill and practice, and we usually respect that, so why should being really skilled on a bike be different? Here's one: They don't work so well with 9, 10, or 11 speed cog systems. With most of the older friction levers (the Simplex Retrofriction included), lever travel even to hit 8 cogs gets a little long, and beyond that, the spacing between cogs starts getting pretty painstaking. Okay - got me there, but then that's another issue and another can of worms.