This is a bike blog -- and I don't really want to digress into politics in it. But right now, politics and my favorite pastime have inadvertently collided. Due to the government shutdown, the Ohio & Erie Canal Towpath Trail, part of which traverses the Cuyahoga Valley National Park, has been closed. 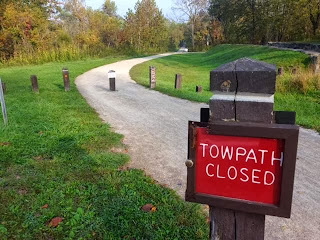 Although I primarily consider myself a "road" cyclist, I enjoy riding the towpath a lot, especially when I ride with my kids. It's a great route, relatively flat, with fantastic scenery, and nicely maintained for riding, jogging, or walking. As the name implies, the Towpath Trail follows the route of the old Ohio & Erie Canal, which once carried goods and materials from the heart of Ohio to markets in Akron and Cleveland. It attracts cyclists from all over the state, and the CVNP is kind of a cycling mecca for both trail and road riders.

Due to the shutdown, the park service is operating with minimal staff, and apparently some are even working without pay. That in itself is a shame. Some people are ignoring the signs and riding the path anyhow, but if they are caught (and the Rangers who are still working ARE patrolling when they can) there are fines to pay. 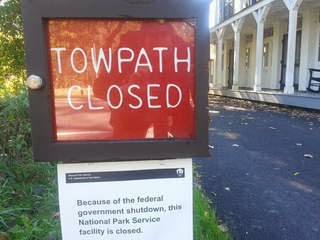 But beyond the immediately obvious effects of the shutdown, with so-called "non-essential" government employees either being furloughed or having to work without pay, there is also a lot of "collateral damage." Many people who don't work for the federal government at all are still being affected. Case in point, my favorite local bike shop.

Century Cycles, in Peninsula, is located right beside the Cuyahoga River and the Towpath -- and pretty much right in the middle of the national park. Considering how many people converge on the park to ride, a better location for a bike shop could not be possible. In addition to the usual sales and service, Century Cycles also does a lot of business in renting bikes to people who come to ride the Towpath. On a normal weekend this time of year, the shop's parking lot is overflowing, and the tiny shop floor is packed with customers who are drawn in for their riding needs while they're visiting the park, or to rent a bike, or even just to visit with the shop's amiable and knowledgeable staff.

Today, I took my kids out for a ride. There are parts of the Towpath that are outside of the national park's control, so we kept ourselves legal and stayed off the closed portion. I'm all for small acts of harmless rebellion, but getting pulled over by an overworked and stressed Ranger (who may even be working without pay) and getting fined in front of my two young kids isn't high on my list of "things to do." Afterwards, we drove over to the bike shop to pick up a couple things I needed, and the shop was practically deserted. I was told that it's been like that pretty much since the shutdown began. While I'm sure that the shutdown will eventually get settled, and the shop will be OK, I wonder how many other businesses are similarly affected, and how many of them might not be OK? How many employees at the bike shop, or other businesses will see their hours cut, or worse, if this thing drags on?

One of the 24-hour news networks has been trying to downplay the effects of the shutdown by calling it a "slim down." I saw a news report where people proudly calling themselves "tea partiers" were praising the shutdown, saying basically that if all these workers are "non-essential," then why do they even have jobs in the first place? How incredibly short-sighted. I've heard people say, or seen thoughtless posts on Facebook, that the shutdown doesn't matter -- apparently because they themselves don't feel the effects.

I'm trying not to get too political in this post (hard for me, because I'm as opinionated on politics as I am on bicycles), but I think it's pretty clear what's happening. Regardless of the rhetoric or whatever reasons these politicians have for digging in their heels, our whole country and our economy are being held hostage over political dogma. It really is no wonder that Congress's approval rating is now in single digits. I just hope that they can get their act together before they do too much collateral damage that can't be reversed.
Posted by Brooks at 9:33 PM