One of my cycling friends recently got a new mountain bike. Carbon fiber wunderbike with one of the latest press-fit bottom bracket systems. Don't even ask what type of press-fit BB, because I don't think he knows, and I don't think I could tell the difference. Thing is, the bottom bracket creaks, and the shop mechanics seem unable to make the creaking go away. After asking around and doing a bit of reading on the subject, I'm finding that creaking is apparently the only thing that is actually "standard" about bottom brackets today.

It wasn't that long ago that there was a handful of national standards for bottom brackets, and though some would probably want to make it sound as if that was terribly confusing and problematic, in practice it was pretty easy to deal with. The most common was British/ISO. Most quality lightweight bicycles with threaded bottom brackets used it. Most Italian bikes used the Italian threading standard. There were also French and Swiss threading standards, and a couple of oddballs -- Raleigh, for instance, was a big enough company at its peak to have its own unique standard. Swiss was always rare, and both it and French threading disappeared by the 1980s along with the others, as most companies regardless of nationality adopted British/ISO. Only Italian bikes continued as a holdout, keeping Italian threading alive. But even when the various standards were in use (or when working on vintage bikes today) it wasn't hard to figure out what one was dealing with -- often just knowing when and where the bike was made was a huge clue. Taking a few simple measurements and looking closely at whether the threading was left- or right-handed generally confirmed it.

So, for the last 20 - 30 years, it seems bikes had finally arrived at one international standard (with just one nation holding out) for bottom brackets.

Today, it seems that there is a new bottom bracket standard every year. Try and keep them all straight. BB30; PF24; PF30; BB90; BB95; PF86; PF92; BBRight; and BB386. I may have left out a couple, and some of them may have different names depending on who makes them. What most of them have in common is that they have some type of press-fit bearings and require various adapter kits to make them work with different brands and types of cranks and axles. Some of them were created by frame or bike manufacturers, while others were devised by the component manufacturers. They all claim to be vast improvements over one another or over threaded bottom brackets.

What is the advantage to one of these new press-fit systems? As a rider/consumer, I don't believe there is one. Really. The manufacturers will claim the benefit is lower weight and greater stiffness, and people love to hear that, but the difference in weight is negligible -- anyone who can tell the difference in weight would also have to be able to feel the difference of a couple sips of water from their water bottle. As far as stiffness -- just how stiff does a bottom bracket have to be? Once the industry shifted away from square taper bottom brackets, it seems to me they got as stiff as anybody can possibly need. Again, the difference in stiffness between one of these new press-fit systems and an ISO threaded BB is just not something people are sensitive enough to feel.

So then what is the REAL advantage? Like a lot of bicycling "innovations" and "improvements" made in recent years, the advantage is mostly to the manufacturer, especially those working in carbon fiber. By switching to some type of press-fit BB, they can eliminate the metal sleeve in the bottom bracket shell, eliminate the need to have it perfectly aligned and machined to the right tolerances, and eliminate the need to cut threads into it. Lennard Zinn, who in my observation seems to embrace a lot of new technology (or so it appears to me when I read his articles in VeloNews), had this to say in Velo Magazine's 2012 Buyers Guide: "The whole idea of press-fit bottom brackets, after all, is to fit into frames that are not made to exact tolerances so that they can be simply molded with cheap labor and not machined afterward. Now you see the problem."

The DISadvantages to the consumer are plenty. Changing or replacing components, particularly cranks and bearings, becomes more complicated as installing the proper adapter becomes necessary. The design and quality of those adapters varies by manufacturer, and getting them to fit properly into the frame, and the crank and bearing assemblies to fit properly into the adapter are also issues. Poor fit is not uncommon, and creaking is the usual result. I have yet to talk to a mechanic who hasn't had issues with them. Again, Lennard Zinn: "With the upside of increased frame stiffness claims, that are largely correct, comes a mechanic's nightmare. . . Complaints about creaking or dislodged bearings are common after a frame is replaced with one that has a different BB shell standard than the original. . . but many times the adapters creak or work their way out of the frame. The solution to this creaking? In many cases, frame or crank manufacturers suggest using Loctite. Clearly this is a flaw in the design of the system if that's the fix."

The blogger and bicycle mechanic RogueMechanic doesn't pull punches when it comes to flawed or problematic bikes and components. He has stoked the ire of many in the bicycle world by blogging about engineering problems, poor construction, or flawed manufacturing -- problems that some out there would rather not hear about. Seriously -- the guy gets hate mail. He did some work for me on a completely different bottom bracket issue (or non-issue, depending on whom you listen to) with a Campagnolo UltraTorque crank system (that could be another whole post, believe me -- if you google "Campy Ultra Torque Problems" you'll find a lot of info on it, much of it from RogueMechanic). I'll never forget what he told me when he returned my repaired bike -- if you've got a bike with a threaded bottom bracket, "hold on to it" he said. Despite the problem with the UltraTorque, ultimately he was able to come up with a solid solution to it and it's been working beautifully ever since. Keep in mind, the UltraTorque crank system is designed for an ISO threaded bottom bracket. Problems he has seen with some of the press-fit systems are much more difficult to solve. Check out one of his articles about the BBRight system (Cervelo BBRight Problem and Solution). 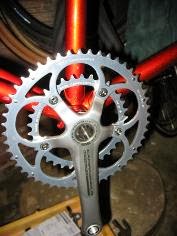 Why haven't the various manufacturers simply adopted one new standard? Competition is one reason, I suppose. One frame/bike company comes up with a new standard and releases to the public. But a competing company isn't likely to want to adopt it and seem to be supporting their competitor. Also, each new system supposedly addresses the perceived problems or weaknesses of the other systems, trying to out-do one another -- though not without having other weaknesses themselves. And with so many competing "standards" (that word is rapidly losing meaning) the only solution for any kind of compatibility is the use of adapters which lead to fit issues and creaking.

It's possible that at some point, the "market" will narrow down the choices. Maybe if we're lucky the manufacturers will stop coming up with new systems long enough for that to happen, and one system will emerge as the winner. It might not even be the best in every way, but it will at least be an actual "standard" in the true meaning of the word, then companies can actually make compatible parts that properly fit together. I can't help but think back to VHS and Beta home video systems. Anyone still have a Beta machine out there? If that's too far back to remember, how about BlueRay vs. HD-DVD? For a while, those two duked it out in the high-def video disc market, but eventually BlueRay won out. We can only hope the same thing happens here.

Addendum: So what is a person with a vintage frame to do if they need a new bottom bracket and they have one of the old, now-defunct threaded frames? Velo-Orange offers their sealed cartridge bearing bottom brackets in French threading, which is one of the more common of the obsolete standards. They also have an internally-expanding "threadless" bottom bracket that they claim works well in frames with damaged threading, and should also will work in some older Raleighs and frames with Swiss threading, but I've never tried or tested them. Phil Wood bottom brackets, which are about as good as one can find, are available for French, Swiss, and some older Raleighs and even Chater Lea threading which is yet another old oddball. Lastly, there's always eBay.