Back in June when I was doing some research for an article on the wonderful Nivex rear derailleur (see HERE) I found some pictures of the special Nivex dropouts with an integrated chain holder. The way they were designed, a rider could shift the chain from the smallest sprocket to the chain holder, thereby allowing them to remove the rear wheel without touching the chain.

My first thought on seeing the Nivex chain holder was "Wow -- that's just like the Campagnolo Portacatena. I wonder if that's where Campagnolo got the idea?" The evidence seemed to support it. In my research, I had found that it is a generally accepted fact that Tullio Campagnolo saw the Nivex derailleur and the dropouts at the 1949 Salon du Cycle show in Paris, and was impressed enough that he purchased a set. Within a few months, he introduced the first prototype of his Gran Sport parallelogram derailleur which must have been inspired at least in part by the Nivex. Although the Portacatena wasn't introduced until about 28 years later, it seemed not only possible, but highly likely that the idea came from the Nivex chain holder.

Soon after I posted that article, I got my Summer 2014 issue of Jan Heine's Bicycle Quarterly magazine (Vol. 12 No. 4), and wouldn't you know, but there was an extensive article on Tullio Campagnolo: The Visionary Behind the Legend. The article re-examined the myths and legends that surround Mr. Campagnolo and the company that bears his name. And sure enough, short of having Tullio himself rise from his grave and say "yes, that's true," Heine's article lent more credence to what I'd been thinking. As far as giving an explanation as to why Campy waited until 1977 to introduce the chain holder, Heine could only speculate. "Did somebody at Campagnolo find the old Nivex dropouts in a drawer, and think that this could be a good idea?" Nobody knows for sure.

Regardless of who actually came up with the original idea, the Portacatena (literally, "chain-holder") was a neat little item whose time never came.

The Portacatena consisted of a "C-shaped" aluminum piece (the actual holder) which mounted onto Campagnolo's 1010/B dropouts using two small tapped holes (another version was available that fit into the axle slot of the dropout, for use with bikes that didn't come with the drilled mounting holes). At the control end, the normal shift lever was replaced with a special shift lever that had an extra release button and a 2-position lever stop. When the rider shifted down to the smallest cog, the release button engaged the first stop position and the lever would go no further. When one wanted to shift onto the chain holder, they would press the release button and move the lever to the second stop position which shifted the chain onto the holder. Look, ma' - no greasy hands!

In reading other people's recollections of the Campy Portacatena, I found several references to an interesting benefit that some racers discovered in using it that had nothing to do with wheel removal. When on a long descent, some would reportedly shift onto the chain holder, bypassing the freewheel, and descend swiftly and silently. Sounds like a cool trick, as long as they remembered to shift back on the gears before they had to start pedaling again.

So, why didn't the Portacatena catch on? Most likely, it was because in most cases the chain holder essentially took the space of one freewheel cog. In other words, if the frame and hub were spaced for a 6-speed cluster (typically 126 mm), one would normally have to use a 5-speed freewheel in order to use the Portacatena -- though I imagine one could maybe get away with an Ultra 6 (narrow-spaced) freewheel. I'm sure 7 speeds (or more) would be out of the question. At a time when the industry was adding (and consumers apparently demanding) more and more cogs, Campagnolo was essentially asking riders to go the other direction. Many riders who even knew of the existence of the chain holder probably didn't think it was worthwhile.

As regular readers might guess, I have a Portacatena set, still in the original packaging. I only just opened it today so I could put the instruction pamphlet onto my scanner (see below). I've had it for years now -- purchased mainly as in interesting curiosity, thinking I might install it on a bike some day if the right bike presented itself. So far, it simply remains an interesting curiosity. I thought about putting it on my Masi, which has the right dropouts, but I've never gotten around to it.

Here are scans of the instruction pamphlet: 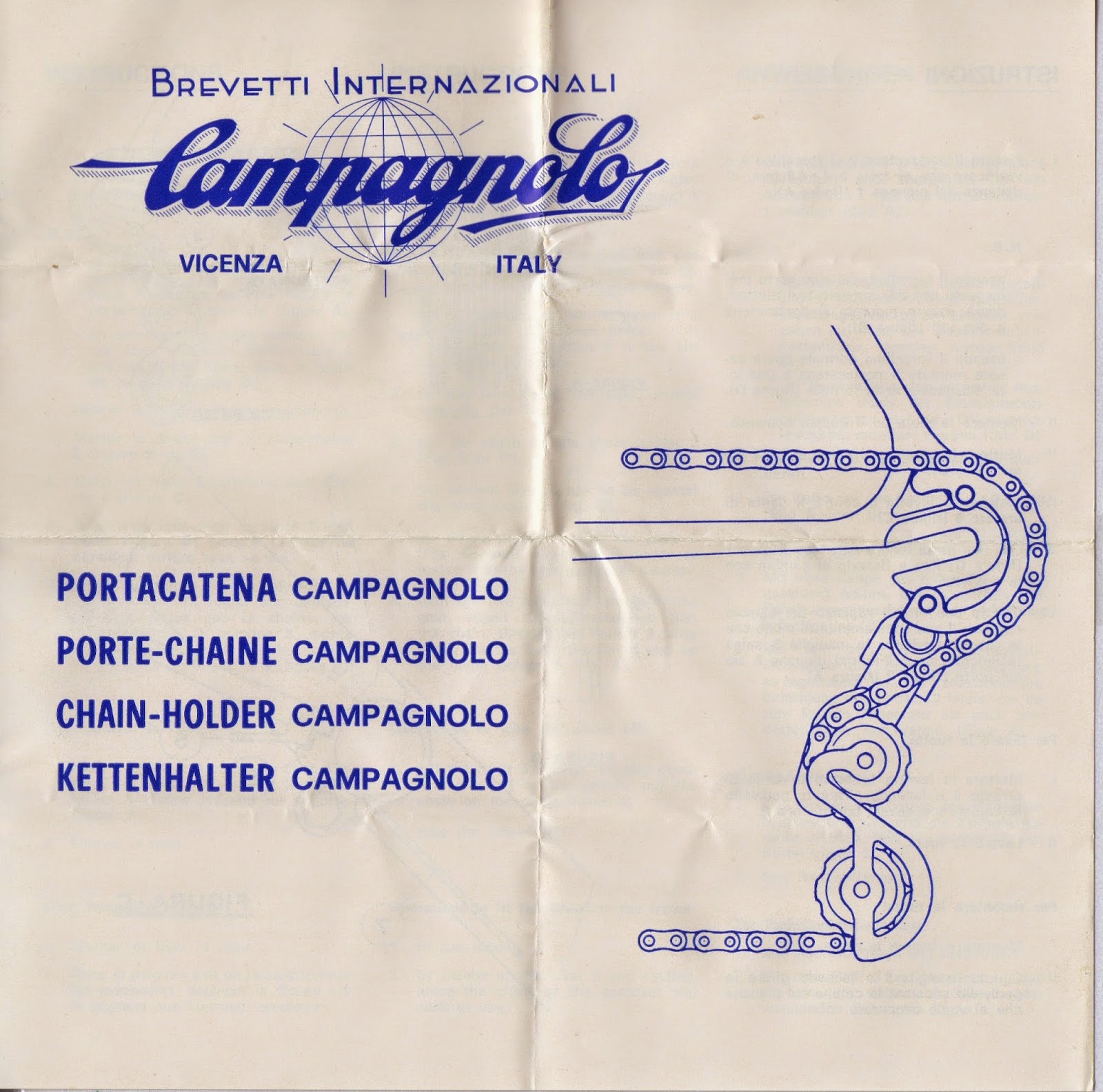 I have seen the devices used with 6-speed freewheels -- as mentioned, it seems that an Ultra-6 would probably work, as it is supposed to fit into the space of a 5-speed. To use a normal-spaced 6, I suppose one could re-space the hub to gain more room on the drive side, but that would also increase wheel dish and increase the possibility of a bent axle. There's one pictured on Classic Lightweights UK that may have been done this way. The description in the picture there says it uses a 6-speed freewheel with 7-speed axle and frame spacing. But unless I'm mistaken, both 6 and 7-speed systems used the same 126 mm frame and axle spacing, so I'm guessing the wheel in that case has some extra dish.

The Portacatena was quietly dropped from the Campy catalogs some time in the early 80s (I couldn't find it in the '84 catalog), though according to framebuilder and blogger Dave Moulton, Campagnolo continued making the dropouts with the mounting holes well into the 90s (see HERE) -- either that, or they made a ton of them in the early 80s and it took years to get through the stock. Since the introduction of the Portacatena in 1977, we've seen the industry go from 6 to 7, then 8, and eventually all the way up to 11 speeds. The real estate between a bicycle's dropouts has become pretty crowded these days, so I don't imagine anyone bringing back this nifty little item. But for retrogrouches and vintage bike lovers, it can be cool piece of useful nostalgia.
Posted by Brooks at 10:58 AM