That artisan creator of some of the most beautiful hubs available today, Curtis Odom, has been at the drawing board working on a brand-new hubset that bridges classic and modern elements in a light, strong, beautiful, and serviceable package: at least temporarily known as the E13 Hubs. Though still in the design and computer rendering phase and not yet in production, the hubs look like they would look at home on just about any bike, old or new. Curtis was kind enough to share a sneak peek at what he's working on. 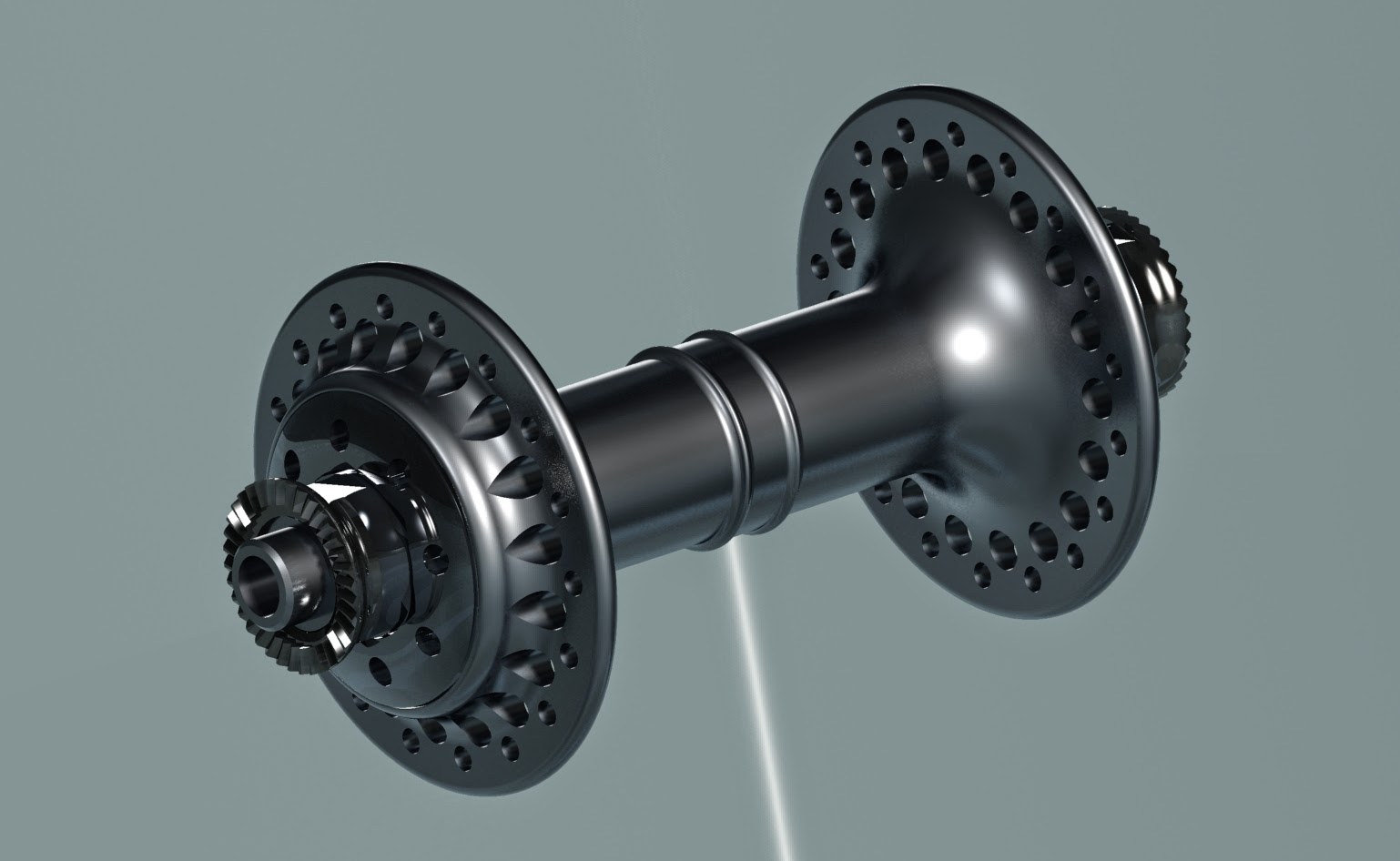 "The point of this hub is to bridge the gap to the rest of the cycling world, or at least more of it, but still retain some nice styling," Curtis told me. He added that the hubs would be a little lighter than some of his more retro-inspired hubs -- a "reasonable weight, but not ultra-weight weenie," he said.

From a technical standpoint, the bearings will really set these hubs apart from a lot of what's available currently. Curtis has designed these hubs around an "E-series" bearing, also known as "Magneto" bearings because of their use in Lucas racing magnetos on vintage racing motorcycles and cars. "It just so happens to be the same type of bearing used by Maxi-Car on their famous hubs," Odom said. Maxi-Car hubs, highly prized by cyclotourists for their smoothness and durability, used E9 and E10 bearings for their front and rear hubs, respectively. Those same E9 and E10 bearings have also been available as on option on Curtis Odom's current hub models. For clarification, the number represents the size in millimeters of the inside diameter of the bearing.

But for these hubs, Odom has upped the size to 13 mm (E13) to increase durability. They will also have oversize aluminum axles to help save weight. Curtis describes the magneto bearings as an open angular contact bearing -- "a proper bearing for bicycle hubs!" he added. But another element is that the bearings are completely user-serviceable. Yes, that means occasional cleaning and re-greasing -- but it also bodes well for long life. From my retrogrouch-y perspective, I'll always choose serviceability over so-called "maintenance free."

Another well-thought out detail in the hubs is the thread-in dust caps. It's another element inspired by the classic Maxi-Cars -- but improved with a somewhat familiar "twist." The dust caps will have a reverse spiral machined into them that is designed to clear contaminates and water from the hub. Familiar? Yes, it's a trick borrowed from old Campagnolo bottom bracket cups. Curtis says he is also exploring some other types of non-contact seals to improve the life and performance of the new hubs.


Curtis is currently working on a couple versions of the hub, with some other variations possible. A light version for more "sporting" applications would be equipped with aluminum axles, semi low flanges, and an aluminum cassette body. A "rando" version would have steel axles, semi high flanges, and a titanium or steel cassette body. Solid "track nut" type axles might be a possible option for seriously heavy duty use. Curtis is considering other options, such as a disc-brake version if the demand is there. It is also likely that a track hub set would be built around the E13 bearings, which he says are ideal for the track. Would there be a version for thread-on freewheels? No plans for that at this time, as Odom gets so few orders for freewheel-type hubs as it is. Someone looking for hubs for a truly vintage bike might be more interested in some of the more traditional-styled Curtis Odom designs, anyhow. 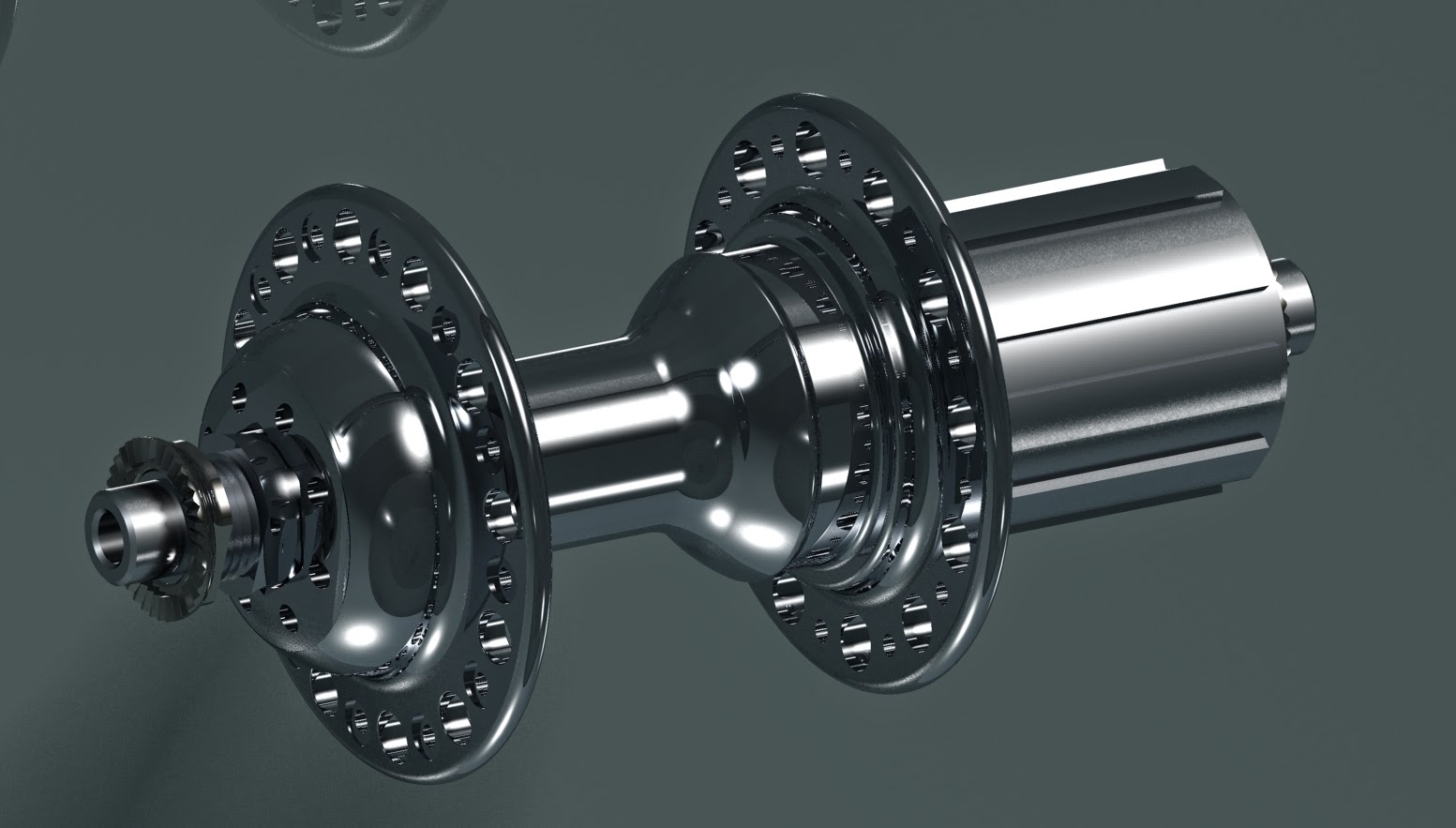 For the time being, the hubs are un-named. Referring to them as the E13 is something of a "working title." Given that some of the inspiration seems to come from the classic Maxi-Car hubs, I think a name that somehow recalls that bit of design DNA might be appropriate. Any ideas on that?

There isn't info about the new hubs posted to the Curtis Odom website as of this writing, and some elements of the design may still change a bit before they become reality. Curtis says, "I am not to the point of making chips from bars of aluminum yet, but close." For someone looking for some great hubs that bridge the past and the present in a long-wearing, durable, and serviceable package, it may be worth keeping an eye out for these.

Thanks for the preview, Curtis!
Posted by Brooks at 12:15 PM