So I was in the process of putting together a Retro-grouchy article on Walmart Fat Bikes when, taking a break to see what else is going on in the cycling blogosphere, I checked out today's BikeSnobNYC. Of course, BikeSnob is ripping Walmart Fat Bikes, and probably better than I would. Being routinely "scooped" by Froot-Loops-eating full-time bloggers with helper-monkeys and interns is one of the hazards of being only a part-time blogger who spends the rest of his time teaching high school English students to hate Beowulf and Macbeth a little less, while competing with their cell phones for their limited attention.

Since most Retrogrouch readers probably stop off at BSNYC before coming here, you've probably already seen it. If not, it's HERE. 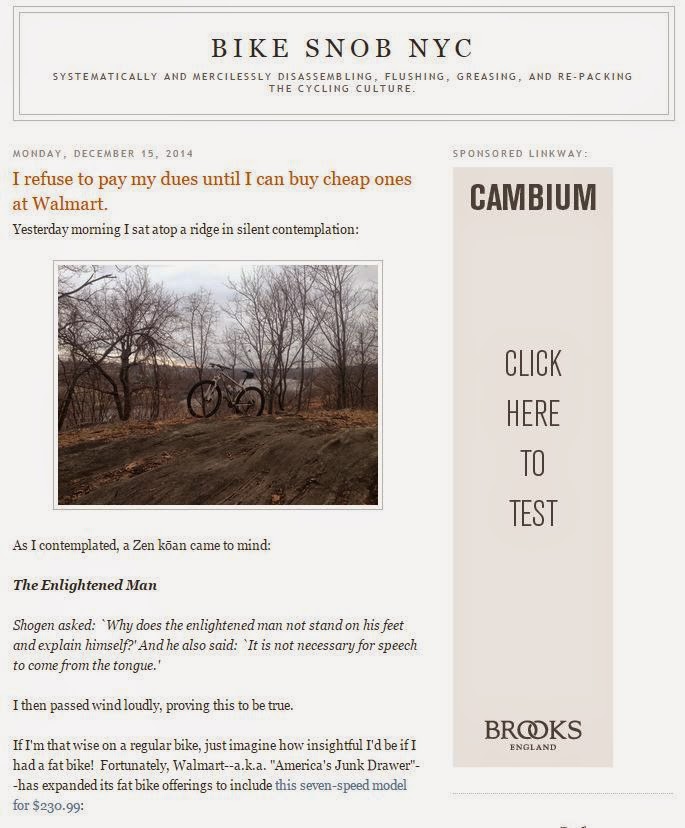 and the fat bike in question: 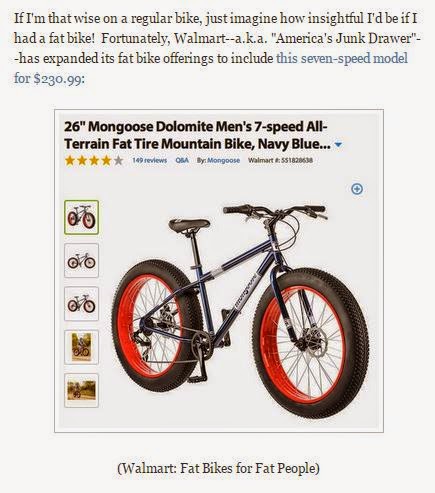 Kinda takes away what little thunder my words were likely to have, but I had already begun, so with a half-hearted sigh, allow me to continue.

In one of my communications classes recently, I was talking about slang expressions, catch phrases, etc., and how these things, like any fashion or trend, have a finite life cycle. As popular as any catch phrase might be, I told them, at some point that phrase will fade away, never to be heard again except possibly in some ironic context, or perhaps a parody. Remember these? "Don't have a cow, man!" "Where's the beef?" or "Whazzzuuup?" One thing I mentioned as a pretty good gauge of an expression's life span is to note when it finds its way onto a T-shirt at Walmart or any other cheap department store. Once you start seeing the trendy catchphrase on T-shirts, that's a pretty good sign that the thing has peaked and is on its way down (this coming from a guy who once owned a "Frankie Say RELAX" T-shirt). In no time at all, the T-shirts will be in the bargain bin at Goodwill, and using the expression will mark someone as hopelessly out of touch.

I think a similar measuring stick can be used with the fat bike trend. It seems like every brand out there now offers a fat bike. And the marketing cry of "You Need a Fat Bike!" is practically unavoidable now -- just like we need a gravel bike, and a cyclocross bike, and an urban fixie, a 29er, and a 27.5. Unfortunately, I don't really think I need a fat bike. People tell me "But you can ride on the beach! And over the snow!" Yeah. But I've never looked at a beach and thought to myself, "all I need now is a bike that I can ride over all this sand." And snow? Meh. I'm not saying it wouldn't be fun once in a long while -- but I've managed pretty well so far without one. Even here in Northeast Ohio, I think the real usefulness of the thing is pretty limited.

Nevertheless, the trend -- the fad -- continues. But now that they're available at Walmart, with a 7-speed model for about $230, I think it's a pretty good sign that the fad has peaked. It's all downhill from here.

As another sign that some people out there have entirely too much money to spend is the fact that they now have fat bikes for kids. A 20" version is available from Walmart for $190. Specialized sells another version for about $1000. Give a Walmart fat bike to a kid and turn him (or her) off of cycling for good. That's just what a little beginner needs is a heavy, slow, slug of a bike to sap all the fun out of a ride. And $1000 for a kid's bike? Is Specialized (or their buyers) aware that most kids outgrow bikes before they even wear the little molding nubs off the tires? Seriously. Finding virtually unridden kids bikes on the used market is a breeze because kids outgrow their bikes so quickly. So a $1000 fat bike for a kid is sure to be money well spent.

Anyhow (despite the fact that my heart's not really in this post anymore), the way I see it, it's just another must-have trend designed to get existing bike owners to buy another bike, but now that the things are at Walmart, it might be a sign that fat bikes have "jumped the shark." Before long, riding one might be the bicycle equivalent of wearing that "Frankie Say RELAX" T-shirt.
Posted by Brooks at 7:51 PM