A great pair of gloves is a wonderful thing. And nowadays, a pretty rare one.

Have you bought a pair of cycling gloves in the last few years? I'm sure you have. Chances are, the manufacturer touted the gloves' "anatomic" gel padding -- designed to "relieve pressure on the Median and Ulnar nerves" in your hand -- and practically guaranteed to give "superior riding comfort" for mile after mile.

I don't know about you, but the more "anatomic" the padding in gloves gets, the more it makes my hands hurt. It might seem counterintuitive, and probably counterproductive. As much as the makers try to say that putting strategically located little bumps of gel padding into the palm of their gloves is supposed to relieve pressure on key nerves, it seems to me that the anatomic pads only end up creating more localized pressure on adjacent areas -- and more discomfort.

The classic leather and cotton cycling gloves a lot of us remember from the past were typically a pretty simple affair. The padding was usually just an extra layer of leather across the palm, with a bit of simple flat padding stitched between the layers. But even with that, depending on the specific design, and where the padding hit, or where the seams hit, the padding could still lead to some discomfort. Maybe it would bunch up in the wrong places when you'd grip the bars. Maybe they just created too much of a "handful" when holding onto the bars.

In any case, it's hard to find a pair of good gloves today that I like as well as the best gloves of the past.

I recently got a pair of the new "Thinny Riding Gloves" from Rivendell that are well-made, rival the gloves a lot of us remember fondly, and do without the padding altogether.

According to Rivendell: "It's a hand physiological fact -- you can look it up -- that relying on gloves to protect hand nerves is just as effective as putting on false eyelashes to keep your cheeks dry when it's raining." There's probably something to that. I've long been thinking that maybe the ideal glove would have an extra layer of leather on the palm, but with no padding in-between. Well, these don't have that extra layer of leather, but they do dispense with the padding.


Made of goatskin (there's also a "fake leather" version for vegans), the gloves are soft to the touch, but should prove to be pretty tough. I've had a few opportunities to try mine and have been pleased so far. The leather offers good grip and nice feel on the bars. My rides with the gloves have lasted about an hour or so, and I have not found myself to be missing the padding at all. In fact, compared to the so-called "anatomic" padded gloves that are so pervasive now, I found these to have a much more natural feeling.

Regarding fit -- it can be so hard to buy gloves when you can't try them on first, and of course what works for one person might not work for someone else. As far as all this goes, understand that I'm describing how the fit works for me, and your own mileage may vary. Rivendell suggested going up a size from what one might ordinarily wear. That might be easier to figure out for some than for others. In my case, I typically come in somewhere between Medium and Large. With some gloves, or some brands, I need Medium. With others, I've needed to go with Large. So it seemed to me that I had to decide between Large and X-Large. Ultimately, I went with the XL, as Riv seemed to be suggesting that when in doubt, go up, and I didn't want to struggle with getting the gloves off after a ride. 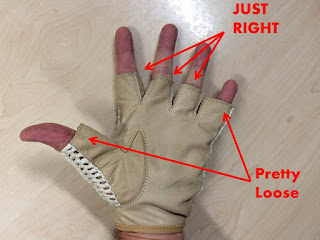 In my particular case, the gloves seem to fit pretty well all around the palm. In the fingers, it's mixed. Around my index, middle, and ring fingers, the fit is good -- close, without being too snug. On the other hand (just an expression in this case), the fit around my thumb and smallest finger is pretty loose. Remember that fit issues like that will affect everyone differently.

So, should I have gone with the Large instead of the XL? I'm thinking probably not. I have a feeling that, assuming the fit from one pair of gloves to the next were consistent, the parts that are loose on this pair of gloves would still be loose (maybe only a little less so) on the next size down, but the fit around the other fingers might be more snug, making the gloves tougher to take off. Anyhow, in actual riding, the loose fit around the thumb hasn't been very noticeable. If I start to notice it or it becomes a bother, I suppose I might be able to make some minor alterations with some heavy duty twine and some creative needlework on the crochet back. We'll see.

Over the years, I've been trying out other classic-styled leather and crochet-back gloves without a lot of luck. One area that sometimes causes a problem for me is the seam between the thumb and the forefinger. If not done right, I've found that the seam can cause some chafing in that fairly tender area. On these Rivendell gloves, I'm not noticing that to be a problem at all. On the inside of the gloves, the seam lays very flat. Not only that, but it almost looks as though the edge of the leather is thinned, or chamfered so it has a smooth transition (it looks that way, but I can't tell for sure if that's actually the case). Lastly, maybe it has something to do with the softness of the goatskin as opposed to tanned cowhide. Whatever the reason, so far I've felt no discomfort from seams on these gloves, which is a welcome thing. 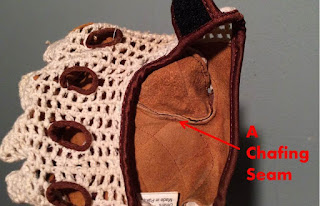 I've only had the gloves for a short time, so it's impossible to know how they'll hold up after lots of miles. Still, looking them over closely, I don't see any potential issues in the construction. As somebody who has been known to rub broken glass off a moving tire with a gloved hand, having a second layer of leather might be a nice thing - but maybe that is a practice that I could consider halting.

Now that the temperatures are dropping, my opportunities to wear fingerless gloves are diminishing, but I'll keep wearing them when I can -- If I find anything that changes my mind about the durability, I'll likely mention it here on the blog.

So, what do the gloves cost? Given the apparent quality of the gloves and the materials, I'd say they are very reasonable at only $15. Shopping around for gloves from a variety of brands and styles, that price puts them about in the middle of the pack - with a range of prices from about $9 - $30. I'd definitely choose these over a pair of "anatomic" gel pad gloves costing twice as much, or even half as much.