Is there anything better than getting a brand new frame to build up -- or maybe (as in this case) a great old frame, just back from the paint shop?


The anticipation is tremendous -- opening up the box, and pulling the meticulously wrapped frame and fork out. Then bit by bit, carefully peeling back the wrapping, to reveal the glossy, freshly painted frame inside.

So, you may be wondering, what is it? 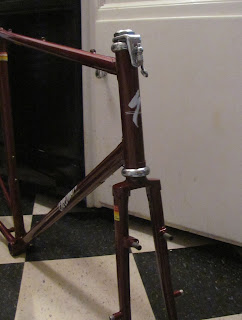 It's a 1984 Specialized Expedition. One of the nicest loaded touring bikes of its time.

These early '80s Expeditions were designed by Tim Neenan, who was Specialized's frame designer at the time. He also designed the sport-touring Sequoia model (another great bike!) and the first Stumpjumper. Neenan is now the man behind Lighthouse Cycles, which today makes updated custom-built versions of both the Expedition and Sequoia. 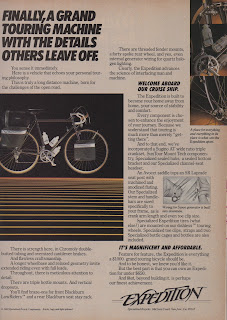 As far as I know, the Expedition was only available in a charcoal gray metallic, which was a really common bike color in the early '80s. People often picture garish neon colors or "Miami Vice" color schemes (like coral pink and turquoise) when they think of the '80s, but the early part of the decade was actually much more subdued than that. My example had some pretty dull and tired paint, worn through in some places, and some surface rust poking through in others. Since I actually plan to get a lot of use out of it, and it is not a particularly rare or collectible bike, I decided a repaint was in order. And in that case I took the liberty to choose a different color. The metallic burgundy is, I believe, a timeless color for any bike -- and with the reproduction decals in place, it's hard to believe that the bike wasn't available in this color originally.

Through posts on one of the bike forums by both Tim Neenan and Specialized's Bryant Bainbridge, I'm surmising that the bike's frame may have been built in Japan by Miyata. That company made frames for Specialized for a year or two, but according to Bainbridge, Miyata wanted more control over the production specifications than the folks at Specialized were willing to relinquish. Frame production was later spread out to other, smaller Japanese builders (I believe Toyo was one of them, which today makes some frames for Rivendell). After the dollar crashed against the Yen in '86 they had to start sourcing bikes from Taiwan. Those were nice bikes, but the workmanship on the Japanese-built frames was second-to-none. 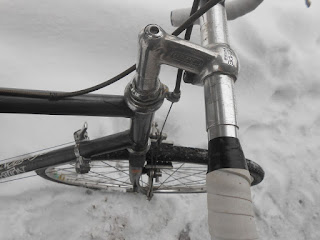 Some parts that had certainly been changed over the years include the derailleurs, shift levers, saddle, and stem. I believe the seat post may also have been changed. It was the same model as originally specified (SR Laprade -- ubiquitous in the '80s), but the tubing dimensions and everything I can find about the Expedition tells me it should take a 26.8 mm post, and the post that the bike came with measures in at 26.4. My suspicion was raised when I loosened the seat lug binder and the seat post slipped right down to the head all on its own. That, and the binder ears appeared to be more "pinched" than what seemed to be prudent. 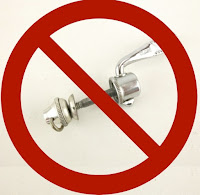 Another thing that was changed - questionably - was that someone installed a mountain-bike style quick-release seat post binder bolt. I say "questionably" because such a bolt is totally inappropriate on this type of bike, and it was a terribly bad fit for the type of seat lug binder ears. Between the ill-fitting bolt and the slightly-too-small post, it's lucky the seat lug wasn't irreparably damaged.

Regular readers know that I've had a number of posts in the last few months about various components that I've been gathering. If you haven't guessed, many of those will be going onto this bike in the next few days. Those include: 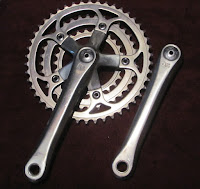 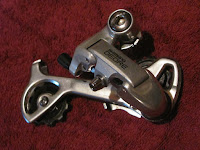 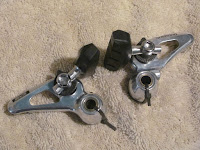 Upcoming posts will take a closer look at more of the components I'll be putting onto the bike, and eventually, pictures of the completed package.