"The sport of cycling is notorious for its culture of cheating—made most famous by the rise and fall of Lance Armstrong and his use of performance-enhancing drugs." 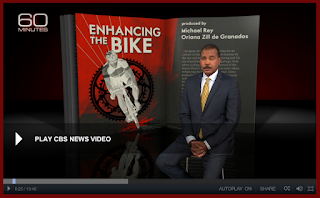 That is the opening of a recent investigation story that aired on CBS's 60 Minutes last week. Wow. As if professional baseball and NFL football are drug free, right? But still, it does seem that pro cycling has ZERO credibility, especially in the eyes of the general public. I've talked about that in this blog plenty of times before, so the revelations aren't new to me, but to have it put that way by "outsiders" is like hearing someone insult a member of your family. I can complain about my own siblings all I want, but if someone else insults them, I'm going to be looking to start a fight.

Anyhow, the segment, which can be seen on CBS's 60 Minutes website (If the embed works, it will appear at the end of this article) covers some familiar ground about motorized doping. The last time I wrote about "mechanical doping" was last spring, after a joint investigation was released by the Italian sporting newspaper Gazzeta dello Sport and the French television network Stade 2. Anyone who looked at those reports won't find much new in the 60 Minutes segment. 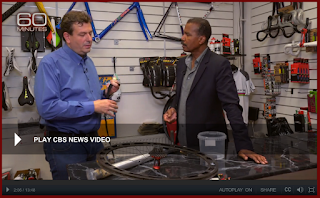 The main source for the 60 Minutes investigation is a now-familiar face: Hungarian engineer Istvan/Stefano Varjas, who has created and sells hidden motors, and claims that they are being used in the professional ranks (but it's not his fault, he adds).

Varjas again shows and demonstrates the small motors that can be installed in a bike's down-tube or seat-tube. And in an extra addendum video, "60 Minutes Overtime," he again claims that his newer technology, electromagnetic wheels, are the latest thing and virtually undetectable. However, just as in the Stade 2 and other stories, he only shows the carbon fiber wheel with little cut-outs for the magnets -- but does not actually demonstrate one in use. In the "Overtime" segment, even the 60 Minutes reporter Bill Whitaker describes Varjas as "complicated" and "cagey." It's difficult when you want some real answers, but all you get is innuendo.
A couple of claims made in the 60 Minutes story that were not in some of the earlier reports are very troubling -- but again, not very well substantiated by actual fact, which is frustrating. Again, it is Varjas who makes the claim that he first developed his hidden motors in 1998. He says that an unnamed party saw an early version of his motor and paid him $2 million U.S. dollars for exclusive rights to use the technology (60 Minutes verified from bank records that he did indeed have that amount in his bank at the time). He couldn't talk about his motors or sell them to anyone else for 10 years. So of course, whose name gets brought up as a possible recipient of the technology? You guessed it, Lance Armstrong, who won his first Tour de France in 1999.

In the absence of actual proof that Armstrong or the U.S. Postal team used hidden motors, The 60 Minutes crew buys a 1999 Trek US Postal Team model off of Craigslist, then has Varjas install one of his early-design motors into it (apparently at a cost of $12,000!).

The stunt is somewhat sensationalistic proof that it could be done - but unfortunately (again), not proof that it actually was done. They do talk to former US Postal member Tyler Hamilton and have him try the bike, but for his part, Hamilton (who has been very forthcoming and, I believe, honest about his own history of doping, and the doping of teammates like Armstrong) says he never knew of any motors being used.

60 Minutes also talks with Greg LeMond - and LeMond is almost certain that pros are using the motors to cheat. LeMond has worked with authorities to find hidden motors, but insists that the UCI isn't doing nearly enough to catch them.

Another troubling insinuation brought to light involves Team Sky. Varjas insists that his special "enhanced" wheels are absolutely being used in the pro peloton (whether the electromagnetic rims - or wheels with a motor hidden in the hub - it wasn't exactly clear to me). Kathy LeMond says that Varjas told them "Weigh the wheels. You'll find it in the wheels. The wheels are in the peloton." The "enhanced" wheels weigh about 800 grams more than normal wheels. 60 Minutes then reports that at the 2015 Tour de France, the time trial bikes of Team Sky consistently weighed 800 grams more than those of other teams.

A spokesman for Team Sky said that the extra weight was due to aerodynamic equipment (though all the teams would be using similar aerodynamic equipment on their time trial bikes, wouldn't they?) and that the team's bikes were checked and cleared by the UCI. However, 60 Minutes says that French investigators were not allowed to remove the wheels and weigh them separately. So again we have questions, but not real answers.

Some observations: First - it is clear that this story was put together by and for people who know very little about bikes or bicycle racing. Everything has sort of a "dumbed down" feel to it (The fact that Whitaker can't stay upright on the bike doesn't help the "outsider" impression). Second, there are lots of allegations made, and a fair amount of innuendo - but no conclusive proof. The segment does make it virtually undeniable that motorized doping is possible, but still doesn't prove that it is happening in the pro ranks. Third - apart from the contributions by Greg LeMond, the segment doesn't reveal much that is new that hasn't been pretty well covered by other sources.

Overall, the 60 Minutes segment is probably worth watching, but a bit frustrating in its lack of hard proof. People who insist that mechanical doping isn't happening will continue to deny it. Those who believe it is likely (as I do) will still be stymied by the inability to prove it.