Some readers might recall last Spring I took part in an early season vintage bike ride in Michigan, dubbed the Steelhead Ride (after the steelhead trout). This past weekend my friend Jim T., who organized the ride last year, had a "sequel" ride of sorts that followed the White Pine trail in Western Michigan - a trail some of the locals call "The Spine." I was happy to have the opportunity to make the trip from Akron to Grand Rapids so I could join in the fun again.

The White Pine Trail is a converted Rail-to-Trail that runs over 90 miles north and south through Western Michigan - from Grand Rapids to Cadillac. Though the majority of the trail is paved, there are sections of it that are dirt and gravel, and a little bit of a challenge on skinny road tires. Riders were encouraged to choose their bikes and tires accordingly. The route was chosen so that we'd get a full metric century - 62 miles - though in the end, most of us finished up with around 64 miles.

Having about a 5-hour drive from Akron to Western Michigan, Jim was kind enough to let me stay at his home for the weekend. The hospitality was excellent. I left right from work on Friday and arrived around 8 pm, where I found his wife, Maureen, had a bowl of spicy chili and a beer waiting for me. That was a great welcome.

Although Thursday and Friday had seen a lot of rain and strong winds, Saturday morning we got up to find ideal riding weather. Whoever had suggested moving the ride from April to the first weekend of May made a good call. We had brilliant sunshine throughout the day, with temperatures starting out around 60 in the morning, and ending up in the high 70s by the afternoon. 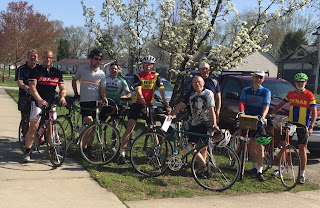 Our group gathered and headed out from Jim's house, which is just a few miles of road riding from the trail. The ride took us through the quaint and picturesque little town of Rockford, which has numerous shops, restaurants, and watering holes. It was a bustling place, and we saw a lot of groups such as wedding parties taking pictures by the riverside and its waterfall. We also passed through a few sleepy little villages, including Howard City where we stopped for lunch.

Unfortunately I didn't get great pictures of all the bikes on the ride (sorry - I hope nobody feels slighted), but here are a few pics that came out pretty good.

I chose to ride my green and white Mercian with the barber pole paint scheme. If there had been any threat of rain, I might have taken my Rivendell because it's equipped with fenders. Given that there would be sections of gravel, I installed the fattest tires I could fit into the Mercian. It turns out that the frame was only built to accommodate 25mm tires, though it can handle 28 without any trouble. I decided even 28mm wasn't going to be enough. On a whim, I took some 32mm Paselas off another bike just to see if they'd fit. They did. I had no more than 1/8 inch on either side of the rear tire between the chainstays, and less than that under the rear brake. I also had no more than 1/8 inch of clearance under the front brake. All in all, had there been mud, it could have been a problem - but with the trail dry under full sunshine, it worked out fine. On the gravel sections I felt great and the tire volume really kept the vibration to a minimum.


The White Pine trail is quite flat for most of its length, but I think Jim knows that I come from an area known for more hills (I've said repeatedly that it isn't a proper ride without a good hill climb) - so I think it was at least partly on my account that he worked at least one solid hill into the ride. In the last few miles of the route, there was a pretty steep road that crossed the trail. Some opted to skip the hill, but about half gave it a shot. We rode down to the bottom, then turned around to take it to the top. I'm guessing it was at least 15% grade in the steeper sections. Made me feel right at home.

We got back to Jim's late that afternoon where a big pot of sloppy joes, potato salad, watermelon, and beer were waiting for us - once again, courtesy of Maureen. It was a great way to end the ride. The gang hung out for a while afterwards with most of the conversation being bike related, with occasional dips into the serious (like solemn rides of silence) and occasionally to the absurd (like unconventional wart removal methods).

Although 5 hours is a long way to drive for a bike ride, it was great to get together with friends and make some new ones. All told, it was an excellent weekend visit. Jim's already giving thought to hosting a ride for next year with another route. If I have a suggestion, it might be to explore some of the (many) dirt and gravel roads that seem to abound in the mitten state.
Posted by Brooks at 12:46 PM