Once again, the Tour de France is happening, and I'm not really giving any more than casual interest in it. The last-minute clearing of Chris Froome from doping charges, while maybe good news (?), doesn't exactly inspire faith in a sport that has become barely more credible than pro wrestling. So in true Retrogrouch tradition, let's go back 40 years and revel a while in a great champion from the past: 1978 - Bernard Hinault.

The greatest racer of his generation (or likely, any generation) Eddy Merckx raced his last Tour de France in 1977, in which he finished in 6th place. Though he had plans to race the Tour in 1978, disappointing results in the early season led Merckx to retire from racing in May. The Era of Merckx was over.

With the retirement of other great riders from the Merckx era, like Raymond Poulidor and Luis Ocaña (both at the end of 1977) the 1978 edition of the TdF seemed wide open. Enter Bernard Hinault, a young professional in his fourth year of racing, entering the Tour for the first time. Other early favorites for the '78 Tour included two Dutch riders, Joop Zoetemelk, riding for Miko-Mercier, and Hennie Kuiper, riding for the powerful TI Raleigh team. Peugeot had Bernard Thévenet to defend his '77 Tour win, though he was not in peak form.

Though only 23, Hinault was quickly making a name for himself as a rising star. In 1977, he burst onto the national consciousness in the Dauphiné Libéré where, attacking on a tricky descent, he overshot a curve and plunged off the edge of a precipice. The next thing anyone knew, Hinault was seen scrambling back up to the road, mounting a new bike, and taking off for victory.

The 1978 Prologue took place in Leiden, Holland, but the weather for the stage was so terrible that most teams and the Tour directors agreed to having the stage not count toward the General Classification - which was a blow to the Raleigh team. Their powerful Classics-loving squad shrugged off the weather and did well on their home turf, and Jan Raas had won the stage. That meant Raas started Stage 1 in the leader's position, but without the Yellow Jersey. It was a small matter, since the Raleigh squad rode with something to prove to put their man officially in Yellow by the end of the first stage.

The team time trial of Stage 4 was another big win for the Raleigh team, and their Klaus-Peter Thaler pulled on the Yellow Jersey. Stage 4 was not a good one for defending champion Thévenet - he crashed, and his Peugeot team lost 13 minutes to the winning Raleigh team.

Stage 6 was one for the sprinters, and it was won by a young Irish rider who, like Hinault, was competing in his first Tour - Sean Kelly. Needless to say, he would go on to win more stages and four Green Jerseys in his career.

The next stage where the GC contenders could really shine was the individual time trial from Saint-Émilion to Sainte-Foy-la-Grande. It was just over 59 km and Hinault charged on to win it decisively and moved himself up to 4th place overall. Defender Thévenet continued to suffer. It's a shame to have to say it, but drugs were a factor in Thévenet's decline - he had basically destroyed his liver taking cortisone and it ruined his career. He'd never again match the performance he had in '77.

Stage 12, on July 12th, was scheduled to be a 2-part, split stage: a 158 km stage from Tarbes to Valence d'Agen, followed by a 96 km stage from Valence d'Agen to Toulouse. These 2-part stages had become a point of contention between the riders and the Tour organizers. Add to that the fact that this was after a couple of long, difficult stages and a long transfer from the end point of Stage 11 to the start of Stage 12 in Tarbes. The riders protested - and were surprisingly led by the young newcomer in the French Tricolore, Bernard Hinault. For stage 12a, the racers rode together at a leisurely pace, then in the final kilometer, dismounted and walked to the finish. Fans were upset, town officials in Valence d'Agen were outraged, and the stage results were nullified. The pictures of a defiant young Hinault are priceless.

Stage 14 was another decisive one - an individual time trial up Puy de Dôme. The stage winner would be hard to predict. Hinault was proving himself a great time-triallist - but Zoetemelk was the better climber. As it turned out, Zoetemelk rode brilliantly, took a fast bike change for a lighter climbing bike for the main part of the climb, and won the stage. He moved up to 2nd overall in the GC. King of the Mountains, Michael Pollentier, took 2nd in the stage. Like Zoetemelk, Hinault also tried to change bikes for the final climb, but overzealous fans crowding the road caused him to crash, damaging his bike. He finished 1'40" after the stage winner.

Stage 16 featured the famous climb up Alpe d'Huez. The main contenders on the final climb were Hinault, Pollentier, Zoetemelk, and Kuiper. Pollentier attacked early and started building a lead, with Hinault and Kuiper chasing to close the gap. Zoetemelk couldn't quite hold their pace and lost a little time. Pollentier won the stage, followed by Kuiper, then Hinault, and then Zoetemelk. In the GC, Pollentier had moved up to 1st overall, with Zoetemelk in 2nd, Hinault in 3rd, and Kuiper 4th.

Then came an unpleasant surprise. After the stage, Pollentier was supposed to report for a urine test. He was quite late getting there. During the test, he apparently had some difficulty producing the required specimen and was acting a little odd. He was then checked over by the suspicious officials who discovered his secret - a little home-made apparatus that was supposed to provide an untainted sample (as I understand it, it consisted of a urine-filled condom and some rubber tubing - literally hidden up his sleeve). It would almost be funny if it weren't so pathetic. He was ejected and given a 2-month suspension. It goes to show (again) that doping is nothing new - but it has definitely gotten more sophisticated.

With Pollentier out, Zoetemelk became the new race leader with Hinault close behind. Kuiper was briefly in third overall, but a crash in Stage 17 put him out with a broken clavicle.

Hinault and Zoetemelk matched one another closely until Stage 20 - the last individual time trial. It was 72 km, from Metz to Nancy, and Hinault was only trailing Zoetemelk by 14 seconds at the start of it. Hinault put his stamp of authority on the race, doing what he did best. He ended up beating Zoetemelk by an astounding 4 minutes, 10 sec., and pulled on the Yellow Jersey for the first time. With just two stages left, he held a commanding lead of 3' 56". Hinault won the Tour with an overall time of 107h 18' 00". 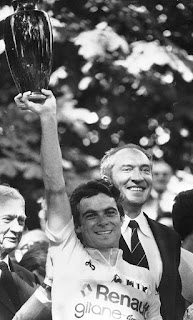 At the end of the Tour, Zoetemelk was 2nd overall - something he accomplished five times in his career (his only TdF win would come in 1980 - the year Hinault would have to abandon the race with tendonitis). Freddie Maertens with the Flandria team won the Points Leader's Green Jersey, while Mariano Martínez of Jobo-Spidel was the King of the Mountains.

Like previous generation-defining racers, Merckx and Anquetil, Hinault had won the Tour de France in his first attempt - and won it convincingly. It goes without saying that he would also join Merckx and Anquetil in the exclusive club of 5-time TdF champions, and as one of the few racers to win all three Grand Tours.

The Era of Hinault - the Badger - had begun. And it happened 40 years ago.