I guess this post is kind of a follow-up to the previous one in which I described removing a stuck bottom bracket from an old Motobecane. That little project got me thinking about threading issues on old bicycles.

Back in the early days of the bicycle industry, in the 19th and early 20th centuries, when it came to any bicycle parts that required screw threading, it was up to various individual manufacturers located in different countries to come up with their own dimensions and threading standards for their own products - which is another way of saying there were no standards. Interchangeability of parts was just a dream.

Early in the 1900s, there was a push to create some unified standards - at least nationwide if not worldwide. For instance, in Britain, the industry came together around something that would eventually become known as BSC (British Standard Cycle) threading and dimensions. Most British companies adopted the BSC standard, though there were exceptions. Raleigh for instance was big enough (and basically made all their own components in-house) that they could and would continue to use their own proprietary threading all the way through the 1980s. Almost all Nottingham-built Raleighs (all those classic 3-speeds, for instance) used their unique threading - although their top end performance-oriented bikes, like the Professional and the International, and the "Team" bikes (all made outside of the massive Nottingham works) were built to the BSC standards. Most higher quality American, Japanese and later Taiwanese-built bikes also would use BSC.

The Italian industry likewise came up with their own standards, as did the French. For the most part, components were not compatible between bikes from different countries, but there were a few exceptions. For instance, on hubs which were threaded for a freewheel, British and Italian were close enough that some people would say they were interchangeable. Same goes for British and Italian headsets. Personally, I would say they were close enough that you could switch them in a pinch - but I wouldn't want to carelessly and repeatedly switch back and forth between the two (for example, from British to Italian, back to British, and back again). Over time, the slight difference could lead to weakened threads on the hub (which are usually aluminum) and a freewheel that eventually breaks loose from the hub while riding -- OUCH.

French headsets are not compatible at all with British or Italian. The pressed-in parts in the head-tube were the same size, but the threaded parts were a slightly smaller diameter. Also, a French threaded fork and headset also requires a slightly smaller stem (22.0 mm vs. 22.2) which can make updating an old French bike a little more challenging. French freewheel/hub threading was close enough in size to British and Italian that one could almost fool himself that it would work, but if he tried to force a French freewheel onto a BSC hub, it would bind up and possibly ruin the threads - and to actually attempt to ride with a BSC freewheel on a French hub, it would probably strip right off as soon as any torque was applied. Again - OUCH.

For bottom brackets, there was no compatibility between the different national standards at all. Italian BBs are wider and slightly larger diameter than both BSC or French. Both Italian and French used normal right-hand threading on both sides, while BSC used left-hand or reverse threading on the drive side. The reverse-threading on the drive side of a BSC bottom bracket prevents the cup from loosening while riding which is a feature that should not be under-appreciated. Why French and Italian bikes weren't done that way has long been a mystery to me, but the potential for loosening can be an issue. I've only had a couple Italian-threaded bikes in my time, but one of them did loosen on a ride and the only way to prevent it was to use loctite and lots of torque.

Then, just to make things a little more interesting, there were the Swiss. The Swiss industry mostly adopted the French standard for threaded parts but with a notable exception - the bottom bracket. A Swiss threaded bottom bracket uses the same basic dimensions and thread specifications as French but uses reverse-threading for the drive side - just like the British. Here in the US, Swiss threading was fairly uncommon and maybe considered a bit of an oddball. I guess there weren't a lot of Swiss-built bikes imported to the US.

So, here's an interesting fact. The French company Motobecane used Swiss threading on many of their bicycles. Was it all of them? Most of them? I don't know the answer to that. If it wasn't all of them, then best of luck to any mechanic out there trying to figure out which way to turn the fixed cup on the bottom bracket to remove it. In my previous post, I mentioned my efforts to remove a stuck BB cup on an old Motobecane where I suspect someone in the bike's past perhaps didn't know that it was reverse-threaded. No "lefty loosie - righty tighty" here. It's also possible there was no mistake at all, since reverse-threaded fixed cups can simply get tighter with use the same way that right-threaded cups can loosen. 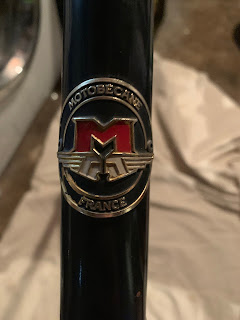 Whether I re-use that old bottom bracket or replace it with a new one kind of depends on what I decide to use for a crank. If I end up replacing it, there are options. British and Italian-threaded bottom brackets are still widely available. French ones are less common than the other two, but they are out there. Velo-Orange, for instance, offers their modern cartridge bottom bracket (and their headsets) in French threading. They don't, however, currently have a Swiss-threaded version. They do have an internally-expanding bottom bracket which they say works with any type of threading, even on bikes with stripped-out threading. Phil Wood makes retaining rings/cups for their excellent bottom brackets in the widest variety of threadings - including Swiss and even Chater-Lea (which is a real oddball today). The downside is that Phil bottom brackets  are pretty expensive - around $180 for the whole package. I was pleased to discover that Interloc Racing Designs (IRD) makes Swiss-threaded cups for their sealed cartridge bottom bracket which is a much more budget-conscious item. The IRD cups are sold separately, and I couldn't confirm it, but I wouldn't be surprised if they were compatible with some other brands of cartridge bottom brackets.

By the way, there's a terrific "crib sheet" for bottom bracket threading on the late Sheldon Brown's website.

Anyhow, by the 1980s, when international ISO standards were developed for bicycles, they mostly used BSC as their basis. For that reason, newer ISO parts will thread right onto most British and better quality American (and many later Japanese) bikes without trouble. Most bikes made today - at least those that still have threaded bottom brackets and headsets - use the ISO standard. Some Italian bikes may still use Italian. Of course, on many modern bikes, they've switched to press-fit bottom brackets and threadless headsets - and it seems like there are all kinds of unique and proprietary "standards" out there, making compatibility almost as much of an issue today as it was 100 years ago. I guess that's what we call Progress.
Posted by Brooks at 10:51 AM