As mentioned in my last post, I've started working on a 650B conversion on an old Motobecane. I picked up the frame pretty cheap - the paint was tired, but the frame seemed to be in good shape structurally, seemed to have good wheel/tire clearance, and I thought it might make a good candidate for such a project. 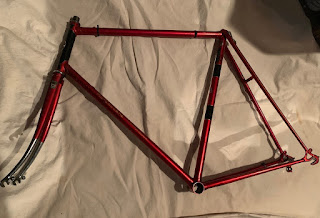 The model is the Grand Jubile, which was one of the better-quality models from the brand. In the early '70s the model was built with Reynolds 531 tubing and came equipped with Huret Jubilee derailleurs (hence the model name, I suppose) while another model, the Grand Record, came with Campagnolo Nuovo Record derailleurs (again - reflected in the name?). Above those in the company lineup were the "Le Champion" and "Team Champion" models. I did some research into the frame to figure out when my particular bike was made and how it might have been equipped originally. Big clues came from the frame tubing - Vitus 172 - and the rear dropouts, which were marked "SunTour." Those details meant that this bike would have been from 1977 - the first year for that switch in tubing choice, and by which time it would have been switched from the French Huret Jubilee derailleurs to SunTour. The Vitus tubing doesn't have quite the same cache as the Reynolds, but the quality is still quite good. 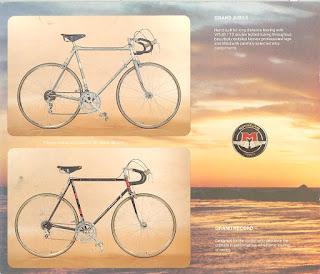 The next step will be to install the bottom bracket and then the crank. For the crank, I got a nice Velo-Orange crank that someone must have used a short time then removed for whatever reason. It had a couple of minor scuffs or scratches, but it was also just a fraction of the price of a new one (they currently run about $200).

That's all for now. My next update will look at modifying a current model stem to work with a vintage French bike. Another fun challenge. To be continued. . .
Posted by Brooks at 5:51 PM