Chater-Lea is one of those grand old British names of bicycle lore (as well as motorcycles and even cars). The brand dates back to the end of the 19th century, and they produced high-end bicycle components at least up through the 1950s and maybe '60s before going under. They made a range of bicycle components, but were probably best known for cranks and pedals. 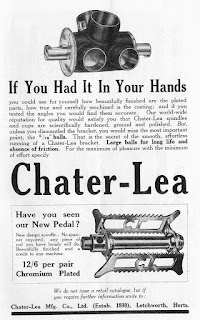 The brand has recently been revived by some investors (a "product strategy" firm - whatever that means), with pedals being the first of their new products. The revival of the brand and the release of the pedals was announced in a somewhat fawning article in Forbes and has been the subject of a lot of chatter among vintage bike enthusiasts, such as in groups like Classic Rendezvous and other bicycle forums. Reception has been somewhat mixed.

In the Forbes article, we get quotes from the new company's founder like this:

"It's for people who really care about materials, design, manufacturing . . . The analogy we use - and we think about this a lot - is high-end watches."

"We're aiming away from the peloton. Somebody enjoying the view, enjoying the ride, enjoying what's on the bike in the same way that when you buy a high-end watch you really enjoy telling the time."

Ok - that's goofy. People don't buy expensive watches because they "really enjoy telling the time." They buy them as a show of wealth, prestige, status. And that likewise makes me feel like this new iteration of Chater-Lea is about conspicuous consumption and rich people who view bikes as just more "lifestyle goods."

Another clue comes in the fact that, according to the Forbes article, the new Chater-Lea - which officially launched about two years ago with a Twitter feed and a website - has been set up as a "DNVB, or digitally native vertical brand." Wha' the hell is that? Apparently, a DNVB is "maniacally focused on the customer experience" and is a "means of interacting, transacting, and story-telling to consumers via the web." It is "born on the internet" and "aimed squarely at millenials and digital natives." A DNVB is totally integrated as a brand, a product, a website and social media - and I presume, a lifestyle. And now aren't you glad you know?

Ok, so what about the pedals?

Well, they are pretty, and apparently made with fine materials - like laser-cut stainless steel. They are clearly meant to be used with flat shoes - as I don't see an obvious way to attach toe clips or straps, or a "flip tab" to help a rider get into pedals with clips or straps. They are not simply a copy of the original company's products, an example of which you can see above, but a completely new - albeit retro-inspired - design. No word on price, but something tells me that all the talk about "high-end watches" isn't just about aesthetics. 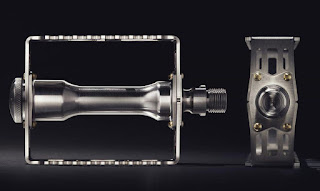 One thing I'm not so sure about - and it was a criticism leveled by people whose knowledge of these things far exceeds my own - is the way the cage (which is one piece) wraps around the body and is attached by very tiny little brass rivets. Some question whether that might be an issue for long-term durability.

My own preference would be to see a spindle body with a more traditional "H" shape, with the cages attached to the body with nicely-machined screws - which would probably be stronger, and allow for replacement should the cages become worn or damaged.

In fact, if we're talking about bicycle pedals that would appeal to the "high-end watch" set - combining the best of materials and design, it seems to me that the best traditional pedals I've ever seen and or used were those made by TA up until a few years ago.

The Chater-Lea website shows drawings for some other products they may be working on, including a crank and some toe clips:

It's nice that someone is interested in reviving a grand old name from the past, with a commitment to making high quality goods that are (at least presumably) more than just a name slapped on products mass produced in Taiwan. But I question things like "lifestyle goods" and marketing concepts like "digital native vertical branding." In the end, though, I doubt it matters much. I don't think people like me are really the intended market - but if the intended market isn't a retrogrouch like me, then who is it? Hmmm - maybe it's someone like me, but with a lot more money.
Posted by Brooks at 12:02 PM