It's widely considered the steepest street in Akron, Ohio.

To me, it's the only hill I haven't been able to ride up on a bike.

Bates Hill, on the near northwest side of Akron, overlooking the city's "skyline," reportedly has a maximum grade of about 28% and is one of the little quirks of the Rubber City. The hill has long been known by Akronites as "Cadillac Hill" because of the Cadillac car dealership that was (still is) located at the top end of the road. Local legend has it that the car salesmen of days gone by would often show off the power of the Cadillac's big V-8 engines by driving customers up the hill. Nobody has ever been able to tell me if they demonstrated the power of the brakes by taking people back down the same hill, but I can verify that it is a real test whether going up or down. 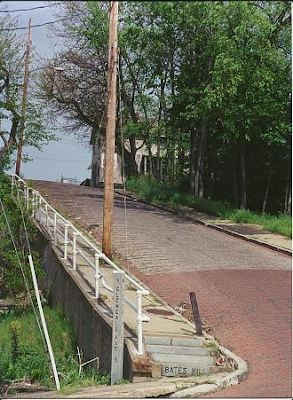 The hill is so steep that in a car, at the top of the hill, one can't see the bottom. One pretty much has to take it on faith that they aren't going to drop off a precipice.

One of the things that makes the hill so unique and such a challenge to ride is the odd feature of the road's brick paving. Built at the end of the 1800s, in the days before cars became commonplace, the paving in the steepest section of the hill is a combination of brick pavers set almost like miniature stairs, with raised granite stones that give something akin to a "washboard" surface which reportedly was done to give some purchase for horses' hooves. Every third row of pavers is raised slightly and I've read that the effect was computed based on the length of the average freight horse's stride. That paving feature led to yet another (though less common) nickname for the street: Jacob's Ladder. Suffice it to say, the tires of cars going up and down the hill make a hell of a racket.

That washboard-like surface makes riding down Cadillac Hill a bone-jarring experience, and the insanely steep grade and sharp 90-degree turn at the bottom make it even scarier. I don't recommend riding down it.

When trying to ride up Cadillac Hill, those raised pavers severely limit a bike tire's traction, while the steep grade is enough to make unintentional wheelies a real possibility.

I've made several attempts to ride up Cadillac Hill. Let me describe what happened.

In my first try, I attempted to ride up the edge of the road. The brick pavers are laid flat there (somewhat visible in the photo) and my first instinct was that it might be better than going up the washboard section. Better tire contact, I thought. My typical style when riding up any super-steep section of road is to pick the right gear and stand out of the saddle. In this case, I found myself putting more of my weight forward to keep the front wheel from lifting. As soon as I got to the steepest section, my back wheel just started spinning. Not enough weight on it. I ground to a halt, and just managed to stay upright long enough to get turned around and go back down.

My second attempt was again on the smoother paving along the edge, but I stayed in the saddle to keep some weight on the back wheel to get traction. Immediately my front wheel pulled up. Leaning forward to keep the front wheel down, the back tire started slipping again. I barely managed to get a foot out of the pedal in time to keep from falling over.

On my third try, I attempted to go up the middle and brave the washboard. As I'd predicted, the bike's tires (32 mm with fine road tread) weren't making good contact with the pavement. It was as if the tires would sort of skip over the edges and corners of the pavers, making traction a real difficulty. If I tried to go too fast, the tires would bounce over the surface and have no contact at all. Out of the saddle, weight forward, my back wheel started to slip. Shifting my weight back, and my front wheel pulled up again. Stymied again, I managed to turn around.

I made one more attempt on Cadillac Hill. I decided I needed to work at it as if it were a tightrope balancing act. I got out of the saddle, but kept my body low and centered with my knees slightly more bent than I might normally ride, and tried to keep my weight poised delicately between the front and rear of the bike. If I felt the front start to pull up, I shifted slightly forward, careful not to over-compensate. If the back wheel started to slip, I shifted slightly back. I kept a slow, methodical pace to minimize bouncing over the raised granite blocks, going just fast enough to not lose balance.

My efforts seemed to be working. I made my way up the "ladder" methodically. It turned out that I'd gained a spectator -- an old man was standing by the side of the road watching me climb. As I neared the end of the washboard section, just a few yards away from the spot where the grade reduces slightly, the old guy started to cheer.

I didn't make it. The moment my tires went from the washboard to the smoother bricks, the back tire spun. I was already going so slowly that the brief loss of momentum brought me to an immediate standstill. There I was, trying unsuccessfully to get a foot out of the pedal, and down I went, hard, smacking my hip against the granite blocks.

With both my hip and my ego bruised, I walked the remainder of the climb and went home. I have not tried again since. I know people who say they've climbed Cadillac Hill on a bike, but I've never seen it done, and I've never been able to do it myself.

Bates Hill. Cadillac Hill. Jacob's Ladder. The hill I haven't been able to climb. . . yet.
Posted by Brooks at 8:15 AM