Love and Scorn for Eroica

The second running of Eroica California happened last weekend. And once again, I wasn't there.

I read a lot about it in the anticipation and build-up to the event. And I've spent much of this week admiring people's photos, reading a lot of post-ride reports, analysis, critique, and even a fair amount of griping (mostly from non-participants -- from everything I've read, anyone who took part had a great time).

One notable criticism I read came from another well-known bike blogger, Patrick Brady at Red Kite Prayer. Brady participated in Eroica California last year, but chose not to attend this year. He wrote: 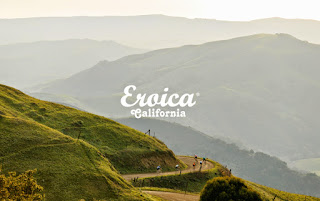 "At last year's event, I had a fantastic time. I rode with old friends, got to chat with Andy Hampsten, who continues to be one of the most humble and decent people ever to pedal a bike, and I conquered some remarkable hills.

My knees, though, they hurt for days afterward."

Brady then went on to explain his reasons for not participating this year. Difficulty in finding a suitable bike -- one that fits the vintage-style rules -- was a major factor apparently:

"There came a point where I was so frustrated by the search it caused me to think about the rule that requires riders to be on a vintage-style bike, to really think about it. It's evident that they are trying to grow the event as evidenced by the way it's being marketed and the amount of PR that's being done. Fine, if you want more people to come, make it easier for them to come . . . And it strikes me that the way Eroica is ruled, the event is essentially asking people to become collectors when they might not otherwise . . . Something about these rules feels divisive, and in our current political climate, I'd rather see us strive for inclusion, rather than rejection."

At the end of the critique, he closed with "If my bikes aren't cool enough, then I'm not cool enough'."

I won't dwell too much the RKP article, except to say that it sparked a huge discussion on The Paceline forum -- ("For the Hate of Eroica": currently at 12 pages). Some commenters heaped scorn on RKP's arguments - others piled on with more scorn for Eroica. It was also a big topic with the Classic Rendezvous group.

Some Paceline commenters dismissed the event (and its riders, presumably) as something akin to Renaissance Fairs and Civil War re-enactments, while others decried the "elitisim" of the vintage bike enthusiast community. Many more had questions and criticism for the rules of the event, which many find too arbitrary.

From my perspective, I think a lot of the criticism misses the point. Eroica is about trying to capture the spirit of an earlier era. That means that there must by necessity be some kind of "cutoff" for bikes and equipment. The Eroica rules state that bikes must be from 1987 or earlier, and have certain general characteristics such as downtube shift levers (or non-indexing bar-ends), traditional toe-clip and strap pedals, and traditional non-aero brake levers. The rules are not overly restrictive, however, in that they allow new or post-'87 bikes as long as they conform to the other rules regarding style and construction. And there are no restrictions on gearing, so if someone really wants to use a triple crank with a super low granny gear, as long as it has the right general look, there's no problem.

Is the 1987 date arbitrary? Considering that it's almost impossible to pin down the beginning or ending of any "era" to an exact date, one could argue that, yes, it is somewhat arbitrary. But any date would be. The Classic Rendezvous group sets their cutoff at 1983 for various rational reasons, but even that date occasionally leads to compromises and disagreements. The Eroica organizers had their own rational reasons for choosing 1987 as their cutoff, and one is free to agree or disagree. Nobody has to do the ride, and there are plenty of other rides out there - centuries, gran fondos, and more -- where people can ride whatever they like. But they aren't Eroica.

The rules are what they are. They may not be perfect (yes, we know that some aero brake levers were available before 1987 -- get over it), but they certainly aren't "divisive" or "elitist." There is no implication that modern bikes and the people who ride them are somehow undesirable or "uncool." In fact, I have no doubt that most Eroica participants also own and ride more modern bikes. But modern bikes don't fit the theme of the party. Simple as that.

Another thing. Vintage (or at least vintage-styled) bikes are not that hard to come by, and are typically a lot less expensive than modern bikes. Insisting that riders use "Eroica-compliant" bikes hardly pressures anyone to become a vintage bike collector. If someone insists on having a mint-condition 1970s Masi with full Campagnolo Record components for Eroica, then yes that will require a bit of an investment, but it's still likely to cost less than a new Dura-Ace Di2 component group (just the components, not the complete bike).

So why don't I go to Eroica? Fact is, I'd LOVE to go. I already know exactly what bike I'd take if I could ever do it. Unfortunately I have two major strikes - cost and time. The cost of doing the ride puts it out of my budget. It's not necessarily the price of admission (registration is $150 - 200, pricey, yes, but by all accounts it is an excellently organized ride) but for myself I'd also have to factor in the cost of flying to California from Ohio and transporting a full-size vintage bike, then add in hotel accommodations, and it becomes a pretty expensive trip. But that's actually the lesser problem for me. In my case, much more than the cost, my job makes it virtually impossible that I'd ever be able to go. Everybody knows that teachers get a lot of time off, like summer for instance. What most probably never think about is that teachers have almost no choice or flexibility for when they get that time off. Making a trip during the school year is pretty much off the table -- and for my own teaching contract, taking even one or two days off for a "vacation" is strictly prohibited. Unless they someday schedule Eroica during a time when there's already a break at school, it's unlikely that I'll get to attend.

In the meantime, I'm enjoying the ride reports and the pictures with a tinge of envy.

Here are some links to photo galleries from the event:

Justin Tunis Photographs - Getting Heroic
The Beautiful Bicycle - Eroica California Gallery
Handbuilt Bicycle News (there are several posts from the event, including details on some of the bikes people rode).

Check those out, and more, if you get a chance.
Posted by Brooks at 9:29 AM