All attempts at resuscitation have failed. The patient cannot be saved. Somebody call it: Time of death . . . ?

The problem of doping in its various forms, with systematic sophistication, left the sport in critical condition, clinging to life support. Officials with the UCI and various anti-doping agencies would have liked to convince us that once they stripped "He-Who-Must-Not-Be-Named" of his 7 Tour de France titles, that the illness was cured -- they had exorcised the demons, purged the poisons, and the sport could live on. But I doubt that many believed that doping began or ended with Lance Armstrong.

Even now, with suspicion of drug use still hanging like a sword over the head of anyone capable of winning a major bicycle race, a new cancer seems ready to end it for good: "Mechanical doping."

Rumors have been flying around for several years now about racers using hidden motors. Videos capturing suspicious bikes and behaviors in pro races have gone viral, but it was all just speculation until earlier this year when bicycle racing had its first confirmed case of "mechanical doping." Femke Van den Driessche was caught using a motorized bike in the Cyclocross World Championships and was disgraced. Soon afterwards, the Italian sports newspaper Gazzetta dello Sport reported that the type of motor hidden in Femke's bike was already "old stuff . . . poor man's doping." The un-named source claimed electromagnetic wheels are the "new frontier."

Some may still have had their doubts, and many would have liked to think that the Van den Driessche case was an aberration, and that it was still highly unlikely that any professional road racers (or even wealthy amateurs and gran fondo riders) would actually attempt to cheat so blatantly. Whatever rationalizations people might be willing to make for performance enhancing drugs, actually hiding a motor inside a bicycle is just so obviously cheating and it's impossible to see it any other way. No professional would stoop so low, right? In fact, one French professional racer, Romain Feillu, has recently made the claim that such blatant cheating would require such a "huge level of complicity" between riders, mechanics, and the like that it would be "impossible." Nevermind that the same level of complicity allowed rampant drug use to sweep up entire teams, so why should this be any different?

Regardless of complicity, another recent report makes the case that it is almost certainly happening. The French television network Stade 2, in cooperation with the Italian newspaper Corriere Della Sera, conducted a pretty damning investigation into the use of hidden motors in high-level bicycle racing. Using a thermal imaging camera at the Strade Bianche race in Italy, as well as the Coppi e Bartali race, the reporters claim to have found as many as seven bikes that were likely using some type of motor, as definite heat sources glowed in seat tubes, bottom brackets, and hubs.

One might ask, isn't the UCI checking bikes for motors? Well, yes, but the checks are haphazard and, according to the investigation, quite possibly flawed. Using handheld tablets (like iPads) with an app that detects disruptions in an electromagnetic field, officials wave the tablets around team bikes randomly - and if they get a suspicious "hit" they may or may not pull the bike for closer inspection. But how much of an electromagnetic field does a motor give off when it's not actually running? How well do the iPad apps work when being waved around bikes up on a roof rack? And why would I say "may or may not" pull the bike for inspection? I just read where at least one UCI commissaire isn't sure they have the legal authority to confiscate a bike.

In Cyclingnews, commissaire Philippe Mariën was quoted saying, "If the UCI wanted me to check bikes at the Amstel Gold Race on Sunday morning, and let's say I discovered a bike there that was, let's call it, imbalanced, and I would like to take it with me. Do I have the power, as a UCI commissaire, to confiscate the bike? I don't think so. Honestly, I don't think so."

In the meantime, the UCI is adamant that their current testing protocol is sound. In response to criticism after the Stade 2/Corriere Della Sera report, professional cycling's governing body said, "We have looked at thermal imaging, x-ray and ultrasonic testing but by far the most cost effective, reliable and accurate method has proved to be magnetic resonance testing using software we have created in partnership with a company of specialist developers. The scanning is done with a tablet and enables an operator to test the frame and wheels of a bike in less than a minute."

From my view, I have no doubt that the tablets are "cost effective" but considering they've only flagged one bike (with an "old stuff . . . poor man's doping" motor), I'd have to question the "reliable and accurate" part of that statement. The Corriere report specifically dismisses the tablets and their software as unreliable.

I also saw in Cyclingnews that, despite claims by the UCI, many bikes are not tested prior to racing. Sometimes bikes aren't tested until after the races are completed, but it wasn't clear to me whether or not mechanics would have time and opportunity to make necessary changes to the bikes, such as disabling motors -- something that can reportedly be done with a simple bluetooth device, including wristwatches. A scene in the Stade 2 report shows a mechanic working on one of Alberto Contador's bikes, spinning the rear wheel repeatedly while fiddling with his watch, before taking the bike into a tent to make some changes. In the context of the report, it seems unusually suspicious.

In the Stade 2 program, there's a pretty tense scene where the reporter shows some of their thermal imaging photos and videos to UCI President Brian Cookson. The man's facial expression says a lot - at one point it seems he can't stop blinking, as if he can't look any longer. Does he still think their testing is reliable? 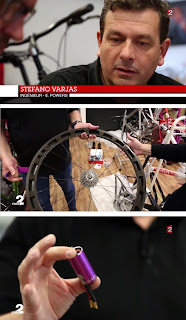 Just like performance drug dopers have their Dr. Michele Ferrari, the "doctor" of mechanical doping may be a Hungarian engineer named Stefano Varjas, whom I suspect is probably the "unnamed source" from the earlier Gazzetta dello Sport article. In the Stade 2 investigation, he shows how small the motors have gotten, making them even easier to fit into bike frames, hubs, and bottom brackets. He also displays a cutaway of one of the electromagnetic wheels that were mentioned in the Gazzetta article earlier this year, and the report shows an explanation of how it works.

According to Varjas, the little motors, which can drive a bottom bracket, can produce up to 250 watts. The electromagnetic wheels produce about 60 watts, which may not sound like a lot, but can make a big difference when used at the right moments in a race, such as on a climb.

Like a lot of people, I figured it was just too hard to believe that motorized bikes would make their way into professional bike racing. It seemed too stupid. Too blatant. I'd hear the rumors, and see the suspicious videos on the internet, but assumed there was nothing to the claims. But after following all these reports about the motors -- how small they've gotten, how easily they are concealed, combined with the thermal images, and other suspicious actions in racing -- it just gets harder and harder to deny that there are some pros who may be using them - at least in some races or stages. As if the sport had any credibility to lose.

In a lot of ways I feel like I've gone through this whole thing before. It wasn't all that long ago I would read the stories about EPO use, and I remember wanting to believe that my favorite racers weren't actually doping. And then there'd be a positive test, followed by denials, accusations, and counter-accusations, until the evidence was so overwhelming that it wasn't possible to deny any more. Sometimes people would use the defense that they had never failed any drug tests -- but then others would come forward to tell just how easy it was to keep a step ahead of the testing protocols to avoid detection.

And now with the motors, it all sounds so familiar. Only one bad, bad person was caught doing it. Everyone else is honest. Unfortunately, it appears "passing" the tests may not be so much proof that people aren't cheating as it is that they maybe just aren't getting caught.

So, will I be watching the Giro d'Italia this May? Or the Tour de France in July? I just don't know -- I really don't know if I'll be able to stomach it. If I do, I won't be able to take it any more seriously than I would a WWE wrestling match. Next time I see someone power away from the group, putting in a heroic effort, I'll probably be listening carefully for the sound of a little whirring motor.

I don't know if I'm the best person to call it. But I think professional bike racing is dead.
Posted by Brooks at 7:21 AM