Don't want to end up looking like one of those zombies from Walking Dead? Then always wear a helmet when you ride -- or better yet, never ride a bike. 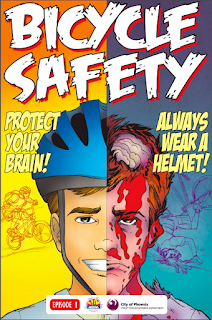 At least that's the message I think any reasonable person would take from a series of bicycle safety "comics" put out by the City of Phoenix Dept. of Transportation.

In the series of "graphic novels" (emphasis on the word graphic) created for "youth age 9+" one kid sits dazed on the pavement with his brains practically falling out of his head. GA-GUSH! Another crashes through plate glass and has gory wounds oozing from his arms and legs. KAKRACK! A third is impaled on his own handlebar -- a gaping, bloody hole in his gut. YEE-ARGH!

The City of Phoenix commissioned the comics and has been distributing them to the city's schoolchildren at safety programs put on in the schools, and at other safety events around the community. They were paid for by grants, and illustrated by Rob Osborne who claims that the goal in the project was to be "over the top" and that he has heard little negative feedback.

I don't know what to make of that, but maybe the parents of children who receive the books don't know who to complain to, which might explain why Osborne never hears the feedback. As far as the car-centric officials who commissioned the comics, I'm sure they send exactly the message they intended. Riding a bike is dangerous. And when cyclists get injured or killed, it's entirely their own fault.

What are we saying? Victim blaming?

Every dead or injured kid -- all of them teen or pre-teen boys -- ends up getting maimed or killed due to his own stupidity or negligence. There are no distracted, impatient, or negligent drivers -- because as we all know, "accidents" are never caused by bad drivers. That's why we call them "accidents."

Of course, there's the usual helmet sensationalism - right there in Episode 1.
Yes, kids should wear helmets. Even experienced cyclists should recognize that it's a bad idea to assume they'll never crash or hit their head. On the other hand, it's an inconvenient fact that if a cyclist gets nailed by a 3-ton SUV, that 6-oz. foam hat isn't likely to make a big difference. There are a lot of things that contribute to riding safety, but a helmet is only a small part of the picture.

The "lesson" on avoiding the blind spot (Episode 4) has a kid get totally flattened trying to pass on the right of a truck -- complete with lots of comic-book "sound effects": CRACK! CRITCH! CRUNCH! GUSH! KRA-KRACK! AAARRGH!
Just prior to getting his legs crushed under that truck, the kid is shown doing wheelies in the street and yells to his friend "Don't try to hold me back. I know what I'm doing!"

Yes, it's dangerous to pass a vehicle on the right -- but what's more common in this type of collision? That the cyclist is passing on the right? Or that the cyclist is jeopardized because the cars and trucks are the ones passing the cyclist then turning carelessly? And there are defensive measures one can try to take to avoid getting the dreaded "right hook" -- but instead of presenting it that way, they present in a way that fits with the car-centric view -- another wise-ass cocky kid getting a painful lesson.

Then there's the kid in Episode 3, who rides with bad brakes, skimming alongside cars in the door zone:

As if taking a header through some glass isn't bad enough, he gets impaled on his uncovered bar end:
Another episode has a kid riding against traffic - despite warnings from his friend:

He then inexplicably rides right through some panes of plate glass on a moving glass truck.
Nobody should ride against traffic, but honestly, I can't see how this particular crash is due to riding on the wrong side of the road. If either the kid or the truck ran a red light - maybe - but the scenario here is pretty unrealistic.

Then there's the kid in Episode 6  who runs away from home (Why? It doesn't give us a clue. Must be due to unresolved rage and a resentment toward authority) and as long as he's running, decides to run a stop sign. . .
I'm a parent with two young kids, and we love to ride together. Some of our riding is on a local bike path, and some of it is riding around the neighborhood streets, going to the library, or out for dinner, or the grocery store. When I ride with my girls in town, I stay close by them and keep a watchful eye for hazards and point things out to them that they should watch for. I emphasize following rules, using common sense, and predicting what other people might or could do. I make sure they understand that there are dangers, but would never want to leave them with the impression that they should be scared of riding a bike -- which is exactly what "comics" like this do. They are just more propaganda designed by a car-centric culture to brainwash kids (and their parents, too) that riding a bicycle is dangerous. If someone came to my daughters' schools handing out sensationalist anti-cycling propaganda-posing-as-educational-material like this, someone would get a real ear-full from me.

Instead of putting real effort into educating drivers about how to share the streets with cyclists and pedestrians - instead of working on infrastructure and policies that might help make cycling safer - instead of taking real measures to reduce the threats posed by inattentive drivers -- transportation officials continue to propagate the idea that cyclists are the problem. These "comics" don't do much of anything to teach kids about the very real dangers that are presented by drivers of cars and trucks - and they totally leave drivers off the hook for the things they do that put cyclists at risk. And these comics are nothing new. The Automotive-Industrial-Complex has a long history of using scare tactics like these to place the blame of deaths squarely on the non-motoring victims - the cyclists and pedestrians.
Cycling safety is important. Proper education about safe riding AND driving is needed - but not more scare-tactic propaganda like this.

By the way - thanks to Retrogrouch readers Brian I. and Rick B. for drawing my attention to these!
Posted by Brooks at 12:25 PM