The Bicycle Test and Unrideable Bikes

Regular Retrogrouch readers know that my full-time job is teaching English and Speech Communications. In Communications, one of the things I occasionally bring up is how men and women communicate differently, and how their brains may even be wired a little differently. To illustrate that point, I reference a common psychological test that goes back at least to Jean Piaget in the 1930s  - something known as the Bicycle Drawing Test. Used as a gauge of cognitive development, mechanical reasoning, and visual-spacial functioning, the test asks subjects to draw a bicycle from memory. Men tend to do a little better at the task than women, and regular cyclists tend to do better than non-riders -- but regardless, for many people, it turns out to be a difficult task to draw a viable, workable bicycle from memory, and the resulting drawings can be amusing.

It turns out that most people know a bicycle when they see one, but don't apply much thought to its form or function. They know there are a couple of wheels. Most remember that there are some triangles involved. And a chain, somehow. But specifically how those various elements fit together to make a functioning bicycle eludes many.

I recently spotted this really interesting design project by Gianluca Gimini of Italy on Bēhance. Called Velocipedia, Gimini has collected hundreds of such bicycle memory drawings and then computer-rendered them to look like actual machines.

Here are a couple of samples: 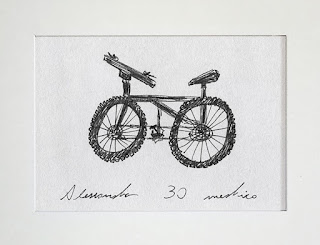 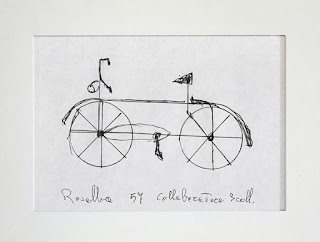 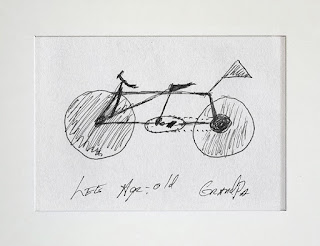 Gianluca Gimini gives a bit of background on his project:

"Back in 2009 I began pestering friends and random strangers. I would walk up to them with a pen and a sheet of paper asking that they draw me a men's bicycle, by heart. Soon I found out that when confronted with this odd request most people have a very hard time remembering exactly how a bike is made. Some did get close, some actually nailed it perfectly, but most ended up drawing something that was pretty far off from a regular men's bicycle."

During the course of this project, Gimini collected 376 drawings from people ranging in age from 3 years old to 88. Although he didn't realize (at least at the beginning) that the Bicycle Drawing Test was an actual psychological test, some of his findings seem to echo those done by more "academic" psychological studies. For instance, "Nearly 90% of the drawings in which the chain is attached to the front wheel, or both to the front and the rear, were made by females. On the other hand, while men generally tend to place the chain correctly, they are more keen to over-complicate the frame when they realize they are not drawing it correctly."

An interesting observation on the project is that the most "unintelligible" drawing, with the most unintelligible handwriting, came not from the 3-yr. old, but from a doctor. Must not have been one of those Serotta-riding doctors I hear so much about.

There is much more to see on Gimini's project page, so I encourage readers to click on over there to check out the collection.
Posted by Brooks at 10:10 AM