It's been a little while since I've had any new posts, but I'm just wrapping up a family vacation in Canada. I brought a bike with me on the trip, so I've been able to do some riding while we're on our visit. Let me share a little from my first Canadian stop.

We made the drive from Ohio up to Buffalo, New York - about 4 hours - and crossed into Canada at the Peace Bridge connecting Buffalo to Fort Erie, Ontario. After sitting for a good half-hour at the customs checkpoint on the Canadian side, I unloaded my vintage red Mercian from the car and headed straight for the Niagara Parkway which follows the Niagara River from Lake Erie to Lake Ontario, with Niagara Falls being roughly half-way between. My family continued on in the car to drive to the Falls and then on to the picturesque town of Niagara-on-the-Lake where we'd be lodging for the night. 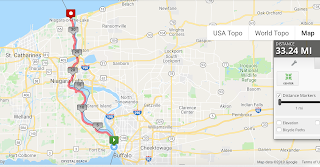 The Niagara Parkway is a great bike ride - a little over 30 miles from Fort Erie to Niagara-on-the-Lake, and mostly flat. I've done it a few times in the past and I always stick to the road almost the entire ride - but if someone is not happy sharing the road with cars, there is a separate walking/biking path that follows beside the parkway for most of the distance.

Of course, the day I made the ride was probably the hottest day of the year - breaking records in many places. It was easily in the upper 90s with ghastly humidity. But I'd been planning and looking forward to the ride for long enough that I wasn't about to let that stop me.

My family and I had planned to meet up at the Falls, but finding each other would have been nearly impossible with the massive crowds. Worse still, parking the car was going to be a nightmare - so they just drove on by. They'd all seen the Falls before. 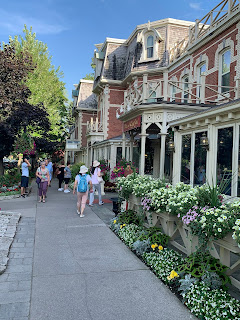 We spent the night in town and got breakfast in a nice bakery on the main drag in the morning before heading off to our next stop - Montreal. Got to brush up on our French.