This past weekend I took a drive up to visit with my Michigan friends and take part in a memorial ride for framebuilder Randy Smolenski. Randy probably wasn't that well known outside of western Michigan, but he ran what sounds like a pretty terrific bike shop in Grand Rapids, and built some great bikes for the racers and club riders in that area. He had died in 2017 at about 70 years old. His birthday would have been Saturday.

Riders on Saturday were encouraged to ride their Smolenski-built bikes, though not everyone could do that (myself, for instance) and so the ride was an opportunity to see a bunch of examples of his work together in one place, and for people to share memories and swap stories about the builder. I heard a lot of them, and all I can say is that Randy must have been a real character - extremely knowledgable about bikes, perhaps a little "gruff" about it at times. Didn't suffer fools. Heart of gold. If he gave advice about bikes, it was best to follow it because he was very nearly always right. My kind of guy. All I can say is I wish I could have visited that shop and met the man.

According to my pal Jim T. who organized the ride, Randy started building bikes back in the early '80s because he was increasingly dissatisfied with the quality of bikes he was dealing with, and that included the workmanship on expensive Italian bikes from very prestigious names. Alignment issues, poor brazing or mitering, etc. He just knew he could do it better, and so he did. Looking at some of the examples on Saturday's ride, it was clear that Randy had developed a very distinct style in his frames - most of which were for racing. Super tight geometry, close clearances, fastback stays, clean and simple lugwork - the bikes just looked fast. He didn't build a lot of bikes - Jim estimates the number to be no more than about 150 - but it's hard to say for sure because Randy didn't bother with things like serial numbers, meticulous records, or anything like that. It's possible he couldn't have given a more accurate estimate himself.

The ride was about 60 miles, mostly flat, with a lot of it on the White Pine Trail which is a former railway line converted to bike trail. That much of the ride pretty much followed the same course as another group ride I participated in last year. But then the route took us away from the trail, through some pretty countryside and out to place called Baptist Lake where Jim has a cottage beside the lake. There we had a nice lunch, prepared by his wife, then we rode back the way we came. It was super hot - upper 80s at least - but with a good breeze to make it tolerable. We were joined on the ride by Randy's widow, Deb, who was happy to see how well Randy was remembered by riders in the area. It was a real pleasure to meet her.

A Look at the Bikes: 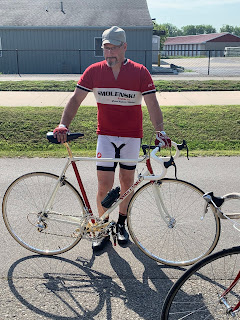 There were a few non-Smolenski bikes along for the ride too. Here are some of the "Retrogrouch-approved" examples.

Saved by a Peanut Butter Wrench:

It turned out that my choosing a fixed gear bike had an unintended good consequence for the ride. Because I have my rear wheel attached with track nuts instead of a quick release, I always make sure I have a wrench packed in one of my bags in case I need to remove the wheel to fix a flat tire. And though there are smaller, more compact tools for that eventuality, I just make a habit of carrying a Campagnolo crank bolt wrench - aka the "peanut butter wrench," which is useful on crank bolts and track axle nuts alike. About 25 miles into our ride, one of our group suddenly discovered, to his horror, that one of his crank arms was coming loose. In a lot of instances, that would be the end of someone's ride. In fact, Jim was in the process of dialing his wife on the phone to see if she could drive out to the rescue. Once I realized what was going on, I yelled out "Oh my god - I've got this!" We got the crank bolts tightened up solidly and were back on the road in minutes. Peanut butter wrench saves the day.

Once again, it was great to get up to Michigan to ride with some old friends and meet some new ones. A big "thank you" goes out to Jim T. for putting it all together.
Posted by Brooks at 1:38 PM