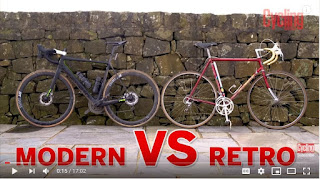 I was recently enjoying a short video on YouTube from Cycling Weekly - Modern vs. Retro, in which a young rider gets his first experience with a vintage bike and does a full back-to-back comparison between that and a bike that represents the current "state of the art." A few years ago I wrote about a similar video from Global Cycling Network. Have you ever seen one of those videos where parents give their kids a bit of old technology, like a Sony Walkman cassette player (something every kid in the '80s wanted or coveted) and then watch in amusement while their post-millenial kids try to figure the thing out? I find these things pretty entertaining in the same way, and any retrogrouch will find a lot of "These kids today" moments in this one. I can't help but alternatingly grin and grimace as young riders raised on clipless pedals and STI shifters find themselves flummoxed by toe straps and downtube shifters. 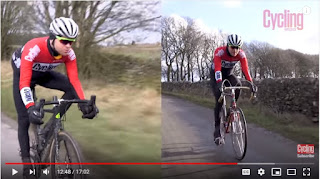 In this 17-minute video, Cycling Weekly contributor Oliver Bridgewood, whom I'm guessing is still a few years shy of his 30th birthday, rides a couple of circuits in Britain's lovely Peak District - first on a thoroughly modern Cervélo R5 with wireless electronic shifting and hydraulic disc brakes, then rides the same route with a mid-'80s steel-framed beauty from George Longstaff with a suitable mix of L'Eroica-ready components. Bridgewood readily admits that he's never ridden a vintage bike like the Longstaff before, and his inexperience shows throughout the video - so it seems unfair to be overly critical when he misstates various aspects of the vintage bike. And besides, it's all just in good fun.


Out on the road, the young reviewer shows his surprise about the nice ride quality of the vintage bike. "I'm AMAZED at how comfortable this bike is! The way it can kind of eradicate the road buzz that you get is . . brilliant! I'm going to say it's better than the Cervélo." He goes on to describe the power transfer and the difference in the feel at the bars, pointing out that it encourages a rider to ride down in the drops more. I don't think he recognizes exactly why that's the case, but he's describing something that I've written about before - how the "drop" from the saddle to bars has really increased on racing bikes today - and how modern bikes encourage riding on the top of the brake/shift levers. The drop from saddle to bars on vintage racers like the Longstaff is much less (making the bars feel relatively higher) - so that getting into the drops isn't all that much lower than being on the top of the levers on a modern bike.

After concluding that he could get used to the gearing (he's gone from 12 cogs to 6! He comments, "This bike's from a different age - when men were men.") and other "quirks" of the vintage era, he says the only area that he really found lacking was the brakes. I guess that's to be expected. Honestly, it seems like everyone who reviews bikes these days has to praise disc brakes almost as though anything with rim brakes is unsafe to ride. Having ridden (or at least tried) just about every kind of brake system available on bikes today, I just do not perceive disc brakes to be the total revolution that all the cheerleaders proclaim them to be. True, he is riding the bikes in wet conditions, which is where disc brakes enjoy their biggest and most noticeable advantage - but the Mafac cantilevers on the Longstaff really should have all the stopping power anyone should need. Seriously - I've seen a lot of nice tandems that relied on the same exact brakes with no trouble. But here's the thing: they need to be set up properly. Take a look here:

One thing brought up in the video that struck a chord with me was that he talks about the longevity of vintage bikes. "I think it's a testament to the design of old bikes that we still see a lot of them now, still with original components on them, and they still work and function as well as they did when they were first made." Of the modern bikes he adds, "I wonder how many modern carbon bikes we will see in the future. Maybe we'll see loads. Maybe they'll last a long time. But modern design seems to be a lot more consumerist and a lot more 'throwaway'." There's a lot of truth in that - and he goes on to compare it to other modern products and especially things like electronic goods, phones, etc., that are obsolete after only a few years.

In the end, I like that the young reviewer is fair and not automatically dismissive of the vintage bike. He gives it a chance and shows it some respect. "It wouldn't be fair to say this is better than that, or that is better than this," he says. "They're different, and cycling is all the better for it." As he wraps up the video, he admits that if he were going into a road race or a criterium and had a choice between the two bikes, he'd absolutely take the modern bike - but then adds "Cycling shouldn't always be about racing, and performance, numbers, and Strava. Riding a bike like this makes you remember that. It makes you remember why you ride a bike in the first place."

Yeah - I like that. And if you have about 17 minutes for a fun little diversion, check out the Modern vs. Retro video. You can watch it on YouTube, or right here: