Putting It All Together

I've been making some progress putting my vintage Sequoia together, though I've been taking it slow. There's not a rush (weather hasn't exactly been beckoning me to get out to ride it), and I see nothing wrong with doing a little at a time - plus, I get to enjoy the project longer.

It occurs to me that I have built up dozens of bikes from framesets over the years - maybe many dozens. I suppose everybody does things a little differently when they build up a bike, but when I take a bare frame and start building it up, I follow a pretty consistent process. Here's what I've done so far with the Sequoia:

In the previous post, I showed that my first step after getting the frame back from the painters was putting on decals. Next comes installing components. For me, the first thing I do is install a seat post - in this case, a new-old-stock SR Laprade - and the reason it's the first thing is because when I put a bike into a workstand, I always want to clamp the bike by the seat post rather than one of the frame tubes. I've seen more than a few frames that were damaged by clamping the workstand jaws around a frame tube. With the frame held firmly in the workstand (by the seatpost!), I can start installing the rest of the components. 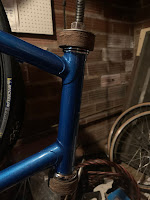 My next step is usually the headset and fork. To press in the headset cups, I use a homemade headset press -- just a threaded rod, some washers and a couple of nuts, and some wooden blocks to help keep the press aligned and to help prevent damage to the cups/races. Some modern sealed bearing headsets (like Chris King) require a dedicated press and special adapters to prevent damage (and I assume to preserve the warranty), but my homemade press seems to work just fine on traditional old style headsets like the one I'm using.

After the fork, I usually install the bottom bracket and then the crankset. For my bottom bracket, I have a Phil Wood. Yes, they're expensive, but they are trouble-free and seem to last forever (I've got one on my Rivendell that's going strong after nearly 20 years!). Mine was sold as "used" but it looked and felt like brand new, and cost barely more than half what they usually cost. One additional feature of the Phil BB  besides its extremely long service life is that it has a little bit of adjustment laterally, so a person can fine-tune their chainline. 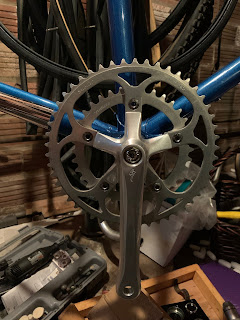 I had a slight change in my components since I last wrote about my selections. I had mentioned that I was hoping to find a Specialized crankset (preferably the early '80s "flag" logo version) for the Sequoia. Since writing that, I did find my "close second" - a Specialized ST-4 triple. The design of the ST-4 looks almost identical to the original "flag" crank, but was made a few years later and can be identified by the slash "S" logo. The one I've got appears to have had almost no use at all. I did take off the inner chainring to make it a "compact" double with 50/36 rings. 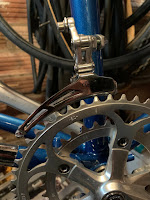 Next comes the derailleurs. The rear one is a simple bolt-on operation. The front needs to be properly aligned with the chainrings. I like to get the height set up so that the cage is about ⅛-inch above the large chainring -- super close but without any danger of the cage hitting the ring. I sometimes see bikes with a huge gap (like 1/2 inch or more) between the front derailleur cage and the chainrings and all I can think is how the heck does that thing even manage to make the shift? For the angle, I usually start with the cage parallel to the chainrings, though I sometimes tweak that by a degree or two after I get the chain installed and see how the shifting is.


After the derailleurs, I'll put in my wheels, followed by brakes.


Well - that's all the major stuff. The next steps will be installing the cables for brakes and shifters, along with chain, toe-clips and straps. Then all the adjustments and fine-tuning. Lastly, wrapping the bars. That will all be covered soon. Stay tuned. . .
Posted by Brooks at 7:24 AM