In a recent post, I mentioned that when clamping a bike into certain types of work stands, it is not a good idea to clamp the jaws onto a frame tube as the thin-walled tubes can be easily damaged. For that reason, I always clamp around the seatpost, which tends to be thicker and less likely to suffer.

As mentioned in that post, I've seen multiple frames that had been damaged from a work stand clamp, including one of my prized Mercian bikes. The damage to the Mercian was not readily noticeable and I didn't even see it when I first took delivery of the vintage frameset, but the seat tube just a few inches below the seat lug was crimped slightly -- the size, shape, and location of the crimping was totally consistent with the jaws of some work stands. I could see it if the light shone on it just right, but the real issue presented itself in trying to install the seatpost. It seemed that the right size seat post should have been 27.2 mm, as that was what would fit into the seat lug properly. The problem was that I couldn't insert the post more than a couple of inches. A few inches in, it would get impossibly tight. For a while, my solution was to use a smaller diameter post (I think I needed to go down to 26.8) and put a shim at the top where the seat lug/binder would clamp around it. I say, that worked, but I didn't like it as a permanent solution.

I thought about sending the frame off for a professional repair. Had the damage been worse, or been on any other frame tube, I probably would have sent it out. Being that it was pretty shallow and on the upper part of the seat-tube, which is open at the top, I thought I could probably try fixing it myself first. I hope nobody with frame building and repairing experience cringes when they read that, but I had a pretty good idea of the mechanics and the process of it and decided it was worth a try.

First, it's good to have an understanding of what a dent or crimp like this actually does to a tube.

Having corresponded with framebuilders and others with frame repair experience over the years, I've learned about a couple of different tools that they use to remove dents. To work from the inside of a tube (if one has access to the inside, as in a seat-tube or head-tube) to remove the "low" spot, they might use some kind of tubing expander tool. And to work the "high" spots on the outside of a tube, they'll use frame blocks like these:

If one isn't in the business of doing these kinds of frame repairs, then the cost of tools like this can be pretty expensive. My home-garage solution consisted of a cheap "sacrificial" seatpost, and homemade wooden frame blocks.

For the frame blocks, I took a block of wood and bored a nice straight 1-1/8-inch hole through it with a forstner bit, like this one: 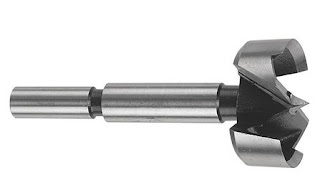 Next, I split the block in half with the grain. I didn't want to saw it in half, as that would remove some material and my resulting bore would be somewhat less than 1-1/8 inch, and no longer perfectly round. Another way to do it is to cut the block in half first, clamp it tightly together, and then bore the hole between the blocks.

To perform my operation (and again - try not to cringe), I started by inserting the extra long 27.2 mm post into the seat tube. When the post started to encounter resistance, I kept twisting and lightly tapping it in. I made progress very slowly, tapping and twisting until I knew the bottom of the post was well past the crimped part of the seat tube. Would I be able to get it back out? Well, it seemed to me that as long as I could twist it (even if it took some effort) I'd be able to get it out. But I also calculated that if I successfully removed the crimping, it would come out easier than it went in.

To work the outside of the crimp, I heavily greased my wooden blocks and placed them around the dent and put them into my vice. It is important not to tighten the blocks all the way, but to get them to where there is just a slight bit of resistance, and then twist the frame back and forth between the blocks. You have to work slowly, twisting the frame, slightly tightening the blocks - continually twisting, tightening, etc.. It takes some patience as you don't want to force anything or do too much too quickly. I didn't have much trouble because my dent was not particularly deep or sharp - and it was definitely lessened by tapping the seatpost down through the dent.

After I got the blocks tightened all the way and could twist the frame freely between them, I could tell it was done as well as I was going to get it. I took the blocks off and removed the seatpost. I knew immediately that the crimping was better because getting the seatpost out was much easier than getting it in. That shouldn't be a surprise - the seat tube was now much rounder than when I started.

It's also important to note that the frame block operation can often destroy the paint. I was lucky. Whether it was because I was using wooden blocks, or lots of grease, or because the damage was so minor to begin with, but my paint only got a bit "scuffed" but wasn't badly damaged. I was able to buff it back to where you could hardly tell. Even in good light, it's really hard to see there was any damage at all. Best of all, I can get the proper seatpost inserted without trouble.

I want to point out again that I normally leave frame repairs up to the experts, and I don't necessarily recommend other people try to do what I did here. Unless someone feels really confident in their home-wrenching skills, I might say this is one of those "Don't try this at home" situations. As I'd said earlier, if the damage had been worse than it was, I might not have even tried it myself, and even as I was doing it, I proceeded slowly and with a lot of caution. But in the end, I was happy with the result, and satisfied knowing I did it myself.
Posted by Brooks at 10:20 AM