Cycle Cinema: A Boy, A Girl, and a Bike - RIP Honor Blackman

British actress Honor Blackman died last week at age 94. She was perhaps best known (at least in the U.S.) for her role as "Pussy Galore" in the James Bond film, Goldfinger. British audiences knew her before that for her role as the leather-clad, motorcycle-riding Cathy Gale in the British T.V. series, The Avengers.

But Blackman led an interesting life well before either of those roles made her famous.


In World War II, Blackman, still just a teenager, was a dispatch rider for the British "Home Office" - delivering messages by motorcycle between military headquarters and field units. It was very dangerous work, and it was primarily done by young women as the men were on the battlefield.


Blackman's acting career began shortly after the war ended, and one of her earliest films was a cute little "romantic comedy" called A Boy, a Girl, and a Bike, 1949. 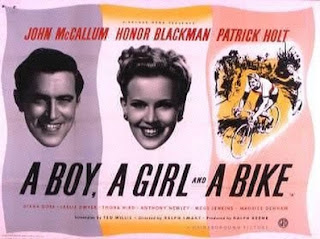 I'm not going to kid you that it was a great film in any way. But it is entertaining, and features the British cycling club-riding scene as a major part of the story. There's lots of footage of riding and racing around the Yorkshire area of England, and the story is decent - if a little under-developed in places.

The film begins with the wealthy David Howarth (John McCallum) - a car-loving jerk who views cyclists as nuisances who "think they own the road" - as he then forces a bunch of them off the road with his car:

Before long, however, he decides that the best way to get to know Susie is to get himself a bike and join the club - which sets up a bit of a love triangle story. Sure, she's been going with Sam for a while, but she doesn't try to resist the attention she's getting from David. The problem is, they're from different worlds. David is from a classy family of blue-bloods, while Susie and Sam are decidedly working class. I won't go too much into it or give it all away, though one could probably guess how things will turn out.

As mentioned, the entire story is set against the backdrop of the club riding scene of the late '40s, and there are numerous shots of riders in the Yorkshire countryside, riding along roads lined by craggy stone walls, and a couple of races between the rival clubs in the area.


One thing I found interesting, from a historical/trivial angle, is that the racing depicted in the film is of the "Continental" style or "massed start" racing, while most club racing in Britain in those days was in the form of time-trialing. What this means is that the clubs depicted in the film (if we were to make the "leap" that this was not just a movie) would have to have been affiliated with the British League of Racing Cyclists (BLRC) which advocated for massed start racing - and put them at odds with the National Cyclist's Union that governed British racing in those days. The Taylor Brothers were among the first to join the BLRC, which got them kicked out of the NCU. Another early advocate for British massed-start racing was Henry Rensch, of the "Paris" bicycle brand (a point that I'll come back to shortly).

As a product of its time, some of the riding footage looks a little goofy by today's standards (No - I'm not being overly critical - one has to just accept these things when watching old movies like this) as the film sometimes switches from decent on-location exterior shots of riders out on the road, to "close-ups" that are clearly done in a studio.


And some of the actors really ham it up while trying to "act" like they're riding - bouncing and flailing all over their bikes:

I mentioned that some aspects of the film's plot are a bit under-developed. One is a fairly interesting sub-plot involving some unscrupulous bike shop owners who run a sideline business as bookies - and coerce a troubled teen into stealing bikes for them to re-sell. That plot line doesn't really get resolved satisfactorily - but it does bring up a fun point for bike-obsessed anoraks:

Being made just a few years after the end of the war, there are a couple of points in the story that demonstrate that Britain was still in recovery. One is that it's mentioned that many goods are still being rationed (in one scene, Susie's father complains that his mother-in-law is taking all his rations for "sweets"). And then there is a plot point involving a member of the Wakeford Wheelers club who is wanted by the police for desertion - a point which literally comes out of nowhere in the final 10 minutes of the film - another one of those "under-developed" elements I mentioned before.

But on the whole, despite whatever flaws it may have as a film, A Boy, a Girl, and a Bike is an enjoyable movie, a good diversion while we're shut in during the pandemic, and a nice showcase for the young Honor Blackman.