Escape With The Kids

We've just wrapped up our third week of sheltering at home and all of us have been feeling bottled up, but especially the retrokids. Not only that, but they've been doing their schoolwork online and in some ways if feels like they're getting more work to do at home than they had when they were in school, so that's been overwhelming. But Saturday we had beautiful sunshine and warm temperatures that lured us outside.

We loaded our bikes up and headed to the national park to ride the canal towpath. It was our first ride together this season. We had no real destination - anyplace we would normally stop to visit is closed - but it felt good for all of us just being outdoors. Apparently a lot of other people were thinking the same thing, as the path seemed almost as busy as it would be on any good weekend - with riders, walkers, and joggers everywhere. In fact, if a person was hoping to get some exercise while still keeping some social distance, it was pretty tough to do. For us, that meant that some of the places where we would normally stop to explore, instead we pedaled on by when we'd see people congregating. Better to just keep moving. 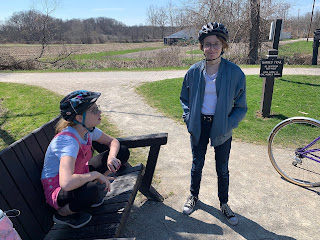 There was one spot where we stopped that was quiet and we could be undisturbed. Riding alongside the old canal, we noticed an area where there were clusters of turtles sunning themselves. It's nice to see that my kids still get a thrill out of spotting animals on our rides together.


It occurred to me that it was almost exactly a year ago that I finished building these bikes for the retrokids, and in the past year they've gotten a lot of enjoyment from them. 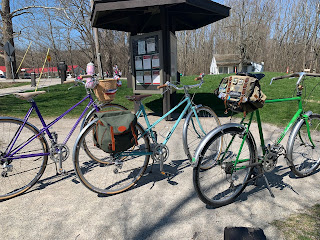 It was great to escape the house to get some fresh air and exercise. The current circumstances make a person appreciate that all the more.
Posted by Brooks at 1:34 PM