New Dura Ace Anticipation - And a Look Back

A lot of the bike blogosphere has been making much of the fact that 2021 marks Shimano's 100th anniversary. Much is also being made of the fact that the company's usual 4-year cycle for major component redesigns was interrupted by the pandemic, so while 2020 might otherwise have marked the introduction of a new version of their top of the line Dura Ace group, many are now salivating at the prospect of a 2021 introduction to go along with the company's anniversary.

Just so we're clear on this, the current iteration of Dura Ace is their 9100 group, which is an 11-speed setup, available in cable-op or electronic shift versions (electronic Di2 is labeled 9150). Since Campagnolo has moved up to 12-speeds, most of the cheerleader blogs are hoping that the next generation Dura Ace (9200, presumably) will also shift 12 cogs in back. And there's a lot of anticipation that the electronic version may even be wireless to go head-to head with SRAM.

By the way, here's the current 9100 rear derailleur: 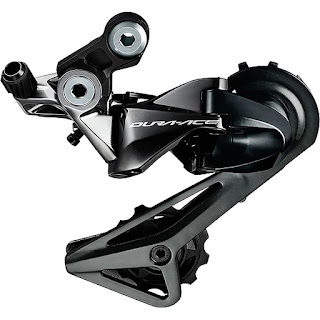 Sorry - but as far as I'm concerned, that thing is just fugly. Yes, it will shift an incredibly wide range for a road racing derailleur, but it hurts my eyes.
In fact, I'd say the same for the whole group: 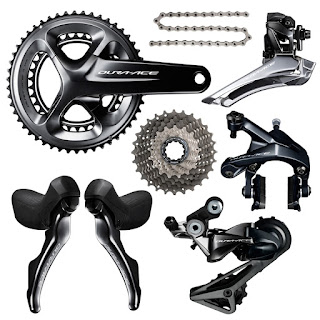 I have no doubt that the new 9200 Dura Ace, if it is indeed introduced in the upcoming months - or whenever it gets released - will work flawlessly. And I also expect it will look similarly hideous.
It really increases my appreciation for the stuff of the past.
It just so happens that I have nearly complete Dura Ace 7400 group from 1984 in my possession. I think it would be impossible to fault the performance of that group. But not only did it work impeccably, it also looked beautiful - crisp, simple, minimalist, and finished with jewelry-like attention to detail.
Here's the rear derailleur: 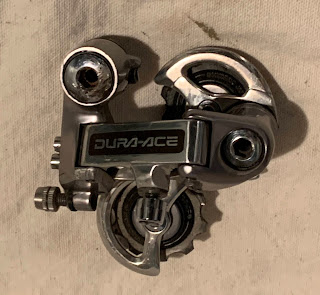 This particular example has just a bit of road rash on it, but overall still holds its own. The logo is unharmed, and functionally it's still perfect. The smooth, but crisp design was cutting edge in 1984, and still looks great today. 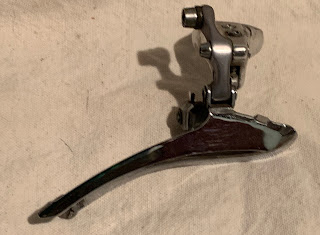 The front derailleur is similarly sleek, compact, and minimalist. 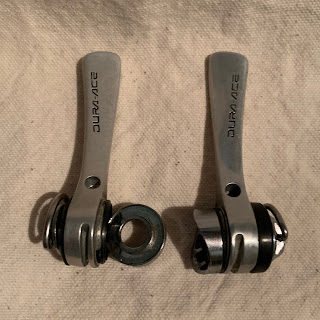 The shift levers are simple and smooth - but the thing that made them revolutionary was hidden inside. The clicking detents in the right lever were the heart of the SIS (Shimano Indexing System) that upended the industry. These are the original 7400 - 6-speed version, and could be switched to normal "friction" mode in the event one needed it. 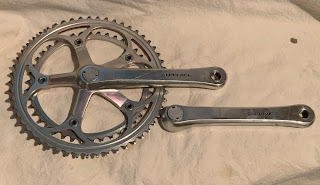 The crank had that same crisp-edged aesthetic. It was smooth and low profile - without being overtly "aero." It was almost as though Shimano was doing a complete about-face after their less-than-successful aerodynamic Dura-Ace AX group.

The brakes were a sleek design - and were about as good as single-pivot sidepull brakes would ever get. Only available in short reach, as far as I know. If one needed a longer-reach brake, the 600 brake (most readers probably remember that 600 was later renamed "Ultegra") from that time looked similar, and were available in a 55mm reach version.

The pedals retained some of the aerodynamic styling of the 7300 AX group, but without the bizarre "Dyna Drive" innovation with its oversized spindle (which required a similarly oversized pedal hole in the crank). These had a low-profile design that allowed for more cornering clearance - not that pedaling through corners is really a recommended practice, but tell that to criterium racers in the '80s. The design would have been welcome on track bikes, too. One issue I have with the pedals is that the toe clips are yet another "does not play well with others" example from Shimano, as they are a unique design meant to integrate with the pedal. Also, there was an attempt to make a unique Shimano shoe cleat that would also integrate with the pedals and clips. The toe clips have little "wings" that would interloc with matching "wings" on the leading edge of the shoe cleat, with the intent being to make a more "positive" attachment to the pedals. All of that was rendered obsolete when Shimano embraced clipless pedals a couple of years later. But good luck finding either the special toe clips or cleats today. (luckily, the pedals do work with common non-Shimano slotted cleats - or with flat-bottomed shoes, but it's less than optimal).
Though I didn't take a photo to post, I also have a nice pair of wheels with the appropriate Dura Ace hubs (freewheel, not cassette) and the correct Dura Ace seatpost. In fact, I think the only thing I don't have is the headset.
Here's a scan of one of the ads explaining SIS, from early 1985: 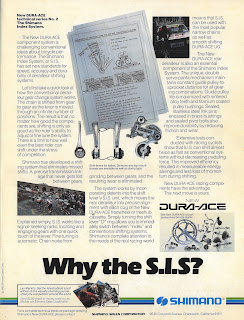 Funny thing is that even as a teenager in 1984, I was already showing serious retrogrouchy tendencies. I remember reading all the hype about indexed shifting, and all I could think was "who needs that?" and dismissing it as a fad. Keep in mind that in 1984, I was still very much a SunTour guy. One thing that the ads and articles about SIS never mentioned was that one of the key elements of the new Dura Ace derailleur design was taken straight from SunTour, whose slant-parallelogram patent had just expired.
Another thing about indexed shifting that made me skeptical was that I knew it wasn't really "new." Shimano had several versions of their Positron system which brought indexing to low end entry level bikes and never caught on. Even SunTour had an early indexed shifting system called "Mighty Click" which failed to catch on. In fact, click shifting systems actually can be found all the way back to the beginning of multi-gear bicycles. But unlike Positron and most other indexing attempts, Dura Ace was a top-level group aimed at pros and serious racers - which brought that "trickle down" appeal (unlike the economy, "trickle down" does actually work in marketing bicycle components). And the engineering of the design - as a whole drivetrain system - was what really transformed things.
Other attempts to create indexed shifting usually focused on either the shift lever, or the derailleur - either one having precise detents built into their mechanism. But SIS integrated the whole drivetrain and shifting system. It wasn't just the clicking levers. It was about optimising the chain, the profile and spacing of the sprockets, the movement of the derailleur in each gear position, and even the cables and housing. As the competition tried to answer with their own indexing systems (SunTour's Accushift, and Campagnolo's Synchro) that full-system integration was the stumbling block they had to overcome. And by the time the competition figured that out, Shimano was working on integrating even more of the bicycle's components.
Okay - so was this all a good thing for the industry? From a retrogrouchy perspective, probably not, as that increased specialization and integration came at the expense of simplicity and compatibility - and ushered in an industry-wide race to obsolescence. But to be fair, the precision that made this Dura Ace group work so well gradually filtered down the line to more cost-conscious component levels to the point that even an entry level bike will function like a top-of-the-line machine -- and for the general bike-buying public, that's probably a good thing.
I remember all the "excitement" among my college bike club friends when SIS made its way to the second-tier 600 group, then later 105, and so on. The whole time, as more and more of my friends were clicking, I saw no reason to jump on the bandwagon. It's funny when I think back on it, but I didn't get a bike with click shifting until my Rivendell in 2001 (20 years ago!), which I built up with Ultegra 9-speed and bar-end shifters -- which by that time was more than 10 years after everyone else had moved on to STI integrated brake/shift levers. Even now, while my main commuting bike has STI, and I have a very nice retro-mod Mercian with Campagnolo Ergo, I still do a lot of my riding on bikes with traditional friction shifting.
I don't currently have a project bike in mind for that 1984 Dura Ace group. But if I do end up using it someday, I still like to think that I might substitute some old Simplex retrofriction shift levers just to be contrary.
Once a retrogrouch, always a retrogrouch.
Posted by Brooks at 10:21 AM