After several days of non-stop rain, our Memorial Day Monday turned out to be a perfect day for a bike ride. Brilliant sunshine, low humidity, and temperatures in the upper 60s. The RetroKids and I took our bikes to the canal towpath, but instead of heading north through the national park as we often do, we decided to take the somewhat less-traveled part of the path that passes through downtown Akron and southward out of the city.

One of the cool things about this section of the towpath is that it gives a person a glimpse at the industrial roots of the city, as it passes between the old Ohio & Erie Canal and the former rubber factories of the city's heyday. It's a good place to go with a camera, too, as there are great contrasts with the rusting iron structures, stone and brick masonry, burgeoning greenery, and occasional bursts of urban art/graffiti. 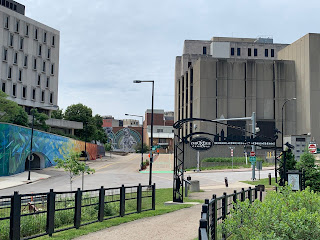 After a long uphill climb, and crossing a bridge over the city's old (and now mostly defunct) interbelt, the path comes into the downtown landscape - which was dead quiet today for the holiday. 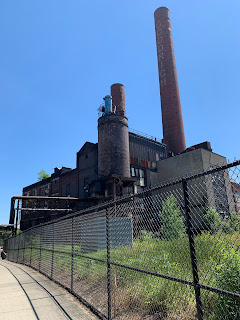 A view of what had once been one of the factories for the B.F. Goodrich Tire Co. - One of many factories that made Akron the center of the North American tire and rubber industry. B.F. Goodrich, Goodyear, Firestone and more all called Akron their home. Only Goodyear remains headquartered in the city, but most of the factories are closed. 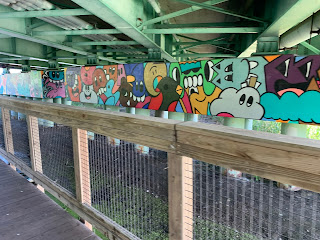 Colorful urban art where the path passes under one of the city streets. 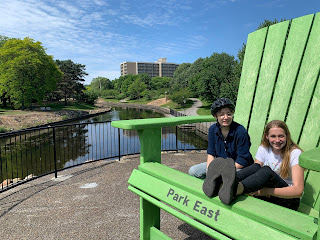 One of several giant-sized Adirondack chairs placed along the path, overlooking the canal. 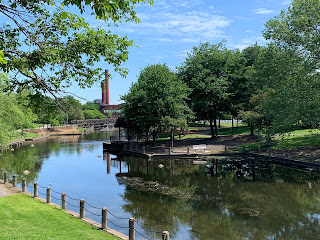 An urban park on the edge of downtown, with the canal as its centerpiece - and another glimpse of the old B.F. Goodrich factory. 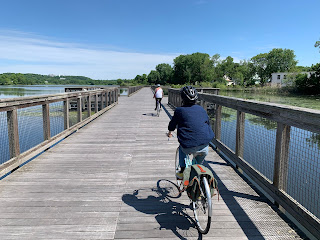 South of downtown, a floating boardwalk carries riders over Summit Lake -- once the site of an amusement park featuring a rollercoaster, ferris wheel, a dance hall, an enormous swimming pool, and other attractions. It was known as Akron's Coney Island. All of that's gone now. 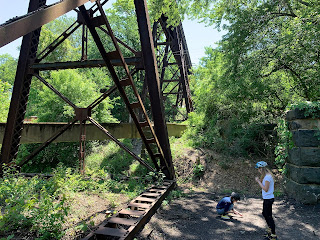 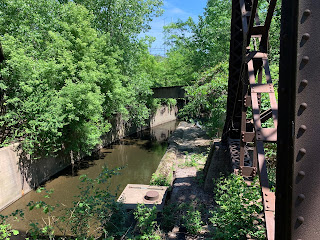 Here was a cool spot under a railway trestle, beside the remains of one of the old canal locks.
And, some pictures of the bikes: 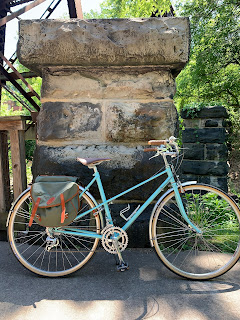 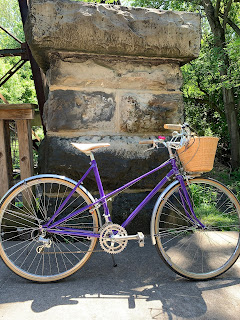 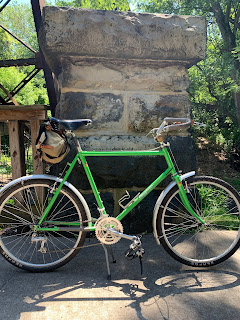 Not a whole lot more to say. It's just still my favorite way to spend time with my kids, and I can't overstate how much it means that they still enjoy getting out to explore things on their bikes.
Whether you get out on a bike or not, wherever you are, I hope you're having a good holiday with someone you love.
Posted by Brooks at 1:54 PM