Anyone who reads this blog with any regularity knows that I am fortunate to live near, and to be able to do a lot of my riding in and around the Cuyahoga Valley - with its national park and variety of county metroparks. Between the canal towpath, a rails-to-trails path, a couple of mountain bike trails, and a network of roads into, around, and through the valley, the local area is a Mecca for NE Ohio cyclists.

In the southern part of the valley (that is, the Akron end), there are two main roads that run along the valley floor, roughly parallel to one another, beside the east and west banks of the river, with several roads connecting them along the way. From Akron to the little town of Peninsula, which is right in the heart of the national park, those roads form the backbone of most out-and-back riding loops.

Due to erosion problems on the eastern bank of the river, one of these two valley roads has been closed since winter - and I should add, closed indefinitely. Hopefully there is a plan to mitigate the erosion issues where the river comes close to the road, and then reopen it. But so far, I haven't heard any specifics regarding a plan, or any kind of timeline for completion. At least one sign I saw literally says "closed until ?"

The good news for cyclists is that, despite signs clearly indicating no cyclists or even pedestrians allowed, it's a simple matter to get around the barricades and ride a couple of car-free miles. The closure probably hasn't stopped hikers or joggers, either. Is it legal? Hell if I know - but I was riding through the closed section on Saturday and saw a park ranger who didn't say a word as I went by. It's probably not worth the trouble to stop us - and there's no immediate danger, so why bother?

This isn't the only closed road in the valley these days.

The northern end of this same road - the end that offered a long, steep climb out of the valley - has been closed for roughly 20 years now. That end of the road was closed permanently and allowed to "go back to nature." I and many other cyclists continued to ride that section of road for a lot of years and observe it as it was gradually reclaimed by plant life. Over the years, as the pavement disintegrated, it became increasingly difficult to ride, and the last time I tried exploring it, I ended up finishing on foot - the former road was virtually indistinguishable from the surrounding woods.

Another road in the valley was closed a couple of years ago - that road formed part of a loop around Hale Farm & Village (a local living-history village/museum) and an old covered bridge that has appeared in photos here on the blog a few times. It also included another long and challenging climb out of the valley if one were so inclined. That road was closed permanently, as the county officials decided they no longer wanted to maintain it. Local cycling clubs petitioned to keep it open - at least for use by cyclists and hikers - to no avail. Again, the barricades and signs don't keep us out, but the road is degrading noticeably. Grass is protruding from the many cracks in the pavement, which leads to more and bigger cracks, and more crumbling asphalt. I still ride it regularly. The red Mercian pictured above with its 25 mm tires works okay, but I'm finding that bikes with fatter tires are becoming more desirable. The Sequoia (32 mm tires) the Rivendell (33.3 mm) and the Motobecane (650B - 37 mm) all feel more reassuring where the pavement is crumbling. 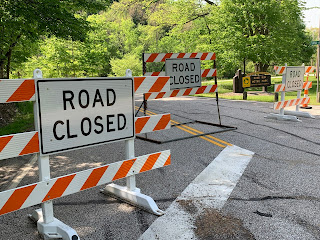 Still another closed road sits right on the edge of the valley, in one of the metroparks, and which also happens to be one of the connectors between the two main valley roads. Locals have been used to this one being closed temporarily for a few weeks every year due to -- (wait for it) -- salamander migration. That's right. Apparently there is some rare salamander that lives in this part of the metropark, and for a few weeks every spring, they have some kind of mating migration from the marshy areas on one side of the park road to the marshy areas on other side of the road. There's probably a bad joke in there somewhere (Why did the salamander cross the road?) For the last couple of years the road has been closed - at least to the cars - more or less permanently. I don't know if the park service has any plans to reopen it someday, but the joggers and cyclists have no complaints about the closure. It's actually nice to have some car-free roads in a park like this one, and the inconvenience to drivers is minimal.

The closed roads do make for quiet, more secluded riding experiences, and offer some variety on rides through the valley. Nevertheless, I'm hoping the latest closure is only a temporary one.