If you want to kill someone - and get away with it - it would be hard to find a better way to do it than to get the person on a bike and run them down with your car.

Maybe so - but statistically speaking, it's very unlikely that a driver who injures or kills a cyclist will face any jail time, and in many cases may not even be charged with a crime.

There's a pretty egregious case of this brewing currently in Texas - where a teenaged driver of a big modified diesel pickup truck ran over about six cyclists while attempting to harass them by "rolling coal." For those not familiar, "rolling coal" is what they call it when these neanderthals modify their diesel pickups to spew noxious black clouds of smoke on demand, and they typically do it to their perceived "enemies" on the road, including Prius drivers, suspected "libs," and (of course) cyclists.

I had a brief article about it some years back, including a cartoon of sorts: 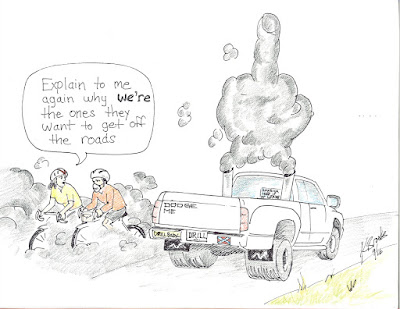 In this case in Texas, the 16 year old driver came up on a group of cyclists who were out on a training ride, pulled alongside of them, then hit the gas to drown them in his smoke. According to witnesses, he'd run down at least three of them before even attempting to brake. Several of the riders had to be life-flighted to the hospital with serious injuries, ranging from broken vertebrae, collarbones, hands and wrists, as well as brain injuries, cuts, bruises, and road rash. Many of them required surgery. Thankfully none of them died, but there's no question that they all have a long hard recovery ahead of them - both physically, and psychologically.
The teenaged driver's parents showed up at the scene, the boy was questioned by police - and then let go. This happened on September 25th - and as of today the boy still has not been charged with anything. The district attorney of Waller County, where the crash occurred, has insinuated that the police have mishandled the case and may have given special treatment to the driver because of his well-connected family's prominence in the community. The police chief denies any special treatment, but local cyclists claim that there is a long history of animosity towards cyclists by courts and law enforcement. The story is still being covered by Houston area news, and recently made it into Bicycling Magazine as well. (Links to Houston Chronicle, Bicycling)
Stories like this one just drive home the point that cyclists are frequently marginalized - and targeted - and that justice can be hard to come by.
A friend of mine used to say that it was not enough to assume that drivers might be inattentive, inexperienced, or clueless - he just took it for granted that drivers were actively trying to kill him - and rode his bike accordingly. I used to chuckle at that advice - but these days I can't help but consider them wise words.
Posted by Brooks at 12:08 PM