Well, I finished my test period on the Brooks B-17 Imperial, or "Carved" saddle. I'd put several thousand miles on the saddle in that time, but when the year-long test period was over, I was actually glad to swap the saddle on my commuting mule. I took it off and replaced it with the Brooks C-17 I had been using previously, and it was a relief. 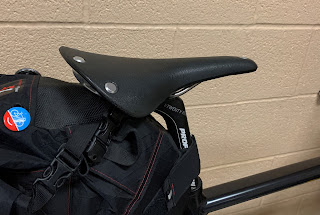 The C-17 saddle's top is made of rubber and fabric bonded together. Its look is somewhat more "modern" than the B-17, but the "feel" is similar. I find that it more or less "disappears" under me, like a good traditional B-17 (without the big hole in the top). I chose it for my commuter because it is more of an "all weather" saddle - more impervious to occasional rain showers.

The "carved" B-17 Imperial is supposed to relieve perineal pressure, but I hate to admit that I never got used to it. If anything, I felt that the big hole in the top led to more pressure - not less - and chafing. Even with padded riding shorts, I could feel the edges of the hole "digging in." I had hoped that it might get better as the saddle got more broken-in, but the sensation never really went away.

If someone is still tempted to try the Imperial, I'd recommend taking out the laces right from the start. Unlike regular versions of the B-17, the lower skirts on the Imperial are laced together from the factory, which is a trick people will use to firm up the top of an old saddle that has gotten too soft and saggy. But on a new saddle, it seemed to be overkill. I used mine as it was shipped, with the laces, for at least 6 months, and it made the top feel way too solid, as if it would never break-in. I eventually removed the laces, which allowed the top to flex more. It helped, but I could still feel that damned hole.

In the end, I'm just going to say that the regular non-carved B-17 - and also the C-17 (which has a similar width to its all-leather cousin) - are pretty hard to beat. Even if someone has concerns about "perineal pressure" I think these saddles - if properly set up for height and angle, etc. - will provide a lot of comfort, making the huge hole in the top unnecessary.