Jobst Brandt: Loss of an Icon

Jobst Brandt, a tremendously influential person to the cycling world, died this week, on Tuesday, May 5th, at the age of 80.

A mechanical engineer with impressive credentials (Porsche, Hewlett Packard, Stanford Linear Accelerator), he was something of an outsider to the bicycling industry, which allowed him to speak freely about tech issues and other problems he observed. He could be very outspoken. But he did contribute to the industry in numerous ways, and particularly through his work with Avocet, where he helped to develop their "slick" tread tires (they were dubbed Fasgrip, and they were good) as well as their cycling computer (the first, last, and only computer I ever used on a bike).
To cyclists on the West Coast, the rides he led around the Bay Area -- known as "Jobst Rides"-- were legendary. Usually 100 miles or more, and covering all kinds of terrain, the rides left many seasoned riders struggling and gasping. Reportedly he thought nothing of going down steep, rocky trails on his huge 27-in. road bike (the guy was 6' 6") with road tires, and few could keep up. He was also known for his regular tours of the Alps, which were typically well-documented in ride reports with plenty of breathtaking photos. (see HERE)

Many other cyclists around the country and around the world got to feel as though they knew Jobst, even if they never met him, through his writing and his frequent contributions to the once-thriving Usenet group rec.bicycles.tech. I was one of those who never met Jobst, at least not in person, but I did have occasional email conversations with him on tech issues, and I was always amazed at how quickly and thoroughly he responded to my messages and questions, despite what I'm sure was a very busy schedule. I really wish I could have have gotten his take on the Campagnolo Ultra-Torque issue (or non-issue, depending on whom you believe) that I wrote about recently, but I have a feeling he'd have seen a shortcoming in that design. Many of Jobst's old posts to the Usenet are archived and can be found HERE or HERE.

Jobst had a rare quality (I believe) as a mechanical engineer in that he not only had an incredible understanding of engineering and mechanical principles, but he also had an uncanny ability to explain them clearly to non-engineers with his commanding use of the English language. It's a testament to his writing ability that one of his jobs for Porsche was to translate their technical manuals into English -- a job he practically created himself because he was dissatisfied with the manuals as they were. 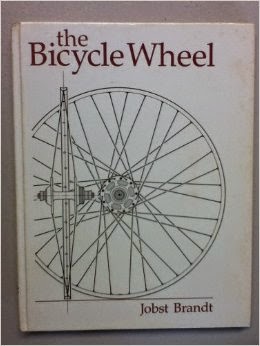 Another testament to his ability to put his engineering knowledge into clear instruction is his book The Bicycle Wheel, which many consider to be the Bible of the subject. Although one could use the book simply as a reference guide for building a wheel, it is actually much more. I've read the book cover-to-cover (twice) and won't build a wheel without reviewing it.

I don't know if it would be appropriate to call Jobst Brandt a retrogrouch (though I'm certain people did), and I don't know how he would have felt to be labeled as such. But I do know that many a self-proclaimed retrogrouch felt a kinship with him, and interpreted his views as testament to the cause. For one thing, like a good engineer, he took a conservative approach to new technology, was fiercely dismissive of marketing hyperbole, and generally favored designs that were simple, proven, and cost-effective.

Right after learning about his death, I pulled out an interview Jobst gave with Grant Petersen for the Rivendell Reader (RR-6). In it, he talked about such topics as . . .

"Most of the MTB's I see are not ridden anywhere where they have an advantage. Tourists who never ride in mud ride thousands of miles on knobby tires and in a riding position that is inefficient for road riding."

"It is the poseurs who have seriously damaged the road bike, with their attention to unobtanium, 27-speed gearing and disc wheels, none of which has anything to do with bicycle riding."

"Excuses such as 'quick steering' and 'responsive' are used to cover the quirky handling of these bicycles."

He sometimes ruffled feathers. He sometimes left people stinging when they made claims they couldn't support with facts and evidence. "He didn't suffer fools" was something I've heard many people say.

Back in January 2011 (I've read that it was on his 76th birthday), Jobst Brandt was injured in a bicycle crash that, combined with other issues, left him debilitated. It isn't clear what happened, but it appeared to have been a single-bicycle accident. Though some helmet proselytizers would have wanted to use the accident as more evidence supporting helmet use, Brandt, who was well known not to wear one and an outspoken critic against the near-religious fervor that surrounds them, would certainly have chafed at that. Reportedly, it was a stroke he suffered while in the hospital, rather than the crash, that left him unable to write any more. It seemed like such a loss then, made all the more permanent and real now.

Between Sheldon Brown in 2008, and now Jobst Brandt, I feel like I've lost two of my icons.
Posted by Brooks at 7:19 PM