As I make my way along the road to work, I am inevitably the only one on a bicycle for the whole 13-mile stretch from Akron to Medina. My morning commute takes me from the urban streets of Akron, through suburban shopping plazas, fast food chains, and malls of Fairlawn and Bath, and eventually out to the rural spaces of Medina County. I mostly stick to OH-18, which is the main thoroughfare between Akron and its somewhat quaint, smaller neighbor to the west.

I like to be heading out the door by 6:00 am, when traffic is still very light. It's dark when I leave, though now that it's May, it is light by the time I arrive at work. I do have to negotiate the Interstate 77 interchange, which can be a little dodgy by the time I get to it, and then the remainder of the way, OH-18 becomes practically like a freeway, but there's an extra-wide shoulder, and I just get over to the far right and let the traffic go by until I turn off on a near-deserted farm-country backroad. I'm normally a "take the lane" rider, but when the traffic is flying by at 55 mph, I figure they can keep it. In the afternoon, for the ride home, there is a lot more traffic on the main road, so I take a different route -- choosing backroads over the main thoroughfare. It adds a couple of miles and a bunch more hills, but I'm less pressed for time, and I feel a little more comfortable.

As I said, I'm usually the only cyclist on the road at that time. But this day, some weeks ago, as looked ahead, I thought maybe I saw a faint flash of red in the distance. Maybe I was mistaken, or I misinterpreted a car taillight. A little later, I saw it again. Flashing red. A bike taillight for sure. Another commuter? 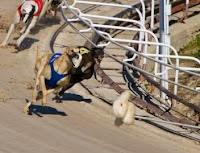 I hate to admit it, but I'm a bit of a Cat. 6-er when it comes to seeing other cyclists on the road ahead, even though it never happens on my morning commute. Despite my consciously telling myself to ignore the rider down the road, subconsciously the other rider often becomes like the rabbit in a dog race, and I start pedaling a little harder. Whether it was due to a little extra Cat. 6 effort, or I was just naturally pushing a faster pace, I could see that I was gradually closing the distance between myself and the other commuter. As I got closer, I could begin to see the commuting-cyclist "uniform": day-glo yellow vest, reflective accents, flashing beacons.

Who was this guy? Where was he headed? Why haven't I ever seen him before?

Crossing the county line, I was within about 100 yards behind him, and closing. 50 yards. 20 yards. Just as I made it up to within a couple bike lengths behind has back wheel, I got to my turn off the main route and on to the back road while he continued going straight. I didn't even manage a decent "g'morning." 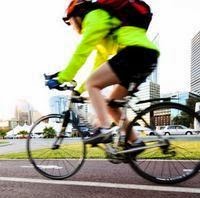 It just happened the one time, and I haven't seen him since. Was he just trying out bike commuting for the first time, and decided it wasn't his thing? Was he only cycling to work because his car was in the shop? Or does he ride regularly, and maybe I just caught him on an odd day when he was out at something other than his usual time? Who knows.

It's National Bike To Work Day, but around here it's hard to tell. Aside from this one little chance encounter, from what I can see around my area I'm usually the only bike on the road.
Posted by Brooks at 7:36 AM