How hard is it to not lose a key? Or to find your bike after you've parked it? Are bike locks really such hassle that tech startups have to keep reinventing them?

The latest is the Noke U-Lock, from FŪZ, which promises to eliminate "the hassle and frustration of lost keys and forgotten combinations."

The U-lock is a follow-up product from the company's Noke Padlock which was fully funded on Kickstarter. The U-lock had a similarly successful funding campaign -- which means there are a lot of people out there who are apparently too inept to use a key. Either that, or they are so dependent on their smart phones that they can't imagine performing any task, no matter how simple or mundane, without the use of some app.

Like other "smart" locks out there, the Noke works with Bluetooth smartphones. It requires a battery that needs to be recharged from time to time. The maker points out that a charge will last a long, long time -- but does that really matter if someone fails to keep it charged adequately and ends up with an un-openable lump of hardened steel holding their bike to a rack somewhere? Actually, shouldn't happen since the lock also allows a user to create a "custom access code" so the lock can be opened without the phone, or if the battery dies. Do you know another way to say "custom access code"? Lock Combination. Which kind of negates the whole point about eliminating the "hassle and frustration of lost keys and forgotten combinations." If someone can't remember their phone, or to keep their lock charged up, how are they going to remember the combination?

Check out some of the other features:

Anti-theft alarm. "When a would-be intruder shakes your Noke for more than 3 seconds, a shrieking alarm goes off. This will definitely send him running and get the attention of anyone within about 50 meters."  Ummm . . . yeah. Have you ever noticed how people react to a car alarm that goes off in the night? Now imagine their reaction to a screeching bike lock.

Sharing. "We know you love to share your bike" (Not me. Who are they talking about?). The Noke app makes it safe and easy. You can give one-time access, or custom access based on specific days and times." Who does this? Are there a lot of people out there with a bunch of freeloading friends who are too cheap to get their own bikes? Are people running their own, personal bike-share systems?

GPS Tracking. "Maybe you forgot where you locked your bike. With the Noke app, it's no problem. Each time you lock the Noke U-Lock, it is marked so you can always find your bike." 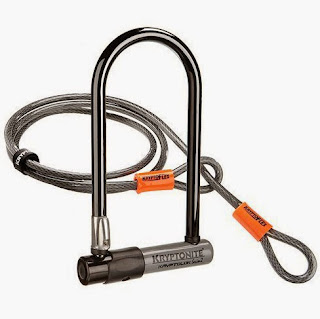 Now I get it. People who can't use a key or remember a combination also can't remember where they left their bike locked up. Of course, if they're that hopeless, how are they able to ride a bike? Or perform their jobs? Or simply function in the world?

Retail price for the Noke U-Lock is about $130. Or for about $50, you can get a basic Kryptonite with an extra cable which will work at least as well (or better if you consider the ability to easily lock up the wheels) in most situations outside of NYC. Yes, you have to keep the key. Is that so hard, considering we still have keys for our homes, cars, maybe work? Besides, if someone can't remember where they locked their bike, they probably can't find their way home either.
Posted by Brooks at 12:16 PM