Almost two years ago, I posted about a recurring incident that would happen on my morning ride to work (Share the Road?). There was this woman who would come up behind me in her car and blast her horn at me, startling me completely, then she'd pass me in the wide-open left lane, laying on her horn the whole way past. There was no reason whatsoever for her actions -- there was no traffic. She'd have the whole road to pass without having to wait or slow down at all. It was obvious that her horn was her way of telling me that, as far as she was concerned, I have no right to be there.

For two years I've been trying to catch this lady. I could never get her license plate. I could never notice her coming until it was too late. The traffic lights were never in my favor that I could catch her. But last week, it finally happened. Last week, as I was riding along, she came up behind me as usual, honking her horn -- but this time she did it when she was less than a half-mile from where she works. I could see clearly where she pulled into the parking lot. 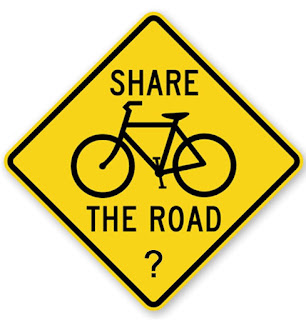 Oh My God, I've Got Her! I said out loud to nobody who could hear me.

My heart pumping and my legs racing, I pulled into the same parking lot. My eyes were scanning for her car. I saw her on the other end of the lot, heading for a parking spot, and I cut across the lot so that I pulled up to her just as she was pulling to a stop.

It's hard to sound calm and relaxed when you're half out of breath and your blood is pumping not just from exertion but anger. As she sat in her car with the windows closed, I yelled at her, "Lady - you've got no business honking at me! I have the same right to the road you do. If you want to go by me, then just go around!" I think I might also have told her where she could shove her horn.

She rolled down her window. "Can I speak now?" she asked.

She then went on to say "I should not have to slow down to a crawl to get by you. You don't have the right to slow down traffic."

I went on to point out that I was on the far right side of the road, and that she had the full left lane and most of the right lane to use for passing - That there was no traffic - That she didn't have to slow down even a second to get by me - as evidenced by the fact that she used the left lane to pass me even as she was blowing her horn. On the other hand, I did not point out that my bike was probably worth more than her piece-of-crap car, even though that's probably also true.

She said she only honked at me two times. I told her that it was "only" two times this month (absolutely true), but I'd been watching for her for the past two years. I told her I considered her actions to be harassment and intimidation, then I took a picture of her license plate and told her I'd be reporting her to the police - then went back on my way to work feeling totally pumped.

Yes, I called the police later that day. Just as I'd suspected, they told me that there's nothing they can do unless an officer witnesses it. Yeah -- that'll happen. Granted, I knew they weren't going to write her a ticket or anything based on my say-so, but I hoped they might at least send her a letter to notify that a complaint had been registered against her. No dice.

Doesn't matter though. I have a feeling that just being confronted, and knowing that I now know where she works, I think she's re-thinking her actions. I've actually seen her twice since then, and she hasn't made a sound. Yesterday, she was stopped next to me at a light (why didn't that ever happen before?!) and I swear I thought she was going to blow off the light just so she could get away from me. She didn't do that, but did take off in a hurry when the light turned green, though.

On A Different Note:

Also yesterday on that morning commute, I had a very different encounter.

As I stopped for another traffic light, a car pulled next to me, and the window buzzed down. I braced myself for another dose of verbal abuse.

"Excuse me," said a little grand-motherly lady, "are you riding your bike to work?"

I told her I was.

"Well God bless 'ya," she repeated. Then the light changed and she waved as she drove off.