Ever check out Gear Patrol? I usually don't, as it is a website/online magazine that's mostly aimed at an economic demographic that pretty much eats people like me for lunch.

But the other day, it was called to my attention that I should check out the site. And there, amid articles about hyper-expensive exotic cars and motorcycles, expedition watches, and brandy -- all priced for the top 1% -- I saw this article about steel bicycles: 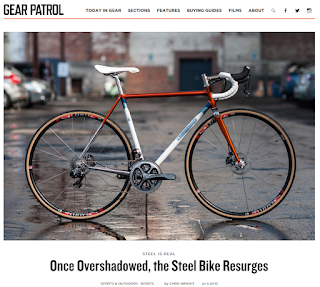 The bicycle pictured at the top of the article was built by Chris Bishop, who is one of a new generation of very talented framebuilders working today. Though the bike shown has some very non-retrogrouchy features (electronic shifting, disc brakes, and a straight fork), it's an awfully nice bike -- and it's lovingly built in steel.

The GP article quotes Bradley Woehl, the owner of American Cyclery in San Francisco, as well as former racer Andy Hampsten, who now heads Hampsten Cycles, which offers most of their models in steel (though generally designed and built for non-retrogrouches). The article talks about how steel was displaced, briefly, by aluminum in the '90s, then carbon fiber started taking over by the end of that decade. OK - nothing most of us don't already know. What's cool is to see an article about latest and greatest trends saying something like this:

"But where these newer materials excel at traits necessary for speed in racing like lightness and stiffness, they have major shortcomings in characteristics important for everyday riders, like comfort, toughness, and cost-effectiveness."

American Cyclery's Woehl adds, "When aluminum came along, it was lighter and stiffer than steel, which, if you're a good hill climber, you need that out of your bike. If you're just riding to work, the coffee shop, or even a bike tour down the coast, not so much."

The article describes a perceived shift in priorities that may be leading to renewed interest in steel as a building material. "Utilitarian bikes for everyday riding and bike touring; high-end custom frames from big-name bike builders; and even classic bike races that mix romanticism with reality. This shift of the gears has been a good one for cycling. Bike commuting has increased by 46 percent in America since 2005, and as that boom continues today, steel's influence on cycling's identity is rising."


Some other excerpts that might resonate with Retrogrouch readers:

"The steel bike rides better, it lasts longer, it ages more gracefully, and it's a more practical thing," Woehl says. . . "They're heavier than aluminum and carbon fiber" but "the extra weight of steel versus aluminum or carbon fiber isn't a deal breaker for most amateur riders who, unlike pro racers, don't need to shed every possible ounce of weight in order to keep up with the peloton. And unlike carbon fiber bikes, steel frames are being custom made around the country without reaching astronomical price tags."

That last part can be true, though it's also just as true that one can easily spend just as much on a custom-built steel frame as they would on a carbon fiber one. Though some of us would argue that they'd be getting much more bike for their money.

There are some elements in the article that I believe are a bit over-simplified. For one, there was this quote: "An aluminum bike has a really harsh ride quality -- it's stiff and unforgiving. Every little pebble you run over in an aluminum bike, you feel that bump."  Such a statement can often be supported by looking at most of the aluminum bikes that have been on the market over the years - built with over-sized tubing to compensate (usually over-compensate) for that material's lack of stiffness as compared to steel. But the harsh ride quality is more a product of design and construction than it is of the material itself. I've ridden some old Vitus aluminum frames with their 1-in. to 1 1/8-in. diameter tubes and found them to be quite comfy. Granted, I still greatly prefer steel as a frame material, but it's important to understand the differences.

The sidebar titled "What to Look For," is similarly simplified. I guess the gear-heads who worship the latest equipment are only expected to be able to afford it, not fully understand it.

"Steel is versatile, strong and relatively affordable -- but its popularity has also spawned shoddy versions not worth their cost. . . Start by checking the grade of the steel . . . Chromoly is a safe bet, as is higher-grade steel like Reynolds 853. . . Classic steel frames and higher-end models often use lugged construction or fillet brazing, both of which are beautiful but expensive. The more modern construction uses stronger TIG weld, which works just fine."

Reynolds 853 is a "safe bet"? That's pretty high-end stuff -- and not likely found on junk frames. And regular readers of this blog know how much I love lugged construction, but there are some relatively inexpensive lugged frames built in automated factories these days. It's true, I don't know of many (or any) inexpensive fillet-brazed frames. What about TIG welding? Is it really stronger? All three construction methods, if done right, will result in frame joints that are stronger than the steel tubing itself, so a statement like that could really use some clarification. TIG welding is a lot more common these days, too -- but it isn't necessarily any less expensive. Most low-cost mass-produced steel frames are TIG welded today, but a lot of super expensive high-end and custom-built frames are welded, too.

With so much hype about the latest carbon fiber wűnderbikes, and pushing the envelope in search of the lightest and fastest bike possible, it's almost a shock to see an article like this one extolling the virtues of a steel bike as though it might be the latest thing. But no doubt, if a person is looking for a bike to be a long-time riding companion, and want a bike that is more versatile - capable of more than just go-fast racer-wannabe riding - then chances are, that person is going to get the most bike for the money in steel. It's just surprising to see others coming around to that.
Posted by Brooks at 11:38 AM