The Latest Solution to Creaking Press-Fit Bottom Brackets Is . . .

No kidding. The bike industry is all abuzz with the release of another new bottom bracket standard -- one that may actually solve the issues of sloppy-fitting, creaking press-fit bottom brackets for good. And it comes in the form of a threaded bottom bracket.

Eureka! Why didn't anyone ever think of this before?!

Oh yeah -- I did, though I couldn't possibly have been the only one. I even came up with a catchy trademark-able name for mine: ThreadTech.

The new standard, created jointly by Chris King and Argonaut Cycles, is called T47 (that name represents "threaded - 47mm") although Chris King is calling their product "Thread Fit 30i." It utilizes a bottom bracket shell that is the same basic dimension as a PF30, except that the shell's interface is threaded. Interesting note -- if an existing PF30 shell is made of steel or aluminum, it could theoretically be threaded to accept the new T47 standard. Different cups could easily be machined to fit the T47 shell to accommodate different BB spindle sizes, such as 24mm or 30mm. Thicker or thinner cups could also allow for different spindle lengths, adding to the compatibility with most of today's crank and bottom bracket systems. 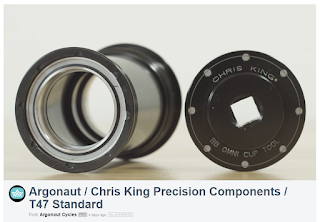 According to Ben Farver of Argonaut, the PF30 system is a popular one that offers good crank compatibility, but tolerance variations between different manufacturers lead to the well-publicized problems that the press-fit systems encounter. Probably inspired by some of the threaded retro-fit systems that have been coming out lately as solutions to press-fit creaking, Farver could see the benefits of a threaded system, like the traditional British-threaded BB (or BSA). But from the standpoint of modern bicycle manufacturers, the smaller diameter of that system has its own drawbacks. "The traditional threaded BSA is great from a durability standpoint, but it limits a customer's crank options," said Farver in a promotional video. "As a frame manufacturer, I don't want to have to talk someone into buying one of my bikes while at the same time talking them out of a crank they might want to use."

Basically, the idea of the T47 is that it combines the reliable interface of traditional threaded bottom brackets with the larger diameter proportions that have become so much more popular in the industry today. Farver said, "I called Jay Sycip, who runs the Cielo arm of Chris King, and we discussed the true consumer benefit of creating a threaded spec that leverages the larger bearing used in the PF30. We agreed that it would yield a much higher interface success rate, and more importantly, a better ride. So this project is an attempt to solve a problem the entire bike industry is suffering from, and lead the way to a better, lasting standard."

It's nice to point out that the T47 is an "open standard" - which means that anyone can use it freely. That speaks well to the possibility that it could be adopted widely around the industry, and restore some meaning to that currently meaningless word "standard."

One could almost get optimistic with a turn of events like this. Then again, it's always possible someone else will come out with a competing standard and consumers will have to sort out which one will last and which will turn out to be another Betamax. This is the bicycle industry we're talking about here, after all.

Nevertheless, I'm going to put my hopes in the "optimistic" side for a change, even if it means that I would eventually run out of things to grouch about.
Posted by Brooks at 12:28 PM