As I posted last month, some people are calling "Plus-Size" the latest and greatest thing to hit mountain bikes. But in a sign that either confirms that to be true, or possibly heralds that the trend has already peaked and will start trailing off soon, one can now buy plus size mountain bikes at WalMart and other big-box retailers. Yep - Huffy now makes plus size. Huffy 3.0.

Huffy seems to have totally embraced plus-size bikes, too, in offering 4 different models in 3 wheel sizes - 26-in., 27.5, and two 29-in. models. I suppose that offering the bikes in 3 different wheel sizes is supposed to make up for the fact that they apparently don't offer different frames sizes. Instead, they seem to be "one size fits most" and the concept of proper bike fit must not be a priority.

Just like department-store fatbikes, it's practically a given that most of the Huffy 3.0 bikes that get sold will be ridden primarily on pavement, where their mid-fat tires will be more or less unnecessary. Still, that doesn't stop them from proclaiming the benefits of  "better traction," "more momentum" and "less exertion."

To announce the new "3.0" line, Huffy put out a new commercial with the very strange tagline "Be the Motor." 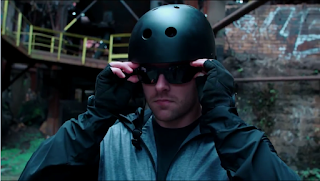 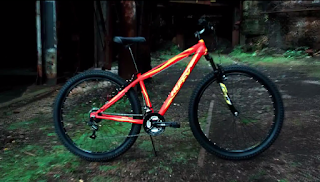 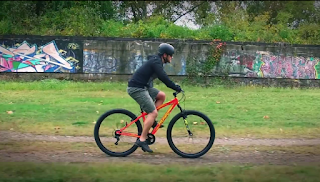 . . . in some kind of post-industrial wasteland: 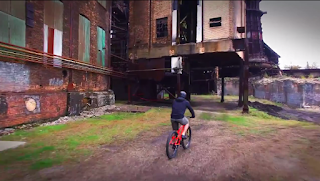 Most of what the guy rides on could easily be handled with a decent road bike with some tire clearance -- like on this path that under most definitions would be described as "paved":

But he does encounter a stray rock:

Oh -- and there's a gratuitously-placed small pile of loose dirt: 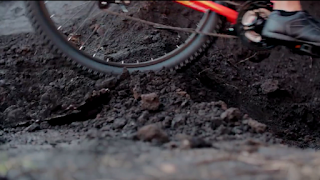 Some unexplained elements include this small man-made "brush fire". . . 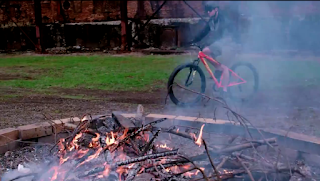 . . . And the weird motorcycle engine sound effects throughout the video:

Does the arrival of department store plus-size bikes mean that the new trend has fully caught on? Or is it about to jump the shark? 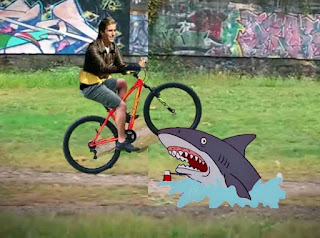 You can watch the Huffy 3.0 commercial right here: