The year was 1985. Bernard Hinault, riding on the latest "clipless" pedals from LOOK, joined an elite group of 5-time Tour de France champions. From that point on, toe-clip pedals became a thing of the past.

I'm not going to go on a total Retrogrouch diatribe against clipless pedals in this post and try to argue breathlessly that toe-clip pedals are better. Clipless pedals are fine. I use them. They have their place. But I still like and use traditional toe-clip pedals for a lot of my riding. There are a lot of situations for which I simply prefer them. I thought I'd take this post to discuss some of the things I like about traditional pedals, and to show some of the pedals I like.

First, with so many choices in clipless pedals, why would anyone but a self-avowed Retrogrouch still use toe-clips? One reason: Versatility. Traditional pedals are simply more versatile than the click-in variety. No special shoes needed. With traditional pedals, whatever you're wearing becomes riding footwear. Sneakers. Casual shoes. Sandals. Whatever. In fact, once one gets past the need to wear special cycling-specific shoes (many of which necessitate the "duck walk"), one pretty quickly realizes they don't really need cycling-specific clothing all the time, either. Speaking for myself, once I got over the need to "suit up" for every ride, I found I started riding a lot more. Trips to the grocery store. Chinese take-out runs. Library. Pharmacy. There are lots of things I used to do with my car that now are another chance to get on my bike.

For rides over about ten miles, at faster than a casual pace, I do of course wear cycling clothes, including shoes. But out of a collection of roughly a dozen bikes, only my "fastest" and most narrowly-focused road bike has clipless pedals. The rest have toe-clips. My main commuting bike has toe-clips, and for my roughly 14 mile commute I wear classic-looking traditional touring cycling shoes that give me the benefit of stiff-soled riding shoes, but also let me walk more or less "normally." I'll wear cycle-specific clothes for the commute, but change into professional wear at work.

Let me show some of the pedals I use and enjoy: 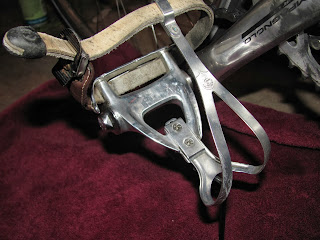 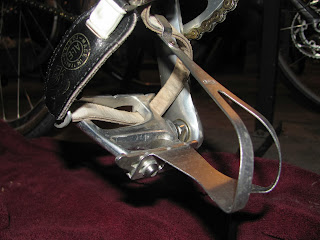 Those last few pedals, I think, show that good quality, traditional pedals are alive and well. Velo-Orange and Soma Fabrications are a couple of good online sources for them, but check the local bike shop, too.

Some people will still wonder why anyone would still use traditional pedals. I hear it all the time: "They don't hold your feet securely." "You won't be able to pull up on the pedals." "They're harder to get in and out of." But I don't see any of these things as issues.

The notion that feet must be attached firmly to pedals is a bit of a myth in most cases. I find that my feet are held more than securely enough with traditional pedals, even with non-cycling shoes. The only time I've ever pulled (or nearly pulled) a foot out of a pedal unintentionally was on a fixed-gear bike going up a hill way too steep for the gear I had, and with the toe straps completely loose. It was a complete tactical error in judgement, and not something that happens in most riding (and my foot still didn't come out, and I still made it up the hill without incident).

Harder to get in and out of? OK, so on one hand people fear the pedals are too easy to pull out of. On the other hand they're too hard to get out of? I actually find traditional pedals just as easy to get into as clipless pedals, maybe even a little easier, but that might be because I use them so much more. It's a different movement than with clipless, but no harder really. The other thing I've found is this: if I'm taking off at a light and have trouble getting into a toe-clip pedal, I can still get myself going well even if my foot isn't properly "in" the pedal. But with clipless pedals, that is much harder to do. The cleat/pedal "target" is much smaller, and if one doesn't get lined up just right, or if the cleat doesn't engage properly, it's really hard to get going without a foot slipping off. Banged up shins are the likely result.

As far as getting a foot out of toe-clip pedals, if one is riding with old-style slotted cleats and cinches the straps down tight, it can be hard to pull a foot out in an emergency -- but how often does that happen? Secondly, it really isn't necessary to tighten the straps that much -- as I've already pointed out, it's a bit of a myth that we need to be so firmly attached to the pedals. If riding in touring-type shoes, and with the straps only semi-tight, getting out of the pedals is no problem at all.

So as I've already pointed out -- I'm not arguing that traditional toe-clip pedals are superior to clipless. I have no problem with clipless pedals in all their various forms and guises. But I still value the versatility of traditional pedals, and I'm really glad that there are still at least a few companies out there who still make good quality toe-clip pedals for road bikes. For a lot of riding -- especially any riding that isn't racing -- traditional pedals are a classy choice that make a bike so much more than an expensive, narrowly focused training device.
Posted by Brooks at 7:00 PM