In Bucking the Trend, I pointed out several new road bikes available today that are more versatile than a lot of the narrowly focused bikes that are just too much influenced by the racing gene. Most of the bikes I mentioned are available as frame sets so they can be built up with sensible and simple components. One other option for riders looking for a classic-style road bike is to actually find a vintage classic-style road bike -- dig something out of the past -- and renovate it.

I've done a few renovations over the years -- taking older bikes that have maybe lost some luster but formed a good base for taking to a new level. Literally, a new birth. There are many bikes from the 70s and 80s that were good bikes in their day, though not particularly valuable or collectible today; bikes that have spent most of their lives in basements and garages; bikes that can be had for next-to-nothing today. Many of these bikes have nicely brazed lugged frames, often made with good quality tubing, and geometry that makes them adaptable to many kinds of riding.

Here is a renovation that I did recently for my wife. The basis was a 1984 Trek 420L mixte, which was one of the lower-priced Treks from that time, but it had a nice lugged frame built from butted manganese alloy steel (Tange Mangaloy). This was good-quality frame tubing, but typically spec'd on less expensive frames than chrome-moly. The Trek was originally designed for 27" wheels, which were common on American-market road bikes in the 80s. It had long-reach centerpull brakes with a fair amount of clearance, even for fenders. The bike was a good basis for a renovation.

First thing one should know is that my wife doesn't ride very often. I did once buy her a nice road bike; one that was supposedly a comfortable "sport-touring" type of bike, but in reality was not as versatile or comfortable as it should have been. Certainly nothing like the "sport touring" bikes of the past. It really didn't suit her needs. It didn't fit tires beyond about 25 mm, the gearing was pretty high (it had a triple crank, but it was what they call a "racing triple" -- she was NEVER going to use that big ring), the bars didn't come up high enough for her comfort, and she just could not get the hang of the STI integrated brake and shift levers. When I found the Trek mixte, I figured I could affordably custom-build her something that would really fit her and the kind of riding she might actually do.

I found the Trek on eBay for only about $200 including shipping. The frame was straight and true, with no damage. The original paint was OK, but not great. To begin the renovation, I stripped all the parts off the frame and took it to a local powder coater. Powder coat is a good choice for a bike like this since it looks good, is durable and inexpensive, and the bike isn't exactly a valuable collectors piece that needs the careful attention to detail that comes with a high-quality (and more expensive) wet paint job. Powder coating a bicycle can often be done for as little as $100 -- including all the prep work. Because there are certain details that make painting bicycles different from painting car wheels and garden furniture, I recommend talking to a few sources in your area for powder coat -- find out how much experience they have with doing bicycles. If the answer you get is "I can coat anything that's metal" you might want to keep looking. Ask local riders and bike shops to see if there is anyone they recommend.

I decided to replace the 27" wheels, which are verging on obsolete (tires are still available, but the choices are shrinking), with the current road bike standard 700c. That opened up a much larger choice and availability for tires. Since 700c wheels are slightly smaller than 27" (622 mm vs. 630 mm), switching also meant increasing tire/fender clearance slightly. I thought of possibly going all the way to 650b wheels (584 mm), but I don't know that this was the best frame for that kind of conversion. The bottom bracket on the frame was already pretty low to begin with, and I wasn't sure I wanted to lower it even more. Also, I was going to need to switch the rear brake to an extra-long reach (75 mm) model to better reach 700c rims, and I wasn't certain that even those extra-long reach brakes would be enough to reach a 650b rim (my measurements said it was going to be awfully close). Clearance for large-volume tires with fenders was going to be pretty good with 700c, so I decided to stick with that.

In the interest of simplicity, I took the triple ring crankset and converted it to a single. I'd have a wide range 7-sp. freewheel on the back wheel. My wife isn't going to be doing any serious hills, and it's hard to beat the simplicity of one shifter. Switching the crank to a single also allowed me to fit a classic-looking art deco style chainguard, which was modeled on a vintage French design, from Velo-Orange.

For the shifting, I used a set of Shimano Finger Tip spring-loaded levers. Since I only needed one lever, I removed the left side lever and replaced it with a bell -- this took a little work, as the mounting bolts were different sizes and threading. I fabricated a little adapter to make it possible. I really like the functional symmetry the setup provides.

For the stem and bars, I used a vintage Nitto I-beam stem, which has a great look for this style of bike, and Left Bank upright bars from Velo-Orange.

I added a tiny Gran-Compe ENE mini rack, which mounts right to the front brake. The rack adds a bit of support and stability to the wicker basket. I also installed the hammered fenders from V-O, which add a nice finishing touch.

For the saddle, I went with a Brooks B-67S (the shorter-nosed "ladies" model). The springs take the shock out of bumps, the saddle is wide and comfortable, and it looks fantastic. Also, using Brooks saddles is a way to always have my name on my bikes. I then made hand grips out of brown cotton tape and hemp twine coated in shellac. They match the saddle. 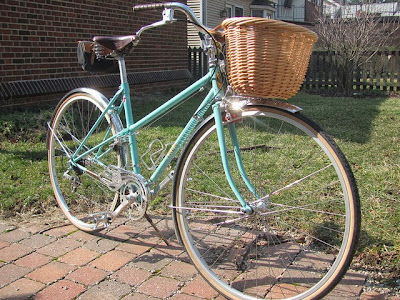 I was able to get reproduction Trek decals from Velocals.com which offers a huge array of decals for vintage bikes. The headbadge was re-useable -- I just carefully removed the sticky backing and replaced it with new double sided 3M adhesive tape. As a finishing touch, I outlined the lugs in gold paint.

My wife was thrilled with the bike when I gave it to her for our anniversary. She was particularly happy that I was able to equip it in such a way that it should really suit her needs and wishes. The bike is a real head-turner and gets complements anywhere we go. It has classic French style, is comfortable, and versatile. The original bike was a good and inexpensive place to begin, but in the end, it is even nicer in many ways now than it was when new. With new paint and wheels, along with assorted new parts and accessories, the total cost for the bike ended up being around $750. Considering just the cost of a lugged steel frame today, I think it was a pretty good deal.
Posted by Brooks at 7:20 AM