For the Love of Lugs

I'm a sucker for a lugged frame. I know that there is a lot of skill involved and a certain industrial/utilitarian aesthetic in a really nicely welded frame, but I never really learned to appreciate it.

No doubt, my preference for lugs has to do with the fact that when I first got interested in bikes, the best bikes were nearly always lugged. Until the mid 1980s, welded construction was generally a sign of a cheap bike -- usually heavy, made from mild steel, and probably sold in a department store. This was because the thin-walled, lightweight, high-strength steel tubing used in better bicycles would be destroyed by the heat of welding. Brazing with lugs uses a much lower temperature than welding, leaving the integrity of the tubing unharmed. But with the spread of TIG welding, along with new formulations of steel that could withstand the concentrated heat of welding, more and more quality bikes started showing up without lugs.

Another factor that led to the decline in lugs was the rise of mountain bikes. A lot of riders who came into bicycles through the MTB side of things didn't really care about lugs. Many mountain bikes were welded, and their riders didn't have the expectation of a quality bike being built any other way. By the end of the 80s, mountain bikes had virtually pushed road bikes off the showroom floors. Eventually, when road bikes made a comeback, they looked a lot more like MTBs. Aluminum frames were much more popular too -- and almost always welded. Practically a generation of younger riders came to bicycles without ever seeing a lugged frame.


To me, bicycles should not only be functional, but beautiful. Lugs make for a strong, reinforced joint while also adding a point of visual interest. A skilled and imaginative frame builder can sculpt the lugs to make a frame truly unique and special. Lugs also make a bicycle that is much more easily repaired. A crash-bent or dented tube can be replaced without impacting the long-term integrity of the frame.

Let's take a look at some of the classic production-made lugs that were commonly seen on bikes in the 60s and 70s. These first four examples were made with a stamped method. Stamped lugs tend to be a bit rougher and less consistent in quality, so building with stamped lugs takes much more time and skill to get a good final result than the investment cast lugs that would come later.


The next two lug sets, from the 1980s, were made with the investment casting process, which yields much more consistent results, and making the job of the frame builder a lot easier. A good builder will still take time to file them and thin the edges, and some will even re-shape the contours slightly to a more personalized style or preference, but some less-skilled (or less meticulous) builders might braze these up right out of the box with only minimal filing.

More recently, lugged frame building has undergone a bit of a resurgence, and several American designers have come up with new investment cast lugs that are available to builders all over the world. 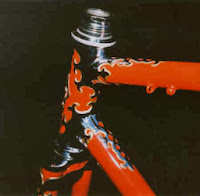 Some builders are well known for completely hand-cutting and shaping their lugs, either starting with something commercially available and modifying it (like the Mercian Anniversary bike shown above), or in some cases, starting almost from scratch with lug "blanks," which don't look much different from the pipe connectors found in the plumbing section of the hardware store. With these, a builder has the full freedom and a blank canvas to make a frame that doesn't look like any other. One vintage builder that was famous for truly intricate hand-shaped lugs is the British brand Hetchins. Some of the Hetchins lug styles are incredibly ornate, as seen to the left.

One current company that still regularly hand-shapes lugs from blanks is Mercian. Their Vincitore model is still made in much the same way as it has been made since the model's inception. Because the lugs are completely shaped by hand, no two are exactly alike, though there is a pretty uniform "pattern" or "style" to the Vincitore lugs. The particular model was introduced around 1964 (according to Mercian) but a similar lug pattern was seen on some Mercians going back to the 1950s.

Functionally, there isn't anything wrong with a welded frame, but certainly don't ask me to pay a premium for it. It can be exceptionally strong and in some cases can even save a few grams (though I believe the difference in weight is inconsequential). And I know that the tube mitering has to be perfectly spot-on with a welded frame because the joint is out in the open -- and if a builder isn't skilled with a torch there's no hiding it, so it certainly takes good frame building skills to do it well. Still, one cannot convince me that it isn't cheaper to weld than to braze with lugs -- as evidence, just notice how almost all production-line bikes (apart from carbon fiber) are now welded -- if it wasn't significantly cheaper to weld, then welded frames wouldn't be so common.

The preparation for lugwork goes way beyond good tube mitering and skills with a torch. There's much more labor involved. Lugged construction goes much deeper than pure functionality. It elevates the function to a more artistic level, and that really appeals to me. It always has.
Posted by Brooks at 11:48 AM