In my last post, I wrote about how I came to get really interested in bicycles at the tail end of a classic period when lugged steel frames were abundant, and beautiful and simple components ruled. But change was coming.

Shimano introduced its SIS indexed shifting in 1984, which set in motion a a trend that would lead to more and more integration and specialization in components, with less compatibility between brands. That introduction also marked the beginning of Shimano's dominance in bicycle components, while almost all the old guard European component makers except Campagnolo faded away (and even Campy was fighting for life for a while there too).

At that same time, mountain bikes were just starting to hit the mainstream, with production-made versions from Specialized and Univega first hitting the market around 1982 -- but by the end of the decade, they would almost completely push road bikes off the showroom floors. When road bikes would eventually make a comeback, they would much more resemble MTBs -- with welded frames, unicrown forks, and "compact" geometry.

But during all that time, as far as I was concerned, the old stuff was the good stuff. I never learned to appreciate a welded frame in the same way as a lugged one. A unicrown fork never kept my attention like a fork with nicely-cast crown. And nothing would capture my interest more than classic Campagnolo components.

I bought my first Campagnolo components -- a pair of Record hubs -- from the most fantastic garage sale a bike geek could imagine in a pre eBay world.

There had been, during the bike boom of the 70s, a great little bike shop in my home town, called J&N Cycles, where they specialized in nice high-end European bikes and components, many of which are now considered classics. I don't know exactly when it happened, but not too long before I started to discover "real" bikes, J&N had gone out of business. The owners, Jim and Nancy, got divorced and that meant the end of the bike shop. But that wasn't quite the end of the story. Jim, it turned out, lost the shop but held on to the stock. He filled his house and garage with the entire contents of the store. Bikes, parts, clothing, frames, wheels -- you name it, he had it. The inside of his house was kind of like an episode of A&E's Hoarders.

One summer weekend, almost a decade after closing the shop, Jim opened up his house and garage and had a sale. There were brand new bikes, mostly British, some still in boxes, from the mid 70s -- most of them with Reynolds 531 tubing and Campagnolo parts. There was at least one Teledyne Titan (one of the first titanium bikes) -- brand new, fully Campagnolo Nuovo Record-equipped. There were boxes and bins of all kinds of components, large and small. It was like walking back in time. For a young guy who was really into classic bikes and parts, it was awesome -- and my only wish was that I had enough money to really take in a bigger haul. Unfortunately, I was just in my late teens, so money was tight. 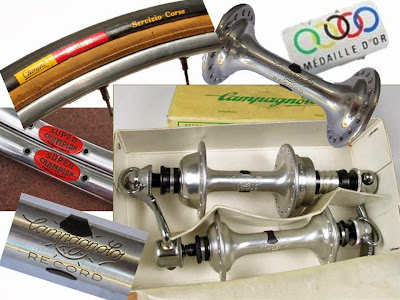 Still, the prices were low and I remember that weekend I bought some tools (a set of Campagnolo cone wrenches) the beautiful still-in-the-box Campy Record hubs, and a pair of impossibly light (260 grams) Super Champion Medaille d'Or rims. With those parts I built my first set of wheels. I don't know if it was because of the extreme lightness of the rims or because of my amateur skill (or lack thereof) in building wheels, but the wheels were always going out of true. After a few years of riding them and constantly re-truing them, I eventually disassembled them and re-built a new set of wheels with the same hubs (my wheelbuilding skills having improved greatly) -- more than 25 years later those wheels are still going strong. I took those hubs apart once for service a few years ago and the bearing races still looked great -- the date on the cones was 1974. Crazy.

I got to know Jim a bit and got his phone number to keep in touch, but he was a pretty reclusive guy on the whole. Now and again when I was home from college I'd pay him a visit and he'd let me look around through the boxes that still filled his house and garage. A couple of times, some of my college riding buddies and I made a road trip -- a pilgrimage of sorts -- to Jim's house to scavenge even more. Between all of us, we must have purchased a couple complete bikes, and enough parts to build a couple more.

At some point I lost his number and lost track of Jim, and I hardly recognize the old neighborhood anymore. I heard from someone that he died some time back, which kind of bummed me out. In the end I don't know if he was still living alone in that house surrounded by all his boxes, bins, and old bikes, or if he'd moved on, but sometimes I wonder what happened to all that stuff. Did relatives have any idea of its worth? Did a lot of it get pitched, given away, or auctioned off?

Any time I overhaul a set of hubs, I can't help but think back on it all and wonder.
Posted by Brooks at 7:07 AM