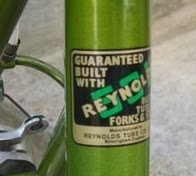 Look at great bikes from the classic era, and one thing you'll find on many of them is a little sticker announcing the manufacturer of the tubing used in the frame. And for a long time, more often than not, chances are that little sticker said "Guaranteed Built With Reynolds 531."

The history of Reynolds Tubing goes back almost to the beginning of the "safety bicycle." Alfred M. Reynolds invented the process for butted tubing in 1887 and went on to found the Patented Butted Tube Company -- later renamed Reynolds Tube Co. Ltd. Over the decades, the Reynolds name became virtually synonymous with quality bicycles.

The technical process of butting tubing is more than I want to get into in this article and can be found elsewhere pretty easily for those who are interested, but it essentially boils down to making tubing with a varied wall thickness -- where the tubing is thicker at the ends where more strength is needed, but thinner in the middle section to reduce weight. Many riders believe that butting also improves ride quality, resulting in a more "lively" ride, though that's a little harder to quantify. 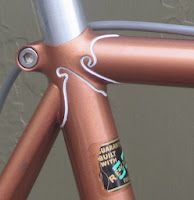 Earlier versions of Reynolds tubing were called HM, for "High Manganese," but in 1935 the company introduced "531" which, after butting, was regarded as a major breakthrough in strong, lightweight bicycle tubing. Butted 531 was considered revolutionary and quickly became the tubing of choice for most builders. The 531 name is a reference to the metallurgical components of the tubing - five parts manganese, three parts carbon, one part molybdenum. In general terms, it can be referred to as "manganese-molybdenum" or "manganese-moly" but should not be referred to as "chrome-moly." Some of the legends associated with Reynolds 531 are that it was used in the chassis on Jaguar XKEs, as well as chalking up 27 Tour de France victories.

Interesting note: According to Reynolds, the "proper" way to refer to the tubing is to call it "Five-Three-One" -- not "Five Thirty One" or "Five Hundred Thirty One." (The Custom Bicycle, Kolin and de la Rosa, 1979) Now you know.

Proponents of 531 claim that its real benefit is that it maintains more of its strength after heating, thereby building a stronger frame. Some people describe it as "forgiving," and so in the huge factories that were cranking out large numbers of bikes -- like Raleigh, Peugeot, and others -- the frames were still strong even if the attention to detail and care against overheating the tubing were lacking. In the hands of a skilled builder, there should be no question about frame integrity.

There were many variations in tube sets available in 531 -- such as DB, SL, Competition, Professional, ST, and more (and some of the names/designations changed over the years, so forgive me for not getting more specific!) -- all with different specifications or wall thicknesses to cater to particular applications -- whether general racing, time-trialling, touring, or even for tandems.

Without a doubt, Reynolds dominated the British frame building market. It would be difficult to find a British builder who used anything else (For those still building today, that is still true). In fact, for a long time, one could expand that Reynolds dominance out to most of the English-speaking world. Chicago-built Schwinn Paramounts, for example, used Reynolds exclusively. Reynolds also had a huge presence in France, despite the fact that there were several French producers of high quality bicycle tubing. Many French bicycle companies like Peugeot, Gitane, Motobecane, and others used Reynolds in their top models, and many of the great French constructeurs used it as well. While Italian builders generally preferred Columbus tubing, there were some -- Masi, Pogliaghi, Legnano, Frejus, and even some earlier Cinellis -- that used 531.

Another big development in Reynolds history was the introduction of 753 in 1975. This was a special heat-treated version of 531, which yielded much higher strength and allowed remarkably thinner-walled tubing -- only .3 mm in the center section! The claims by Reynolds were that it could save as much as 1 to 1-1/2 pounds over 531 (depending on the version). But to preserve the tubing's strength during frame building, it had to be constructed only with low-temperature silver brazing, and the necessary tolerances were so close that a builder had to be specially certified by Reynolds in order to use it. Not only that, but the tubing was so stiff that it could not be cold set after brazing -- which meant that the frame's alignment had to be perfect from the start. The certification process involved building a sample frame and sending it to Reynolds for destructive testing. Apparently, about one-half of those applicants seeking certification were denied (VeloNews 1983).

The dominance of Reynolds tubing started to fade some time in the 1970s. While most British builders continued to use Reynolds, Columbus tubing from Italy made huge market gains by the end of the decade, especially on racing bikes, and especially in the U.S. There is no one definitive answer for how or why that happened, but there are a few possibilities -- some of which were provided to me by members of the Classic Rendezvous group. Funny thing, I was told by more than one CR list member that asking about Columbus vs. Reynolds was opening a can of worms. That certainly was not my intent. Of course, there will be people who take sides and try to argue one is better than the other -- but I'm not interested in those kinds of comparisons. I simply wanted to figure out what led to the shift, and it seems there's no simple answer.

A big part of it was probably due to perceptions and fashions. Italy really dominated trends in racing bikes, and most of the Italian bikes coming into the U.S. were built with Columbus. Buyers in the US, seeing all those gorgeous Colnagos, De Rosas, Pinarellos, Guerciottis and more -- all with that little white Columbus dove decal on the seat tube -- couldn't help but associate the brand with great racing bikes. Racing legends like Eddy Merckx were riding on Columbus-tubed bikes, and that certainly helped the image too. The Columbo family eventually purchased Cinelli (no more Reynolds-framed Cinellis! -- although Cinellis were being being built with Columbus by that time anyhow) which meant that they also had the whole Cinelli lug business and a close relationship with Campagnolo -- and those factors may have played a role, too.

But as evidence of the change, note that when Schwinn moved Paramount frame production from Chicago to Waterford, Wisconsin, they also switched from Reynolds to Columbus. That was probably a big blow to Reynolds. Another builder I'll mention is Dave Moulton, who built almost exclusively with Reynolds when he was living and working in England. But when he moved his frame building operation to the U.S. at the start of the 80s, he switched to Columbus -- not because he felt it was better, but because it was what his buyers expected/demanded in a high-end bicycle frame.

So moving on, what happened? Where does the story go from there? The heat-treated 753, as great as it was, never gained huge success, being so exclusive and difficult to work with. And 531 suffered from one "flaw" that kept it from continuing its success in the current bicycle marketplace: It really is not recommended for welding -- and that is how most frames are built today. 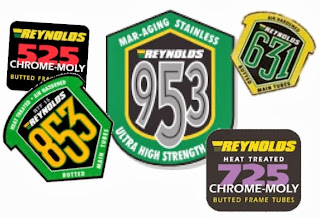 There are several developments from Reynolds to answer the weldability issue. There are newer "air-hardening" formulations that stand up to welding -- like 631 which Reynolds claims is the direct descendent of 531, and heat-treated 853, which is supposed to have the benefits of 753, with even more strength, and without the need for special frame-builders' certification. There are also the 525 chrome-moly and its heat-treated cousin 725 -- which are claimed by Reynolds to have a lot of the characteristics of 531 and 753, but again can be welded. The newest additions to the family are 953 and 931 stainless steel tube sets that have tensile strength well in excess of 753. It blows titanium away.

One final note in the Reynolds history is that it has gone through some major ownership changes in recent decades. By the 1970s, Reynolds (by this time, called TI Reynolds) owned Raleigh and most of the British cycle industry, including Sturmey-Archer and Brooks Saddles. In 1996, the company was taken over by Boulder, Colorado-based Coyote Sports. Coyote then filed for bankruptcy in 1999, most of the companies were sold off to investors, and in the following year a group of Reynolds managers purchased the tubing company from within, returning its base to England. The company is currently called Reynolds Technology Ltd. and has interests in a number of sectors outside of the bicycle industry, including motorsports and even oil drilling. In 2008, a special limited edition of classic 531 bicycle frame tubing was released. As I understand it, it is all gone now.

Despite all the developments and changes in bicycle tubing, there are a lot of people who still cherish the classic Reynolds 531. I still have a soft spot for it myself, and have several bikes that were built with it. For Retrogrouches like me, that little "Guaranteed Built With Reynolds 531" sticker just defines an era.
Posted by Brooks at 9:42 PM